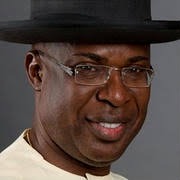 Prominent leaders in the South-South geo-political zone on Tuesday eulogized the Minister of State for Petroleum Resources, Chief Timipre Sylva, for bringing unparalleled brilliance and unbridled patriotism to the petroleum sector.

They also described Sylva as “a forthright, honest and consistent leader.”

At a gathering in Port-Harcourt, the leaders, under the aegis of South-South Leaders Forum (SSLF), heaped praise on Sylva for promoting regional trade development, encouraging the growth and development of the oil and gas industry and charting a new course for the Nigerian National Petroleum Corporation (NNPC).

“The petroleum sector is in good health. The signs can be found in energy security for Nigeria’s growing population and economy, rehabilitation of the Port Harcourt refinery, reviving of the Warri and Kaduna refineries and development of some petrochemical and fertilizer projects” the leaders said.

The leaders took note of the good relationship with President Muhammadu Buhari, National Assembly members and stakeholders in the oil and gas sector, commending the minister for addressing issues that bear on the development of the sector.

In a statement to journalists in Port-Harcourt, the chairperson of the Niger Delta People’s Movement (NPDM), Mrs. Ibifuro Thompson Tatua said the leaders spoke warmly about Timipre Sylva.

They praised the minister for doing everything that needed to be done to eradicate smuggling of PMS across the Nigerian boarders; complete the Gas Flare Commercialization Program; increase crude oil production; reduce cost of crude oil extraction; promote passage of the Petroleum Industry Bill; passage of Deep Offshore and Inland Basin Production Sharing Contract Amendment; increase domestic refining capacity and create large number of well-paying jobs in the country.

The leaders described the minister as a first rate politician with a great power of rapid calculation.

‘’Chief Timipre Sylva is an excellent man. He is addressing demand and limited domestic production’’

Specifically, the leaders eulogized Sylva for working tirelessly to ensure harmonious relations between host communities and oil industry operators in the country, the signing of the Final Investment Decision for NLNG Train 7 project, the commencement of the AKK pipeline project championed by the Nigerian National Petroleum Corporation (NNPC) and the implementation of the deregulation of the downstream sector of the petroleum industry.