The Female Squad of the Nigeria Security and Civil Defence Corps, NSCDC led by the Unit National Commander, CSC Imonikhe Oluwakemi has paid a familiarization and sensitization visit to the Alaafin of Oyo, Oba Lamidi Atanda on the effort to tide the stem of kidnapping and abduction of school children across the Country.

In a press statement e-signed and released to the National Association of Online Security News Publishers, NAOSNP by the Civil Defence’s National Public Relations Officer, DCC Olusola Odumosu stated that, “In line with the Commandant General’s safe schools initiative to tackle the Spate of attack and kidnapping of schools children for ransom in different parts of the country, the NSCDC National Female Squad has enlisted the support of Traditional Institution in their campaign against insecurity and kidnapping of school children for ransom.”

According to the Unit National Commander, CSC Imonikhe Oluwakemi who led her cracked Special Female Squad on a familiarization and sensitization visit to the Alaafin of Oyo, Oba Lamidi Atanda, the historic visit was necessitated by the Commandant General’s passion for safety of school children across the Nation which led to the establishment of the Female Squad to stem the tide of kidnapping and abduction of school children which Oyo state is not excluded.

She reiterated that as the custodian of customs and traditions, the Corps needs the support of all traditional rulers in the country for social reengineering, sensitization of the populace on security consciousness, love for country and upholding of good moral values to serve as a constant reminder on the ills of criminality and gains of new national orientation and patriotism. 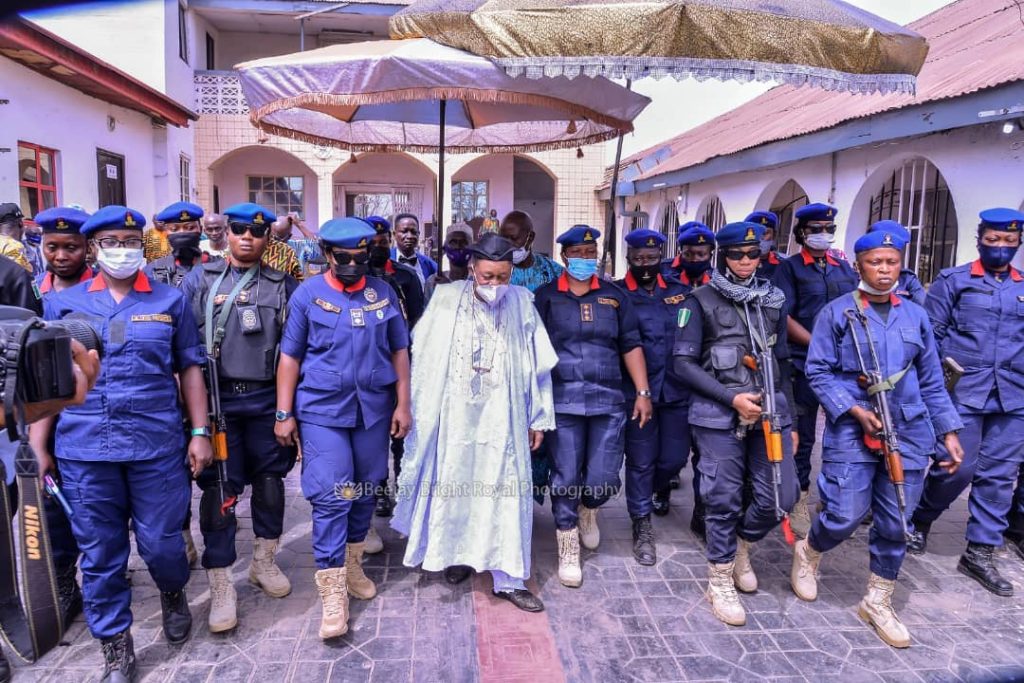 Imonikhe assures the Alaafin and the good people of Oyo State of the Commandant General’s total readiness in fighting the scourge of insecurity in Oyo State and that the Corps under his watch would continue to work very closely with the state government by providing credible intelligence information to nip crime and any infiltration or attack on schools in the bud.

The Alaafin of Oyo, Oba Lamidi Atanda in his remark, appealed to the CG to domicile the School Safety Initiative program in Oyo state particularly to ward off apprehension and unnecessary fear of attack towards enjoying a violence free learning environment for students and teachers.

While appreciating the NSCDC Female Squad for the familiarization visit, the Alaafin commended the NSCDC Oyo state command for living up to its responsibilities and specifically requested the Female Squad to fully participate in security operations in the state. He also assured of his full support for the safe school initiative and at the same time calling on the people of Oyo State to give maximum support to the Corps.

*SECURITY OF HYRO-CARBON INFRASTRUCTURE: CHIEF OF DEFENCE STAFF MEETS WITH GOVERNORS OF OIL PRODUCING STATES AND OTHER STAKEHOLDERS*