As the Muslim Ummah mark the Eid El Kabir celebration , the Corps Marshal of the Federal Road Safety Corps (FRSC), Dr Boboye Oyeyemi has sent his message of felicitation to all Faithfuls urging them to ensure full compliance with traffic laws. In his message, Oyeyemi preached love for one another, peaceful coexistence and care for the less privileged members of the society, saying these are virtues which people must imbibe during and even beyond the Sallah celebrations.

The Corps Marshal called on the Muslim Ummah to be wary of bad driving habits by obeying all established rules and regulations guiding use of roads in Nigeria. He emphasised that the wanton destruction of lives and property on the nation’s highways resulting from people’s impatience would been avoided, if commuters play cardinal role in checkmating the excesses of drivers who convey them from one destination to another.

Contained in a press release signed by the Corps Public Education Officer, Bisi Kazeem, the FRSC Corps Marshal was quoted to have expressed satisfaction with the general conduct of the motoring public regarding compliance with road traffic regulations since the commencement of the Eid El Kabir special patrol. He admonished the Muslims as well as the motoring community not to jettison the rules in the course of the celebration, but to continue to observe them in order to build on the gains made so far.

The FRSC Corps Marshal urged the Muslim Ummah to use the period of the celebration to offer special prayers for Allah’s blessings, wisdom and guidance. He restated the commitment of the FRSC to sustaining its present collaboration with other security agencies towards effective enforcement of traffic rules and regulations.

Oyeyemi further reassured that Commanding Officers across the country have been given directives to be on the alert during the Sallah celebration to provide all necessary support to members of the public and to particularly attend to whatever emergencies that may arise.

He called on members of the public to join the FRSC in its ongoing campaigns for safer road environment by promptly reporting any road and other emergencies they notice to the FRSC Call Centre through the toll free line: 122 or directly to the studio of the National Traffic Radio through the telephone lines:08052998090 or 09067000015. 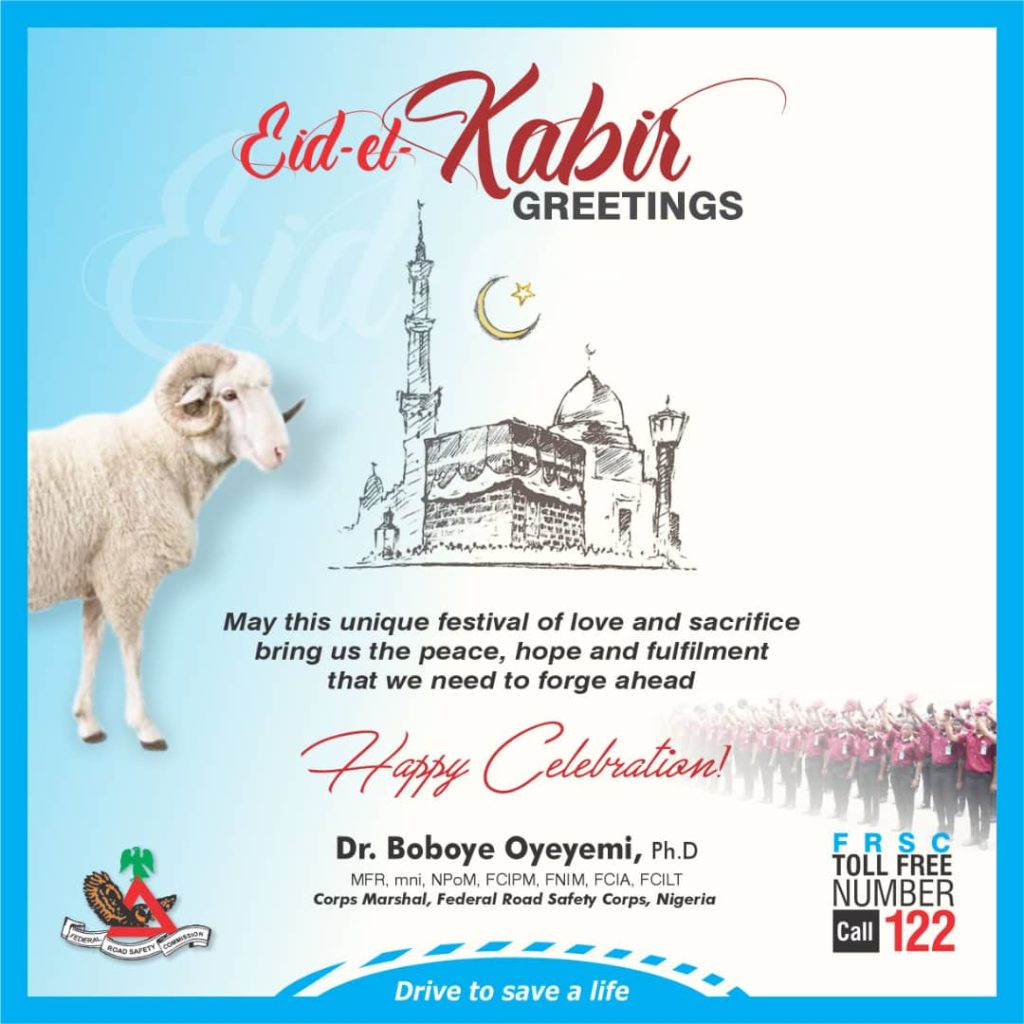 Concluding, the Corps Marshal wished all the Muslim Faithfuls Allah’s abundant blessings as well as prayed for peaceful celebration for all.

INTELLIGENCE-LED POLICING HAS PAID OFF, NOT NEGOTIABLE – IGP – As IGP Puts Operatives on Alert across Nigeria, Applauds Arrest of Notorious Kidnappers, Recoveries.