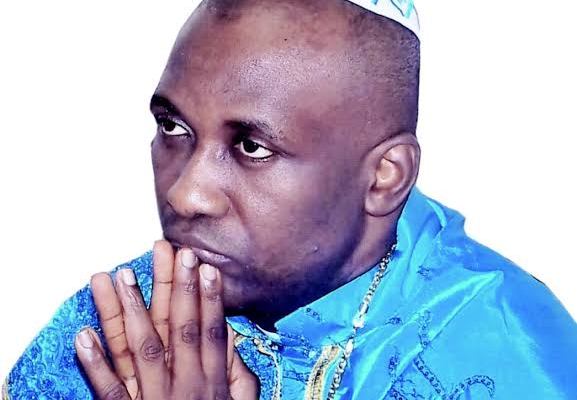 Written By Charles Okogene to and Charles Nwagbara

Superb singer, dancer, entertainer. You can ascribe all that to Primate Babatunde Elijah Ayodele. But he’s not your regular entertainer. The music is in-born and the entertainment is accentuated with such life changing moments you hardly can get from a musical show.

His sermon flows through the entertainment and his admonishments are embellished in songs and dance. No one in the 5000 strong Alayesori Cathedral of INRI Spiritual and Evangelical Church can contemplate boredom or sleep as the hours rush pass.

This is the scenario you meet three times on Sundays at Primate Ayodele’s INRI Spiritual and Evangelical Church.

The church based at the Oke Afa area of Lagos Slate somewhere between Isolo and Ikotun, is jam-packed with worshippers who throng the three (3) services the church runs each Sunday.

At INRI, the church services follow a routine. It begins with an hour long praise and worship session led by the Choir. This is followed by church announcements. Then sermon.

The sermon is followed closely by the Anointing Service, a moment every INRI worshipper looks forward to with gusto. On this special occasion, Primate Ayodele is assisted by his pastors who ensure that the over 5000 crowd at the Alayesori Cathedral is anointed for great exploits, for healing and spiritual cleansing.

The next stage is the Thanksgiving session which will leave every new visitor dumbfounded. A few congregants come forward to praise God for miraculous achievements during the week. However, what makes the session astounding is that INRI church choses the moment to bless her members.

Every other first Sunday, over ten widows and other indigent congregants go home with cash gifts to last them the next month. This was the case on the Sunday this reporters visited.

Visitors are not left out of receiving gifts from the church. This particular first Sunday, the Primate singled out a veteran journalist to bless. He showered him with gifts while recounting how helpful the veteran journalist has been to his ministry over the past twenty years.

And when everyone had thought the service was rounding off, the Primate exhibits his prophetic side. He begins to dole out messages to his congregants, the nation and even the world at large.

This first Sunday, the Primate has a warning to the Inspector General of Police, IGP, Usman Alkali Baba. He admonishes him to pray against indictment and possible removal from office. He  quickly back in his normal elements as he calls for President Buhari to step down as Minister of Petroleum for foisting hardship on the Nigerian people through fuel scarcity. He also tongue-lashed One Love movement founder, Sat Guru Maharaji for insulting him(Ayodele).

It did not stop at sermons and what was given to select members during church service. Right outside the church auditorium, church officials are busy handing out food and food items and cash to indigent worshippers and visitors.

On this first Sunday of March, the first rains of the year came in torrents, forcing this reporter to join the third service.

He did not also fail to tell a certain politician he described as ‘dhaky, shaky’ to persh his ambition of succeeding Buhari, to forge the ambition.

All in all the service was worth the time we spent.