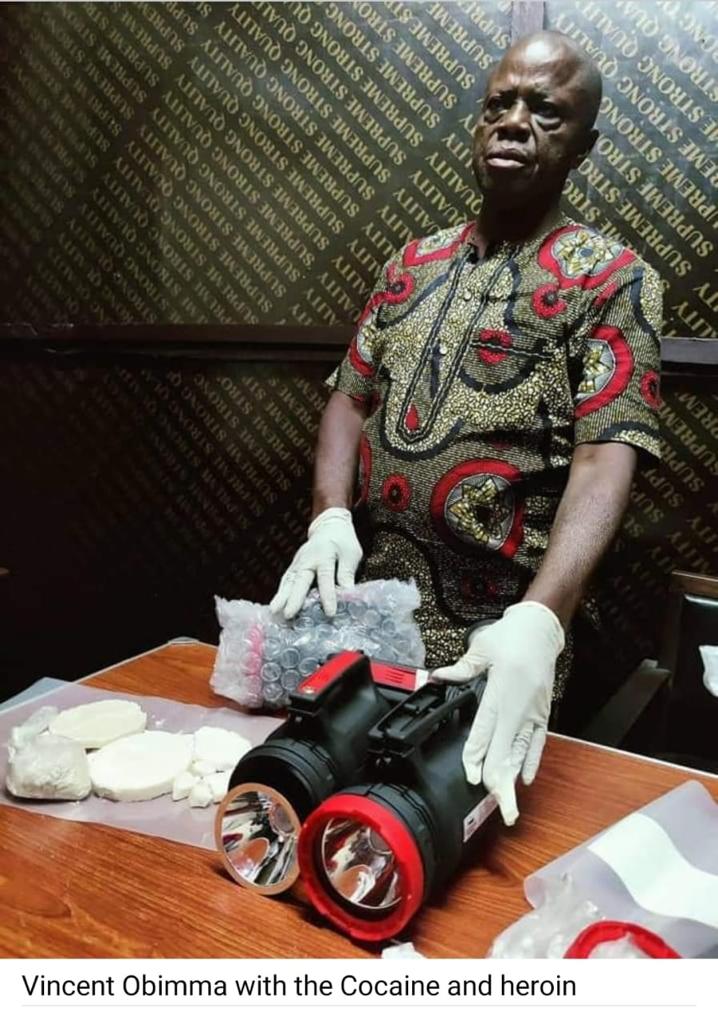 Operatives of the National Drug Law Enforcement Agency, NDLEA have arrested the General Overseer of Christ Living Hope Church, Rev. Ugochukwu Emmanuel Ekwem at the Murtala Muhammed International Airport, MMIA, Ikeja Lagos while on his way to a three-week crusade in Nairobi, Kenya, with 54 sticks of drugs wrapped around his body.

In a press statement e-signed and released to the National Association of Online Security News Publishers, NAOSNP by the Agency’s Director of Media and Advocacy, Mr. Femi Babafemi stated that, “Operatives of the National Drug Law Enforcement Agency, NDLEA, have arrested the General Overseer of Christ Living Hope Church, Rev. Ugochukwu Emmanuel Ekwem at the Murtala Muhammed International Airport, MMIA, Ikeja Lagos while on his way to a three-week crusade in Nairobi, Kenya, with 54 sticks of drugs wrapped around his body.” 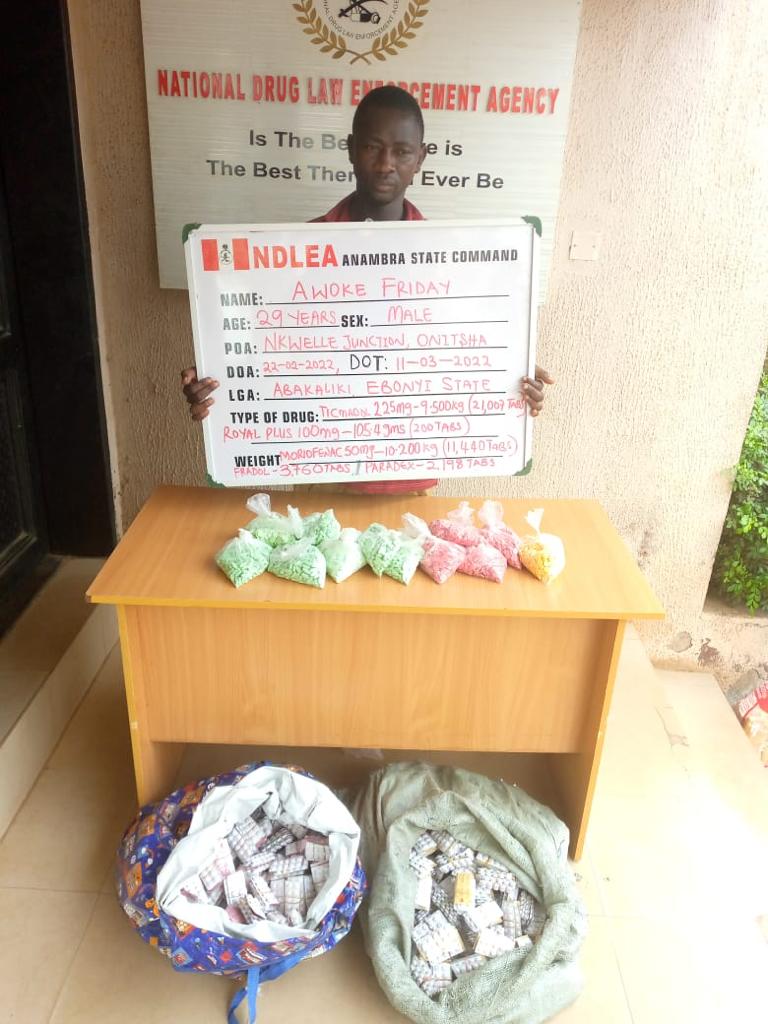 According to Babafemi, “The youthful and popular preacher who has his church headquarters in Isuaniocha, Mgbakwu road, Awka, Awka North LGA, Anambra state and two other branches in Lagos and Abuja, was arrested on Monday 7th March, during the outward clearance of passengers on Ethiopian Airlines flight to Nairobi via Addis Ababa.”

“When tested, the 54 sticks proved positive to cannabis. The clergyman confessed during preliminary interview that he packed that quantity of illicit substance on his body to use during his three weeks crusade in Kenya.” 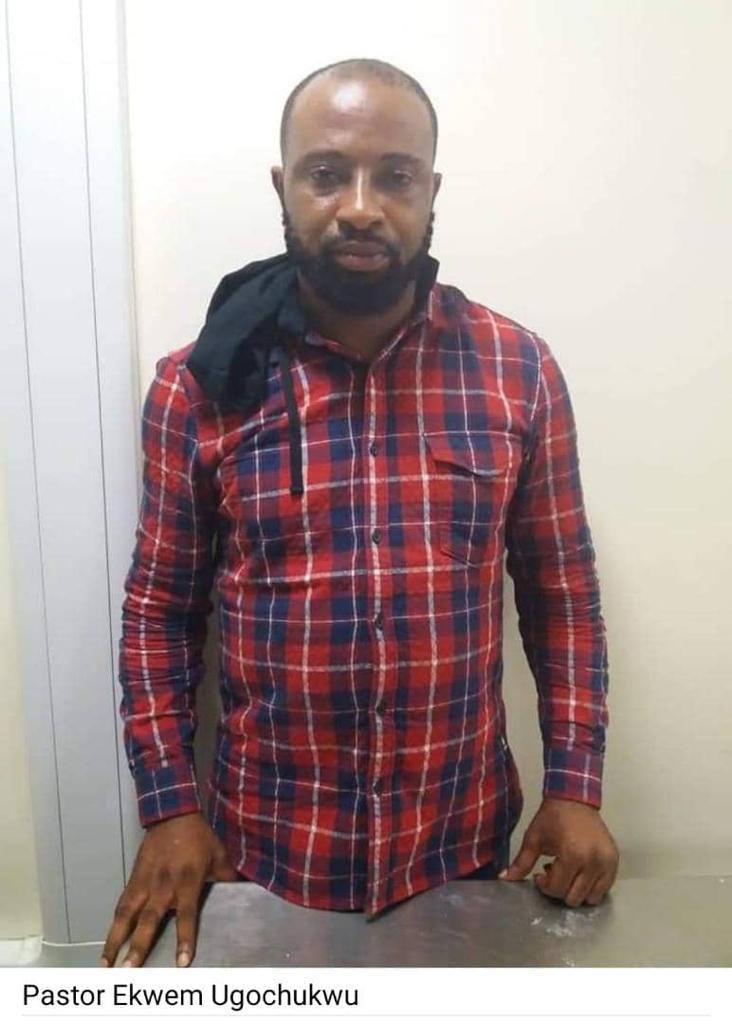 On the same day, another passenger, Nnakeanyi Chukwuka King who arrived the airport on Ethiopian Airlines flight from Sao Paulo, Brazil via Addis Ababa was intercepted during the inward clearance of passengers at the E-Arrival Hall of the MMIA. During a search of his luggage, forty (40) parcels of Cocaine concealed inside bottles of body cream with a gross weight of 9.70kg were recovered from the suspect.

Three days later, Wednesday 9th March, another passenger on Ethiopian Airlines flight to Italy, Mr. Edo Blessing was intercepted at the Departure Hall of the airport with 2, 090 tablets of Tramadol 225mg and Flunitrazepam. The suspect who hails from Edo state but lives in Italy claimed ownership of the recovered psychotropic substances.

Also on the same day, operatives arrested a freight agent, Rafiu Abbas at the NAHCO Export Shed of the airport when he presented a cargo containing 19.15kg cannabis going to London. The illicit substance was concealed inside plastic containers labelled as “African Dishes” and packed in a bag.

In a related development, a 63-year-old Vincent Obimma was on Friday 11th March arrested with 350grams of cocaine and 150grams of heroin by NDLEA operatives at a park in the Apapa seaport corridor in Lagos. The drugs were hidden in industrial torch packets heading to Kano, Kano state.

Meanwhile, a drug dealer in Kaduna state, James Okenwa has been arrested in a follow up operation at Central Market, Kaduna. He admitted the ownership of 1,807 bottles of cough syrup with codeine that were earlier recovered from two suspects at tollgate. At the point of his arrest, another 152 bottles of the drug were recovered from his vehicle. He has accepted ownership of all the 1,959 bottles of the codeine syrup.

In Yobe state, two fake security agents: Akalonu Justin and Azimbi Festus who were coming from Onitsha and heading to Maiduguri, Borno state have been arrested with 25 blocks of Cannabis Sativa weighing 12 .5kg and 1, 598 bottles of Codeine Syrup weighing 159.8 Liters, while 85kg of cannabis was also recovered from the warehouse of a notorious drug dealer in Pawari area of Damaturu, the state capital on Thursday 10th March.

In Anambra state, a total of 38,605 tablets of assorted opioids were recovered from a 29-year-old drug dealer, Awoke Friday at Nkwelle junction, Onitsha on Friday 11th March with the support of men of the Nigeria Police.

While commending the officers and men of the MMIA, Apapa Port, Kaduna, Yobe and Anambra Commands of the Agency for the impressive seizures and arrests in the past week, Chairman/ Chief Executive of NDLEA, Brig. Gen. Mohamed Buba Marwa (Retd) charged them and their colleagues across the country to stay focussed and intensify efforts to rid Nigeria of illicit drugs and substances.