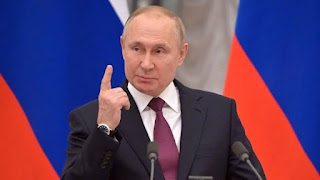 One major story that has featured on the headlines of every nation around the world is the invasion of Ukraine by Russia’s President Putin two weeks ago.

Several destructions have been recorded in Ukraine while Russia has also had a fair share of losses amidst the invasion that has been described as war by world leaders.

However, news coming out of Russia seems not to be palatable for President Putin. According to information reported by several news outlets, a ‘palace coup’ against President Putin is likely to occur if this doesn’t stop soon.

According to a post by Nzherald, there are possible indications that Putin may be ousted from his position as president of Russia considering the fact that he has lost grip on power.(https://www.nzherald.co.nz/world/ukraine-war-putin-losing-his-grip-on-power-is-fuelling-rumours-of-a-coup/3FJMY67NVK2RD2L2XTHOYMD7WI/)

If this is anything to go by, it’s important to make reference to Primate Ayodele, a Nigerian prophet who prophesied the invasion of Ukraine by Russia, and warned President Putin twice against an assassination attempt on his life if he doesn’t stop the war.

Primate Ayodele made this warning two days after Russia invaded Ukraine and one week after the invasion, warning Putin of an assassination attempt on his life even when people never thought this could come up anywhere.

These were his words when he first made the warning,

These were his words the second time

‘’President Vladimir Putin of Russia has gone against God’s warnings. I warned him to put an end to the invasion of Ukraine but he didn’t listen. Just like Pharaoh whose heart was hardened against God’s children but perished, Putin will not go scot-free.

‘’I still insist that this war will not lead to third world war, it will come to an end but President Putin will not go scot-free, a Russian soldier will be used to execute the plans to take his life,’’ (https://dailypost.ng/2022/03/04/russia-ukraine-war-putin-wont-go-scot-free-soldierll-assassinate-him-primate-ayodele/)

With the situation turning against President Putin, let’s take a look at the possibility of Primate Ayodele’s prophecy coming to pass against Russia’s president.

The news making rounds has highlighted a possible ‘palace coup’ that may see President Putin ousted from power in his country due to the fact the every Russian including the elites and average citizens are affected following sanctions by countries where they have their businesses and as it is known, President Putin is a tough man who may decide to wrestle with military chiefs in the process of the coup. This may lead to an assassination attempt on his life to fulfil Primate Ayodele’s prophecy.

Though based in Nigeria, Primate Ayodele is a living testimony that the spirit of prophecy isn’t limited to a nation or continent, it is a global gift. Before the invasion took place, Primate Ayodele was the only prophet who warned of an escalation of the Ukraine and Russia crisis in his 2022 prophecies which were released on December 22, 2021. It is also on record that he warned of destruction 48 hours before Russia finally invaded Ukraine and when the invasion occurred till now, he is still the only prophet that has been sending warnings to President Putin.