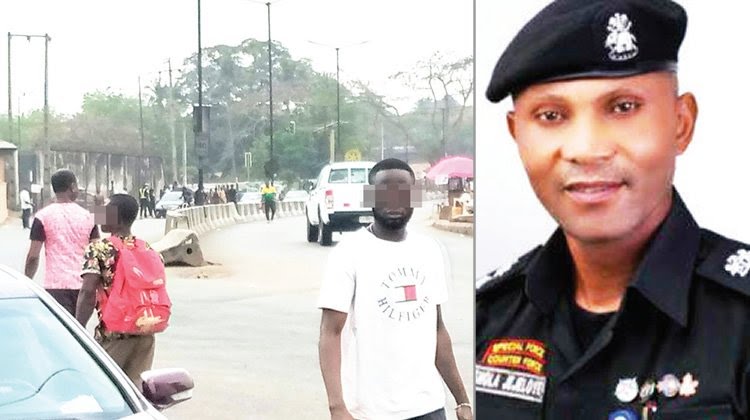 Lagos State Taskforce officials on Monday 21st of February, 2022 went berserk as they attacked Mobil Filling Station at Abule Egba on Lagos Abeokuta Expressway in the early hours of the morning on the process injured a motorist who came to buy fuel and the Police Officer attached to the Station on special duty.

According to Mr. Adebisi Babatunde Joseph who was stabbed in four places including his head as soon as the Taskforce Officers and the thugs they were using to arrest motorcycle a.k.a Okada arrived at the Filling Station, the thugs started to attack anyone on sight adding that as at that time he came down from his car to tell the pump attendant to sell fuel for those that came with their vehicles as he was only selling for those with kegs. Explaining further Mr. Joseph said as soon as he turned back to go and enter his car, the thugs just rushed him and stabbed him several places as if they had issues before and he slumped only to regain his consciousness in the hospital.

Our correspondent gathered that when the thugs went to the back of the Filling Station to carry motorcycles that the owners have parked there for a long time that was when the Police Officer was also attacked by the stick wading thugs because he told them that the motorcycle has been parked there for long.

When this reporter called the Public Relation Officer (PRO) of Lagos State Taskforce Mr. Raheem Gbadeyanka to comment on the incident, he vehemently denied the allegation saying Taskforce officials can never enter Filling Station to arrest motorcycle adding that it was the Filling Station management that invited thugs by themselves.

Mr. Sunday Adeyemi a resident of Santos Avenue, beside the Petrol Station said the recent actions of Lagos Taskforce officials calls for concern since they have turn Abule Egba to a battle ground and wondered why they allowed Okada to operate under Oshodi bridge where the Okada riders are carrying Toll-gate passengers under their nose unchecked.

“Lagos State Taskforce officials should be call to order because their recent activities at Abule Egba is worrisome before the youths will revote against them”. “Okada riders are right now under Oshodi bridge carrying Toll-Gate passengers under their very nose.”

Nestlé Nigeria Plc has announced its financial results for the year 2021.