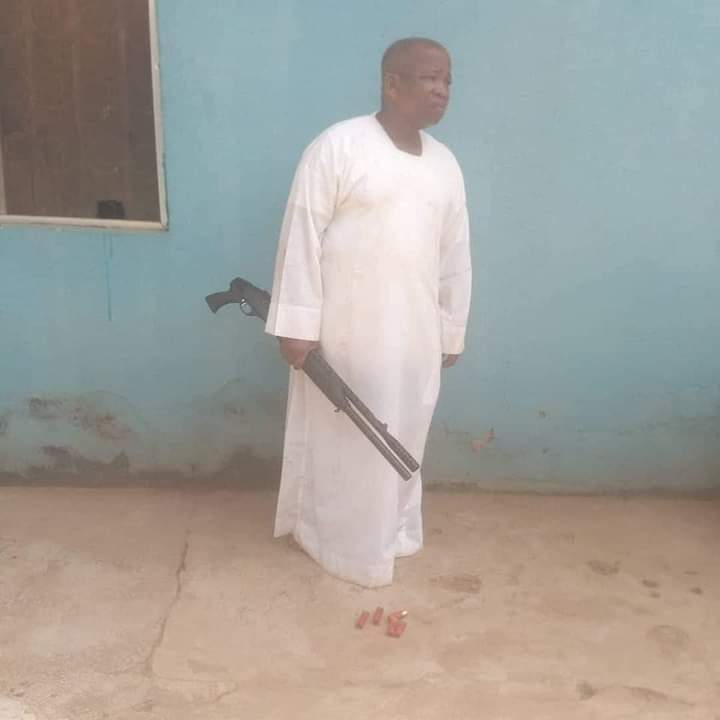 Ogun State Police Command has arrested the sheperd in charge of a Celestial Church of christ Jesu Yan parish, situated at Olambe junction Akute Ogun state for attempted murder and unlawful possession of a firearm.

In a statement by the Command’s Public Relations Officer, DSP Abimbola Oyeyemi, the suspect, Pastor Peter Ayodele Omope was arrested following a distress call that one Deji Olaketan and another 18 year old Kemi Johnson took their madam whom they are working with as driver and housemaid respectively to the airport to board plane and after dropping  her, they took the vehicle back to the house of their boss relation as directed.

However, on their way home, they were informed that the Oro sacrifice was ongoing at Olambe area which precluded them from passing through the area. They then saw a Celestial church where vigil was ongoing and decided to join them since it was already late in the night.

While they were at the entrance of the church, the suspect who happened to be the shepherd in- charge came out with a pump action rifle and before they could utter any explanation, he shot Kemi Johnson on the leg.

The Police then arrested the suspect and rushed the victim to Ifako Ijaye general hospital, from where she was referred to Lagos university teaching hospital and finally to Orthopedics Hospital Igbobi Lagos.
The pump action rifle and five live cartridges had been recovered from the suspect.

The Suspect confess to the scene of the crime.

The suspect in pitied however regretted his action ,he said ,” if I ever come out alive from this case I will glorified the Almighty God”.

Meanwhile, the commissioner of police, CP Lanre Bankole, has ordered the immediate transfer of the suspect to state criminal investigation and intelligence department for discreet investigation.