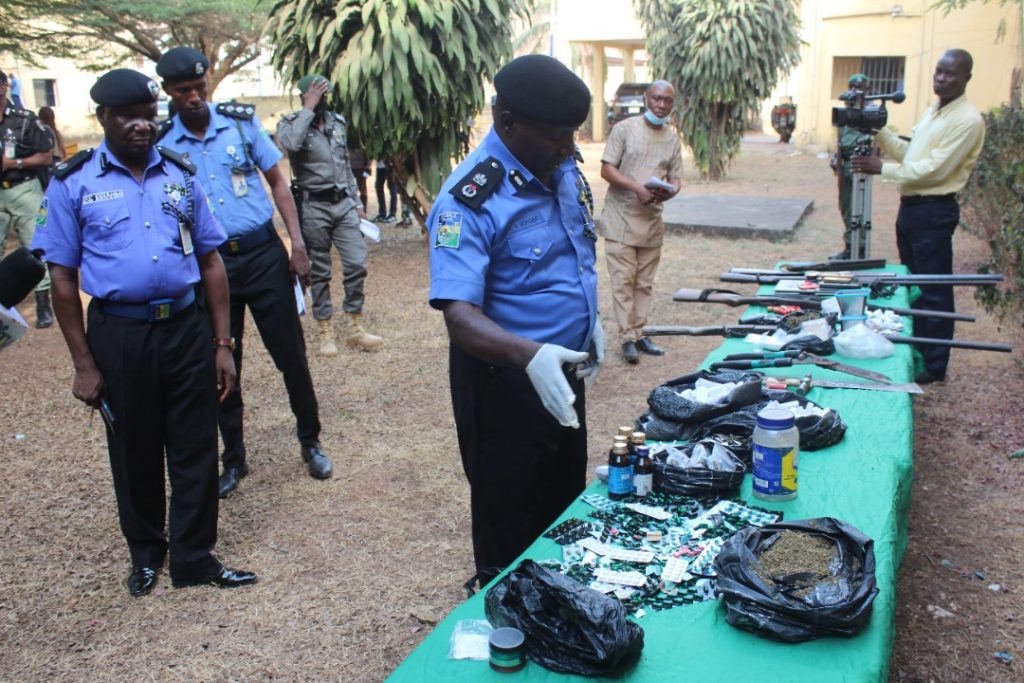 Delta State Police Command was On February, 12 2022, one Chikwudi Emerenin ‘m’ age 27years was arrested in the State. The suspect was
arrested by operatives of the Command while acting on intelligence
gathered that he and his gang were hibernating somewhere in Aboh in
Ndokwa East LGA. The Suspect who is an escapee from Owerri prison, was
arrested on 12/2/2022 at about 2100hours and he is suspected to be
part of the syndicate that killed the late Police officer Chris
Kpatuma in Agwa clan, Oguta Local Government Area of Imo state. He
also stated that he is related to the late police officer and that the
leader of the gang is called “Mega Bush”. The suspect also revealed
that the late officer was killed because he was a strong stakeholder
and a titled man in the community and owing to the fact that he was a
Retired Police Officer, they saw him as a threat to their Biafra
Struggle hence they decided to kill him. The Suspect Chikwudi Emerenin
is also suspected to be part of the syndicate that beheaded a
vigilante member in Owerri and used his head as ball some time ago.
Investigation is ongoing. 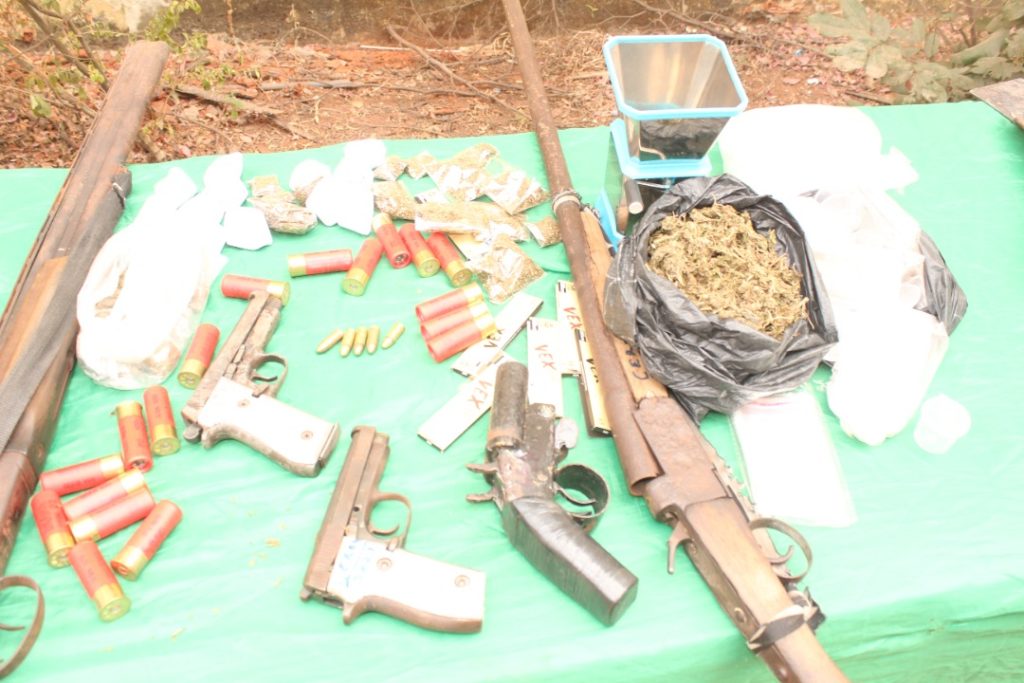 ALSO RESCUE OF KIDNAPPED VICTIM/RECOVERY OF SUSPECTED STOLEN VEHICLE: On
13/02/2022 at about 1920hrs, Police Divisional patrol teams while on
routine stop and search duty along Warri-Ughelli Expressway Agbarho,
flagged down a white colored Toyota Camry car with Reg No. JRT 795 TK
with four (4) occupants. Upon sighting the Police, they zoomed off and
the teams gave them a hot chase, consequent upon which the driver and
the other occupants abandoned the said vehicle along Agbarho
expressway and fled into the bush, abandoning one Shola Korokoro
Kemepatei ‘m’ age 47. The victim stated that he was kidnapped at
Orhuworhun in the early hours of Sunday 13/2/2022. Manhunt for the
fleeing suspects is ongoing. 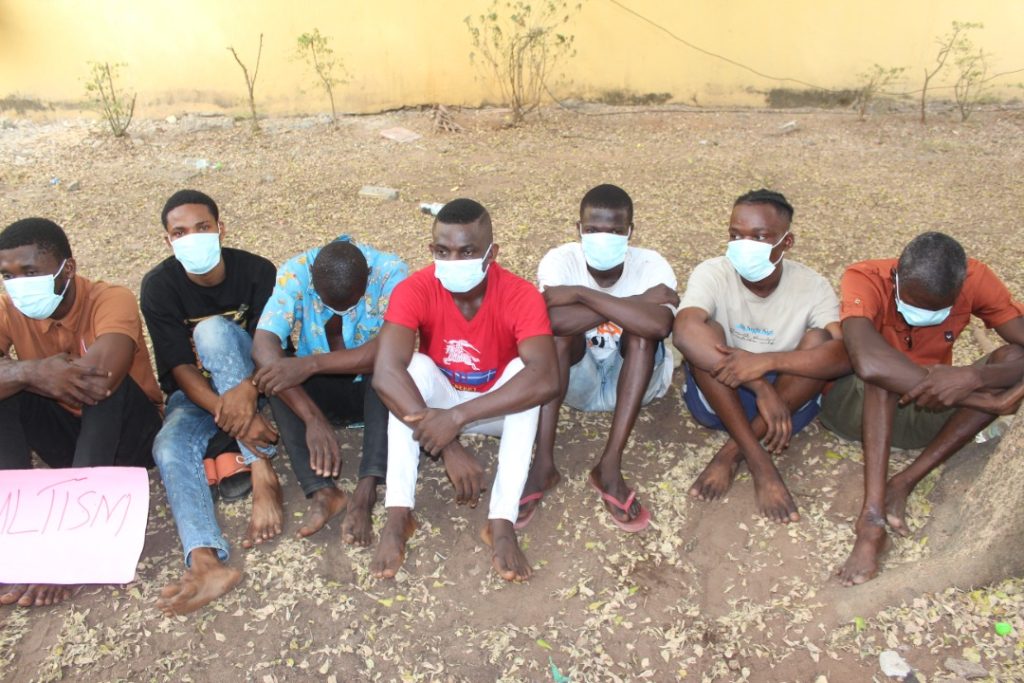 ALSO ARREST OF SUSPECT INVOLVED IN THE MURDER OF ONE MARY NGOZI, A POS
OPERATOR AND NOLLYWOOD ACTRESS IN BOJI BOJI OWA: On 14/02/2022 at
about 1640hrs, a distressed call was received by the DPO Owa-Oyibu
that some suspects who robbed and shot some POS operators at
Efeizomor Street, near Pekky Hotel in Owa-Oyibo have been arrested and
that they are being lynched by an angry mob. Police Patrol teams were
quicky mobilized to the scene where the two suspects namely, Onyeka
Ifeanyi ‘m’ aged 19 yrs of No.10 Ije Street Agbor and Bright Micheal
Kester ‘m’ age 20yrs of No.5 Imudia Street Agbor were rescued from the
mob and brought to the Station, One cut-to-size double barrel gun was
recovered from them. Upon interrogation they confessed to have robbed
several POS operators and also confessed that their gang members were
responsible for the robbery and murder of one Mary Ngozi, a POS
operator and Nollywood actress at deeper life road on 7/12/2021. One
of the Suspects Bright Michael Kester was taken to General Hospital
for treatment due to injuries sustained from the Mob attack but gave
up the ghost while receiving treatment. Investigation is ongoing.

ALSO ARREST OF MURDER SUSPECTS: On the 10/02/2022 at about 1400hrs, one
Gift Ohanozoeze ‘f’ of no. 42 camp 74 behind Ibori golf Asaba,
reported that on same date at about 1030hrs, her little baby boy
named Obinna Adeeze aged 1yr & 7months, schooling at Arise and Shine
nursery and primary school camp 74, was flogged by a Teacher named
Emeka Joshua Nwogbo ‘m’ age 24years, after which the baby fell ill
and was taken to Federal Medical Center Asaba for treatment. Sadly,
on 12/02/2022 at about 0830hrs, the little boy died while receiving
treatment. The suspects Emeka Joshua Nwogbo and the proprietress Mabel
Nwagbo ‘f’ age 66yrs are currently in custody and will be charged to
court as soon as investigation is concluded. 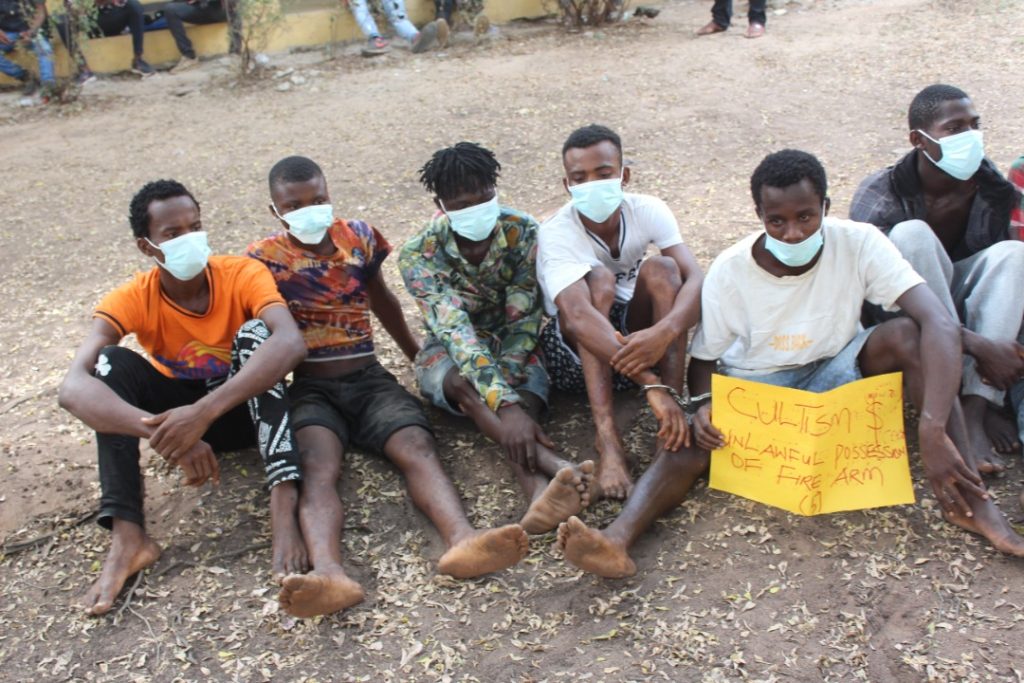 ALSO ARREST OF SUSPECTED CULTISTS/ARMED ROBBERS AND RECOVERY OF LOCALLY
MADE PISTOL/CARTRIDGE/ CUTLASS/CUTTER/HAMMER: On 11/02/2022 at about
0400hrs acting on a tip off that a group of boys suspected to be armed
robbers/cultists were hibernating in a four-bedroom apartment at
Akperhe-Olomu Community in Otu-Jeremi, Ughelli South LGA. Operatives
from Otu-Jeremi Division were detailed to raid the said hideout during
which nine (9) suspects were arrested. One cut to size gun, one (1)
live cartridge, one (1) cutlass, one (1) cutter and one (1) hammer
were recovered. Investigation is ongoing. 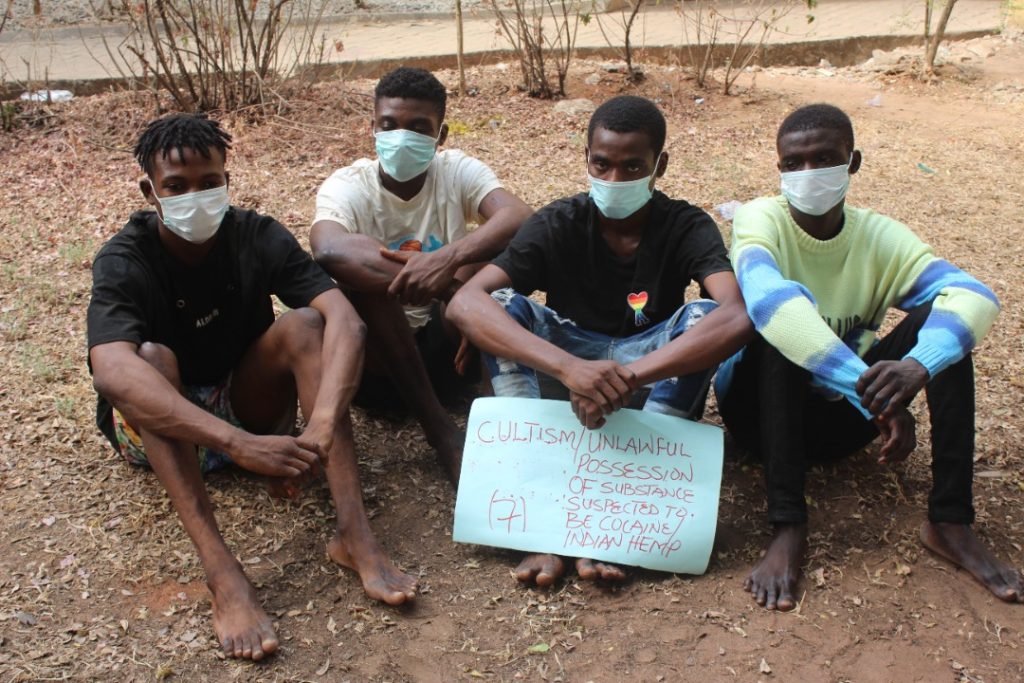 ALSO ARREST OF ELEVEN SUSPECTED CULTISTS, RECOVERY OF TWO PUMP
ACTION GUNS AND TEN LIVE CARTRIDGES: Sequel to the Cult clash between
Eiye and Black Axe confraternity in Agbarho, Ughelli North LGA that
started on the 6/2/2022, which led to the death of five persons, i
directed the Command Anti-Cult Unit (SACU), Dragon Patrol Teams and
Police Operatives from Agbarho Division to proceed to the said town
with a view to ensuring that sanity is restored in the Community.
Consequently, the DPO Agbarho Division led the teams deployed on an
intelligence led operation during which eleven suspected cultists were
arrested, two (2) Pump action guns, one (1) cut to size locally made
gun, eight (8) expanded cartridges and ten rounds of live cartridges
were recovered. 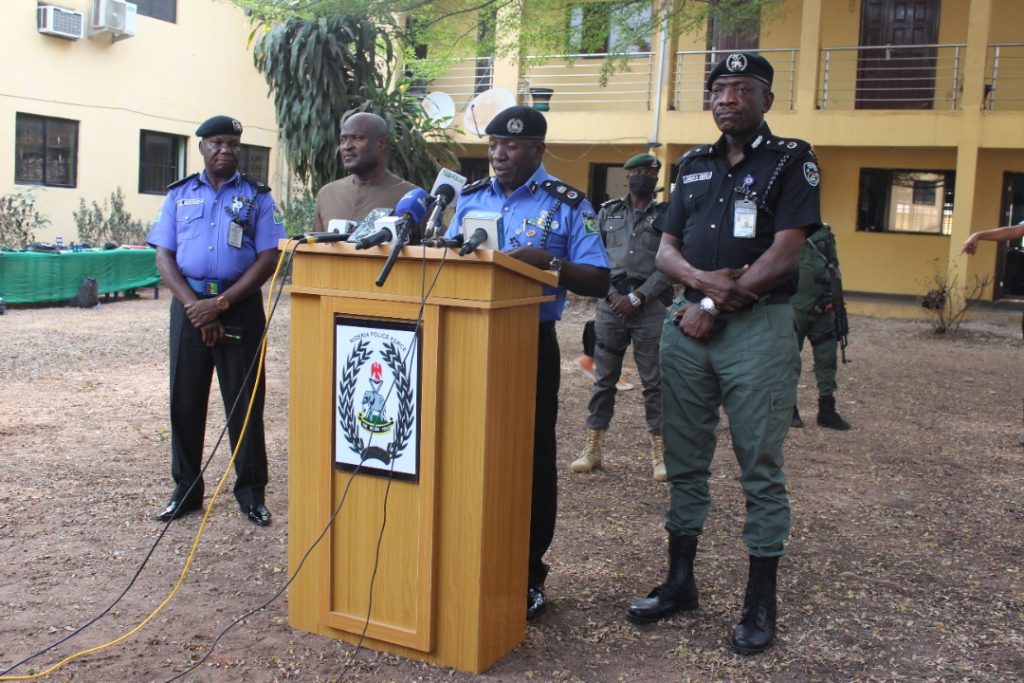 ALSO ARREST OF A MURDER SUSPECT, DRUG BARON/INDIAN HEMP DEALER AND
CULTIST: On 1/2/2022 at about 0900hrs, acting on intelligence, the
Command Crack Surveillance team raided a black-spot in Okwuchi
quarters Eku, during which one Larry Onifon ‘m’ age 24yrs was
arrested. The Suspect who claimed to be a fashion designer was
arrested in the drug Neighborhood and the following exhibits were
recovered: Forty (40) packets of 100mg Tramadol, eighty-nine (89)
wraps of weeds suspected to be Indian hemp, four (4) sachets of
Swinol, three (3) containers of Loud, fifty-five (55) wraps of
substances suspected to be cocaine. The suspect Larry Onifon also
stated that the cartel popularly called “OBJ cartel” is owned by one
of the fleeing suspects named “OBJ”. Investigation is ongoing.
ALSO ARREST OF SUSPECTED KIDNAPPERS: On the 22/01/2022 at about 2130hrs,
a kidnapped victim (name withheld) of Uvwiana Road, Agbarha reported
that he was kidnapped along Esiso Street Agbarho in Ughelli North LGA.
The victim further stated that in the process of transferring him to
another vehicle, he escaped from his abductors. Consequently, on the
23/01/2022 at about 0930hrs, the victim spotted one of the hoodlums
and he immediately alerted the Command. Police Operatives were
detailed to the area where the suspect named Godstime Rufus “M” age
22yrs of Esiso street Agbarho was arrested. Upon further interrogation
and investigation, the suspect led operatives to their hideout where
two other suspects namely, Stanley Efeme “M” age 21yrs of NEPA Line
and Davidson Esiso “M” age 35yrs of no. 25 Osah Street Agbarho were
arrested and they were all identified by the victim. Investigation is
ongoing.
CONCLUSION: While assuring residents of adequate security, i wish to
use this medium to solicit for continuous understanding, support,
cooperation and collaboration with the State Government and Police
Authorities in the fight against crime and criminality. More so ,
parents and guardians are urged to monitor, guide and caution their
wards to desist from any cult related activities and the use or sale
illicit of drugs, as the Command under my watch will not relent in
arresting anyone found wanting and ensuring that they are prosecuted
accordingly.

The Command is more than ever before determined to fulfil its core
mandate which is to protect life and property, maintenance of law and
order and as such will not take it lightly with anybody who tries to
cause mayhem of any kind in the State.
Thank you all .