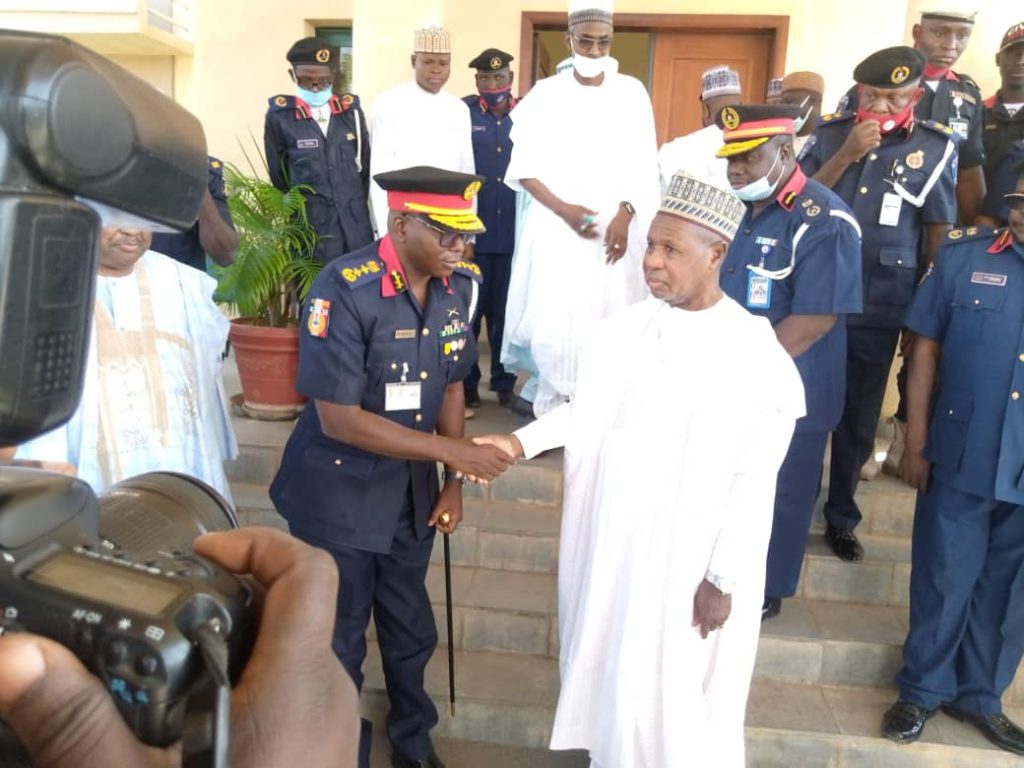 The Commandant General of the Nigeria Security and Civil Defence Corps, Dr Ahmed Abubakar Audi has reteirated the corps continuous strategic training and retraining to upscale the fight against insecurity and terrorism across the Country.

In a press statement e-signed and released to the National Association of Online Security News Publishers, NAOSNP by the Corps’ Director of Public Relations, DCC Olusola Odumosu stated that, “The CG NSCDC, Ahmed Abubakar Audi, PhD, mni, has vowed to upscale the security hardwares of the Corps with commensurate training and retraining of personnel to match up with the current wave of insecurity and attacks on security operatives in the country.”

According to Odumosu, “He gave this assurance while on a visit to the Katsina state Governor, Aminu Bello Masari, to commiserate with him on the recent killings of security operatives and other innocent citizens of the State when gunmen suspected to be terrorists attacked a military base in Shinfida community, Jibia Local Government Area of Katsina State and killed a soldier and an officer of the Nigeria Security and Civil Defence Corps.”

“Dr Audi lamented the vicious way bandits stormed the military camp in their numbers, shooting sporadically at everyone in sight and burning down two patrol vehicles and hijacking another to transport stolen foods items to their base.”

“He extolled the governor for supporting and providing an enabling environment for all security agencies within the state to operate, vowing that NSCDC would spare no effort in ensuring total decimation and annihilation of all terrorist groups causing mayhem in the country.”

“The brazen attack on security operatives in recent times is one too many and must be resisted on all fronts to prevent further loss of lives of our personnel out there on the field working assiduously to keep the country intact at the expense of their lives. It is high time we go back to the drawing board to develop new methods and tactics to win this assymetric warfare that is fast consuming our people” the CG said.

He assured the executive Governor of total victory against bandits and all extremist groups terrorizing the country and that the Corps under his leadership would continue to work closely with the state government by providing credible Intelligence information to nip insecurity in the bud.

Reiterating that NSCDC would continue to synergize with other security and law enforcement agencies in maintaining internal peace and security through concerted effort to improve the professional skills and dexterity of NSCDC operatives through a highly blended training and retraining program for personnel.

Responding, the executive Governor of Katsina, Aminu Bello Masari commended Dr Audi for the professional experience he brought to bear in achieving so much within such a little period of his appointment as the third substantive CG of NSCDC and promising to give total support to the corps in carrying out their duties and operating successfully without hitches.

The CG only recently inaugurated a sixteen member committee headed by Professor S.B. Mohammed, a Professor of Crime and Political Sociology and Development and Vice Chancellor Nasarawa University to develop standard curriculum for all NSCDC training colleges across the country with a view to entrenching professionalism on service delivery and building a global elite Organization that can compete effectively with its contemporaries anywhere in the world and discharge its mandate diligently with every sense of civility and integrity within the ambit of the law.

In the CG’s entourage were Commandants of Katsina State, Zamfara, Kano and Jigawa as well as the Commandant, College of peace and Disaster Management.