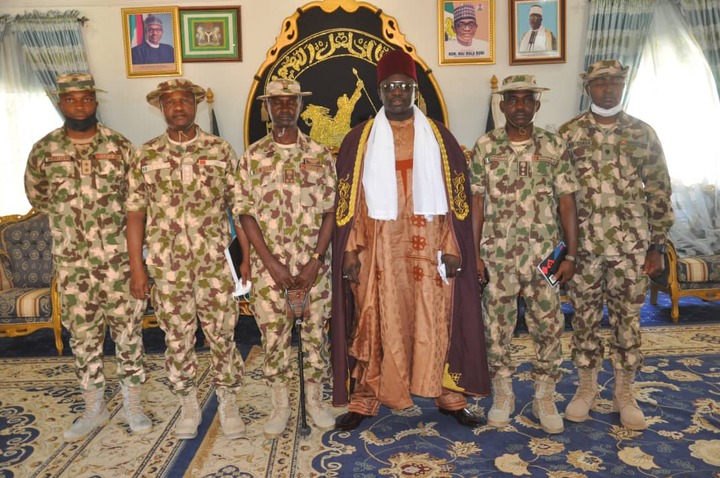 The Emir of Damaturu, His Royal Highness Alhaji Dr Shehu Hashimi II Ibn Umar El-Amin Kanemi has disclosed that the Yobe State Traditional Rulers Council are in total support of the ongoing military operations especially Operation Tura Takaibango that was launched by the Nigerian Army aimed at destroying all Boko Haram criminals/ Islamic States West Africa Province enclaves in the State. The Emir of Damaturu made this statement today 9 March 2021 while welcoming the new Commander Sector 2 Operation Lafiya Dole in his palace in Damaturu the Yobe State capital.

The Emir assured the Commander of the traditional institutions in the state continuous support, cooperation and partnership with the Army in the area of strategic information and continuous sensitization of the locals on issues of security consciousness and awareness. He also thank the Executive Governor of Yobe State His Excellency Hon Mai Mala Buni for his untiring support to the security agencies in the state. He congratulated the new Commander for his well deserved appointment and assured him that the traditional institutions will continue to organize prayers for the success of all military operations in the state.

In his remarks, the new Commander Sector 2 Operation Lafiya Dole Brig Gen Adamu Nura stated that he is on familiarization visit to the Emir of Damaturu and as well introduce himself as the new Sector Commander. He stated that he is delighted as the visit has provided an opportunity to meet His Royal Highness and

members of the state traditional council.

The Sector Commander further assured His Royal Highness that the Sector under his watch is determined to partner with all security agencies in the State to tackle the menace of Boko Haram insurgents who only believed in violence which is alien to Islam and humanity. This he promised to achieve which in line with the Chief of Army Staff Vision to have “a Nigerian Army that is Repositioned to Professionally Defeat all Adversaries in a joint Environment”.

Brig Gen Nura further disclosed that the Sector will ensure troops taking part in various operations in the State would be guided by the Professional Codes of Conduct, Rules of Engagement and the respect for human rights. He requested traditional rulers to remain vigilant and be security conscious, as suspected terrorists/criminals may be fleeing from military operations and finding safe haven amidst their communities. He further called on the traditional institutions to report any suspicious activity or movement to the nearest military formation or other security agencies for prompt action.

He later thank the Emir of Damaturu for his steadfastness and support towards ending insurgency and bringing lasting peace not only to Yobe State, but North East in general. The high points of the visit was exchange of plaques and group photographs.

Similarly, the Sector Commander also visited Special Army Super Camp 1 Ngamdu, Forward Operation Base in Potiskum and Kukareta where he addressed and charged troops to be at alert at all times and eschew any negative attitude capable of denting the good image of the Nigerian Army.

You are kindly requested to disseminate this information to the general public through your medium with attached photographs for awareness. Thank you for your usual cooperation.

I Regret Being Vain and Materialistic – Nwachukwu Ehioma