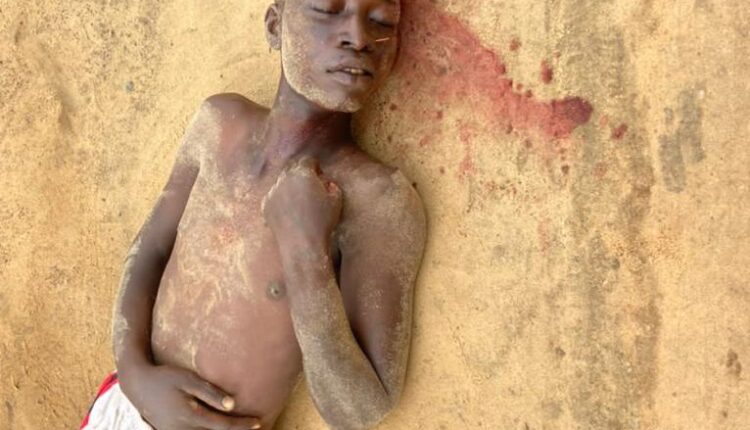 Activities on Lagos-Badagry expressway were said to have been paralysed for hours after two Fulani herdsmen allegedly stabbed to death a young man they mistaken for a bus conductor whose vehicle crushed to death one of their cows around MTN bus stop end of the road in the state.

Town Crier News Nigeria gathered that the Fulani herdsmen were grazing their cattle along the road and in search of better grass, two of the cows left the route to the expressway without minding vehicles plying the road and were crushed.

It was learnt that the cows ran into a commercial bus conveying over 15 passengers on Monday and all efforts by the driver to avoid crushing these animals proved abortive. 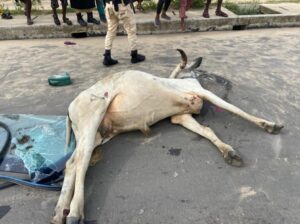 While one cow survived, though sustained injuries, the other was not lucky and was reported to have died immediately due to injuries sustained during the accident.

After discovering that the cow was dead, the driver and the bus conductor, according to an eyewitness,  ran away from the scene to avoid any confrontation with the herdsmen.

The Fulani men, in anger over the loss, attacked the deceased young man they had mistaken as the bus conductor, and before he could explain to them that he was not the one, they had allegedly stabbed him to death.

The eyewitness further narrated that this development resulted in a face-off between the residents and the herdsmen who tried to escape with their cattle but were apprehended by residents who handed them over to the policemen attached to Morogbo Division.

The unrest around the community was said to have forced vehicles plying the road to the Seme border and other communities along the road to either wait or turn back to pass other routes.

Confirming the incident, the Spokesperson for the Lagos Command, Benjamin Hundeyin, said that normalcy has returned and that the suspected killers have been arrested and were currently been interrogated.

Hundeyin added that after the completion of the ongoing investigations, reports would be made public

According to the statement: “A commercial vehicle ran into two cows this morning at Agemowo, Badagry, killing one of the cows. The two cattle herders attacked someone they mistook for the vehicle conductor, resulting in his death. Angry residents blocked the highway in protest of the killing. 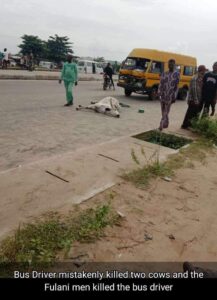 “ The DPO, Morogbo Division, assisted by soldiers from 243 Recce Battalion, Badagry successfully cleared the obstruction. Normalcy has since returned to the area. It is entirely false that the victim was turned back when he sought refuge in the police station. 2/3

“He did not make it off the accident scene, let alone reach the station. Meanwhile, the two herders have been arrested. Investigation is ongoing”.