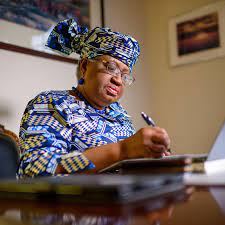 Ngozi Okonjo-Iweala, director-general of the World Trade Organisation (WTO), has commended the Swiss press council for calling out Aargauer Zeitung, a Swiss newspaper, over its headline describing her as “grandmother” after her election.

“This Grandmother will become the new boss of WTO,” the headline of a report by Luzerner Zeitung had read.

The Swiss media description led to condemnation and a heavy backlash, with many describing the reportage as an expression of racism and gender discrimination.

The media regulator, however, said it had not been able to determine whether discrimination on the basis of skin colour had played a role.

“However, it is obvious that if this had been about a male former finance and foreign minister in a country of 200 million people, the headline ‘a grandfather becomes the WTO director-general’ would be inconceivable,” it said.

“Therefore, the council deems the headline discriminatory on the basis of gender.”

Commenting in a tweet on Thursday, Iweala commended the media council, saying it is appropriate to call out sexism, racism.

For your Advert placement Town Crier News Nigeria is ready to serve you better.

“I welcome the ruling of the Swiss Press Council calling out the gender bias & sexism of Swiss newspaper Aargauer Zeitung for its headline ‘Grandmother becomes boss of WTO’ upon my appointment. It is right to call out sexism, racism or both when you see it!” she said.

Okonjo-Iweala is the first woman to head the WTO