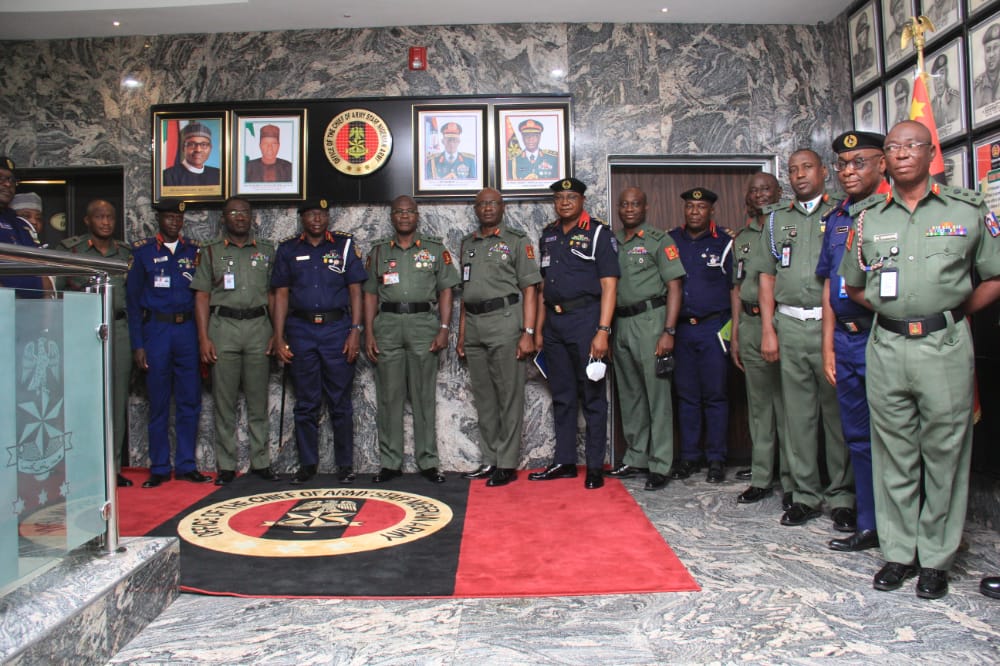 The Commandant General of the Nigeria Security and Civil Defence Corps, NSCDC, Dr Ahmed Abubakar Audi has paid a courtesy visit to the Chief of Army Staff, Lt. General Faruk Yahaya to solicit collaboration with the Nigerian Army (NA) in capacity development.

In a press statement e-signed and released to the National Association of Online Security News Publishers, NAOSNP by the Army’s Spokesperson, Brig Gen Onyema Nwachukwu stated that, “The Nigerian Security and Civil Defence Corps (NSCDC) has solicited collaboration with the Nigerian Army (NA) in capacity development. The Commandant General NSCDC, Dr Ahmed Audi made the appeal when he led senior officers of the Corps on a courtesy call on the Chief of Army Staff (COAS), Lieutenant General Faruk Yahaya in Abuja today, 1 February 2022.”

According to Nwachukwu, “In his remarks, Dr Audi acknowledged the cordial relationship existing between the NA and the NSCDC, adding that this will be improved upon. He further stated that such collaboration is inevitable given the current security challenges confronting the nation.”

“The Commandant General recalled that having benefitted from military trainings in the past, the window of training opportunity from the NA, if made available will ultimately enhance the Corps’ operational capacity. He expressed his appreciation to the NA for timely assistance in the training of female squad of the Corps with special capabilities. This he said has largely enhanced their capacity as they are currently deploying the acquired skills in safeguarding schools across the country.”

While responding, the COAS assured that the NA will continue to build on the existing collaboration with the NSCDC and other security agencies, particularly in the aspect of training and other areas of mutual interest.

The COAS commended the NSCDC for the exemplary commitment in the security of lives and property, particularly in safeguarding critical national infrastructure.

He urged them not to relent in their fight against economic saboteurs.