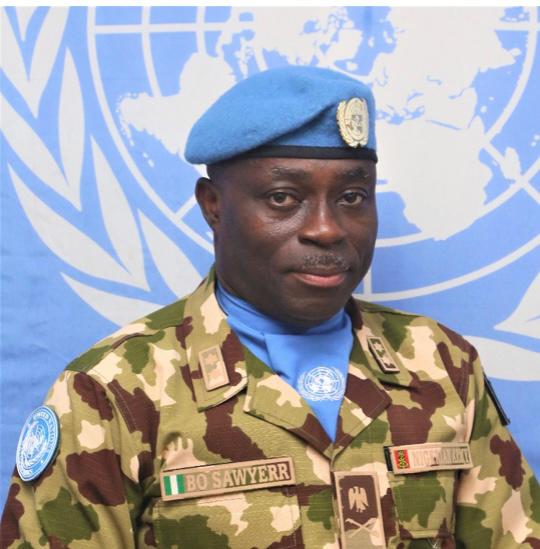 The Force Commander/Acting Head of Mission for the United Nations Interim Security Force for Abyei (UNISFA), Major General Benjamin Olufemi Sawyerr has officially taken over from Ethiopia’s Major General Kefyalew Amde Tessema who has served the mission for close to two years. Major General Sawyerr took over on 15 March and will lead the newly reconfigured multinational peacekeeping mission.

During the transfer of authority ceremony at the Missions Headquarters in Abyei, General Sawyer applauded the mandate implementation achievements of the Ethiopian peacekeepers under the leadership of the outgoing Force Commander and Ag Head of Mission, General Kafyalew Tessema especially in the areas of peace and security and, pledged to build on his legacy.

General Sawyerr lauded the Ethiopian troops for their immense contribution and sacrifice in pursuit of peace and security in the Abyei Area. Ethiopia has been the only troop contributing country since the establishment of UNISFA in 2011 and has played a critical role in the prevention of conflict and advancement of the political process towards a sustainable solution for Abyei.

The Force Commander paid tribute to peacekeepers who have lost their lives to the cause of peace in Abyei.Thanking the UN Secretary-General for appointing him as UNISFA Force Commander and acting Head of Mission General Sawyerr pledged to work closely with local and national authorities towards achieving the UNISFA mandate.

The outgoing Force Commander, General Kafyalew Amde Tessema thanked UNISFA peacekeepers for their selfless sacrifice towards the effective implementation of the mission’s mandate attributing the success of his tenure to the cooperation and understanding of these components.

Major General Sawyerr has a distinguished military career spanning more than 34 years of service with the Nigerian Army, including as the Director of Defence Information of Nigeria’s Defence Forces since 2021.

Previously, he served as Commandant of the Nigerian Army Armour School in Bauchi State in North East Nigeria (2020-2021).

He held the position of Brigade Commander twice in North East Nigeria and was Commanding Officer of the Nigerian Battalion with the United Nations Mission in Liberia (2009-2010). He also served as the Director of Plans at the Nigerian Army Headquarters (2019-2020) and Deputy Director of Doctrine and Combat Development (2017-2018).