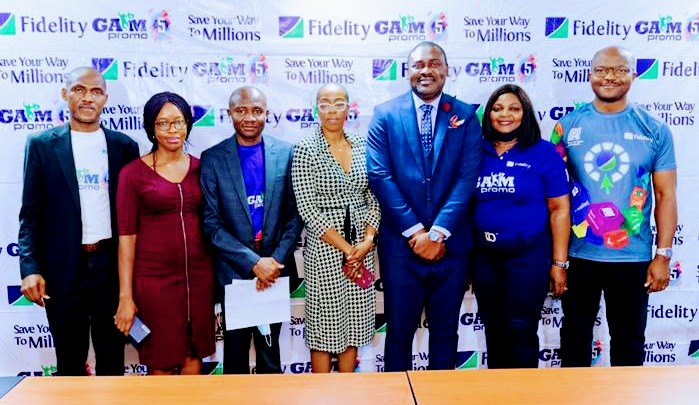 Leading financial institution, Fidelity Bank has reiterated its commitment to enriching the lives of its customers as it announced the third set of 10 millionaires in its Get Alert in Millions season 5 (GAIM 5) promo.

Giving the welcome remarks at the draw, Dr Ken Opara, Promo Chairman and Executive Director in charge of Fidelity Bank’s Lagos and South-West Directorate who was represented by Lanre Showunmi, the bank’s Chief Digital Officer, said, “We launched the GAIM 5 promo to reward our esteemed customers for imbibing a healthy savings habit and in demonstration of our commitment to improving their well-being. We have earmarked a total of N125million as cash prizes in weekly, monthly, and grand draws which would hold till July this year when the campaign would end. Till date, we have rewarded 670 customers with various sums of money including 650 customers that have won N10,000 each in the weekly consolation draws and 20 customers who have won N1million each in monthly draws respectively.”

Launched in November 2021, the GAIM 5 promo rewards Fidelity Bank customers for maintaining a savings account with the bank. According to the bank, every N2,000 in a customer’s account stands for a ticket in the draws with higher number of tickets increasing the customer’s opportunity to win a share of the N125million earmarked as prize money for the season.

Speaking on the Bank’s commitment to enriching and rewarding customers, Ukpai Ibe, Head, Savings and Sales, Fidelity Bank Plc, stated, “At Fidelity Bank, we continue to find different ways to reward our customers. Since we commenced the FPSS and SWEETA loyalty reward campaigns 7 years ago, we have given out over N4.1b as loyalty cash reward to 10,280 customers.”

Fidelity Bank is a full-fledged commercial bank operating in Nigeria, with about 6million customers who are serviced across its 250 business offices and digital banking channels. The bank is known for exceptional customer service and digital innovation.