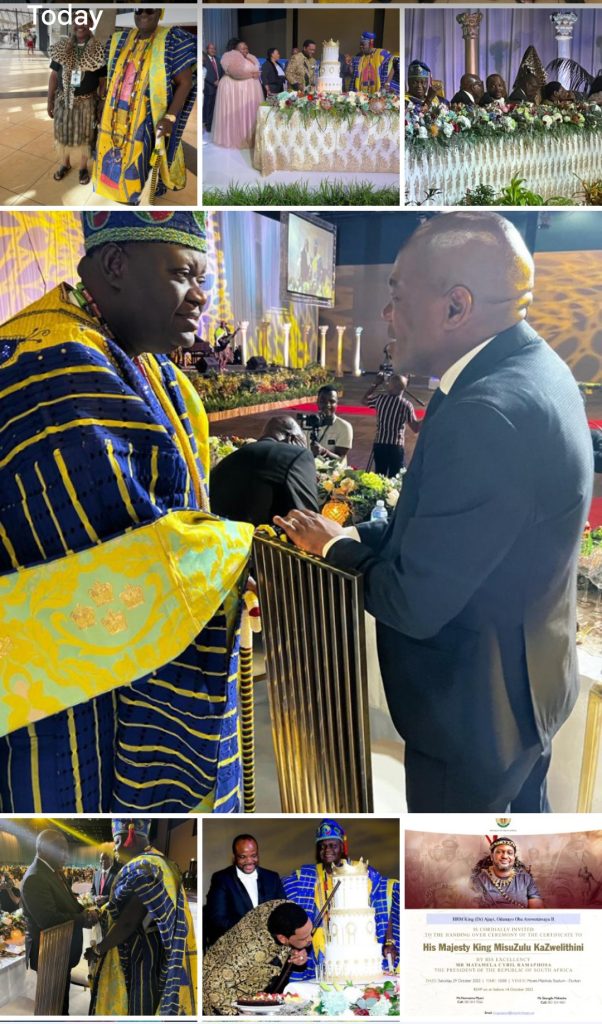 The members of the National Association of Yoruba Descendants of Southern Africa (NAYDSA) led by the National President, Aare Seyi Akinyele was also at the reception.

He was thereafter flew to Durban, KwaZulu-Natal(KZN) in the company of the members of the state security agency and attended the coronation of HRM King Misuzulu KaZwelithini on the 29 of October, 2022.

Kabiyesi from the occasion proceeded to the gala dinner which took place on the night of the king’s coronation where he met with dignitaries such as l President Cyril Ramaphosa, Former President Zuma, HRM Eswathi, the King of the Kingdom of Eswatini and a host of others, where experiences of leadership at different level of society and how to develop and propagate the African culture and tradition were discussed.

It’s pertinent to mention that the city of Durban, under the leadership and magnanimity of its executive Mayor, Thomas Mxolisi Kaunda hosted His Majesty to a dinner on the 1st of November, 2022 at uShaka Marine World, a world class entertainment theme park and tourism destination located on Durban’s Golden Mile.

His Majesty has continued to receive in large numbers, members of the Nigerian community in South Africa and well wishers from other African nations.

Lastly, His Majesty have played pivotal role in the re-establishment of the Structure of Nigerian Union South Africa (NUSA) Durban ward after he encouraged the community members to support the President of the Union, Hon. Mgbo to make sure that his administration is successful.

His Majesty also received in audience the President of the United Africa Business Association Mr Mosa Monaheng and discuss at length Vis a Vis the importance of synergy in intercontinental economic activities.

He thanked everyone who has contributed in making his stay in Durban, South Africa a peaceful one.

Insecurity: Allow Us Flush Bandits Out Of Bushes...