As the final knell tolls 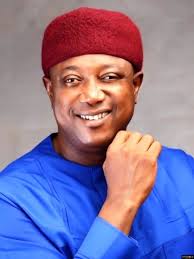 Nigeria’s political landscape has for a long while been dominated by Imo North Senatorial District (Okigwe Zone), no thanks to the perennial warfare over who represents the zone in the Red Chamber of the National Assembly.

Interestingly, from the throng of eminently qualified aspirants,Distinguished Senator Frank Ibezim trounced them all despite all manner of barbs and brambles strewn on his path.

Ordinarily, one would have expected the remaining lone opponent to Ibezim, Chief Emmanuel Okewulonu, to sheath his sword and embrace his brother like a good sportsman, at least, for the good of the beleaguered zone. But no, he would not do that.

Okewulonu does not even give credence to the Supreme Court judgement that confirmed Ibezim’s senatorial garb. To him, the supremacy of the apex court must be subjugated to the Election Petition Tribunal where he has gone to upturn the decision of Nigeria’s most superior court.

We must all concede to Okewulonu the right to pursue his case to any level but being a serial loser and enjoying it is the price to pay for being overly ambitious. So much money wasted, so much animosity stirred, so much goodwill sacrificed, so much energy and resources dumped into a futile venture. Who would tell our beloved chief or high chief that this kind of acrimony is not welcome in the family that Okigwe is.

The issue at play is his claim that Ibezim’s party, the All Progressives Congress, APC, had no candidate in the December 2020 by-election and so, he deserved to be senator, having scored the next highest number of votes. Why would he love to be senator through the back door when the front door is wide open?

His argument falls flat on its face since the Supreme Court has cleared the muddle created by the Independent National Electoral Commission, INEC, and ruled that indeed APC had a candidate, who is Frank Ibezim. The matter should have ended there but Okewulonu sought to pitch the tribunal against the Supreme Court and one really doubts if that is tenable or possible.

The whole trouble in Okigwe started with the untimely death of Senator Ben Uwajimogu, necessitating the quest to replace him. This became intensely acrimonious in the APC but eventually left two hot contenders in the persons of Senator Ifeanyi Ararume and Chief Frank Ibezim.

Both candidates were at each other’s jugular each parading conflicting court judgments, disqualifying each other and laying claim to the ticket so much so that when the by-election eventually held, INEC declared APC winner without naming the candidate that won.

Of course, Okewulonu, the PDP candidate saw in this a loophole to explore and began to claim the seat since, according to him, APC did not have any candidate.

That the Supreme Court eventually resolved the matter in April and confirmed Ibezim as authentic candidate of his party for the election, could not dissuade Okewulonu from a wild goose chase, as he clung to his fantasy like a Siamese twin.

Okewulonu decided to soldier on in self-defeat and desperation to get to the senate. He dismissed the ruling as an internal affair of the APC that had nothing to do with him. However, it is on this same internal matter that he hinged his stake to the seat. This double speak is not only baffling but also deservingly piteous.

In one breath, he saw the ruling as ‘a continuation of the recurring pattern of inconsistent and incomprehensible judicial decisions, which we have all been witnesses to in recent times, particularly in Imo State” and assured his supporters that “for the avoidance of doubt, however, I want to assure you that our own suit instituted at the Election Tribunal is still alive and well, and will proceed without any let or hindrance.”

Yet he trusts in this same continued ‘recurring pattern of inconsistent and incomprehensible judicial decisions inconsistent legal system’ to snatch what does not belong to him. Nonetheless, his quest at the election tribunal also went up in smoke. The Tribunal sitting in Owerri, did not only uphold the victory of Senator Frank Ibezim but also slammed Okewulonu with a hefty fine of half a million naira to each of the respondents.

Delivering judgment, the Tribunal dismissed Okewulonu’s petition, No. EPT/OW/SEN/3/2020, on the ground that contrary to the mandatory provisions of the Electoral Act, he failed to plead and prove scores and the name of the candidate declared and returned as the winner of the election in conformity.

According to a statement by Ibezim’s counsels: “The Tribunal held interalia that the petitioners have no locus standi to challenge the nomination, sponsorship of candidates of another political party, which is purely the internal and domestic affairs of APC.”

Moreover, the Tribunal held that the petitioners failed to discharge the evidential burden of proof because two of their witnesses gave a hearsay inadmissible evidence while the third witness denied his own claim and was accordingly expunged.

It also declined jurisdiction to entertain parts of the petition, which bordered on primary election and equally took judicial notice of the Supreme Court ruling that affirmed Ibezim as the authentic candidate of APC, adding that “the preliminary objection of APC and Distinguished Senator Frank Ibezim, therefore, succeeds and the PDP and its candidate, Emmanuel Okewulonu’s petition is hereby struck out.
“Tribunal further held that the petition lacks merit and hereby dismissed in its entirety and the cost of N500,000 awarded in favour of each of the respondents against the petitioners.”

Strangely, despite losing and attracting the hefty fine to himself, Okewulonu plods on like a careworn wayfarer, seeking where to collapse, leaving none to pity his loud fall into ignominy.

As the final knell tolls on Okewulonu’s misfiring ambition, discerning minds are worried by the chief’s love for failure. He has continued to fail in his bid to berth at the senate as if his life depends on it. It now seems he loves losing, making people to wonder if his political life could outlive this last impending self-evident defeat.

Fortunately for Okewulonu, we live in an overly forgetful clime without a sense of history, otherwise he wold have been mindful of the judgment of posterity and be more circumspect in the steps he takes.

How the Appeal Court would overrule the Supreme Court of the land, with its spiraling consequences, beats one’s imagination, except, perhaps, Okewulonu has done ‘something’ to fix the ‘inconsistent and incomprehensible’ acts he accused the judiciary of. It is doubtful though if the judiciary would succumb to this blackmail just to appease his hubris.

This katakata in Imo North would never have arisen but for the death in December 2019 of Senator Ben Uwajumogu. Since then, the zone had remained without representation until about three months ago when Ibezim came on board and has shown great signs that light shall yet shine in darkness.

Alas, the same opposition that could not stall his emergence through wicked schemes and concoctions are at it again intent on quenching the nascent light and decided on pulling Ibezim down, not minding that the actual victim is Okigwe. Indeed, what the Okewulonu group is engaged in right now is to distract Ibezim from the noble path he has already carved for himself for the good of the people.

Okigwe Zone has remained in the backwaters and the attempt by a privileged, selfish few to leave it in that mire of obscurity and decay must fail. That is why the hands of all patriotic Okigwe sons and daughters are joined in solidarity and prayer that the yoke of political toxin be be broken so that the zone can breathe and be like others sans the putrescent mess of self-anointed saviours, saving nobody.

As the final knell tolls