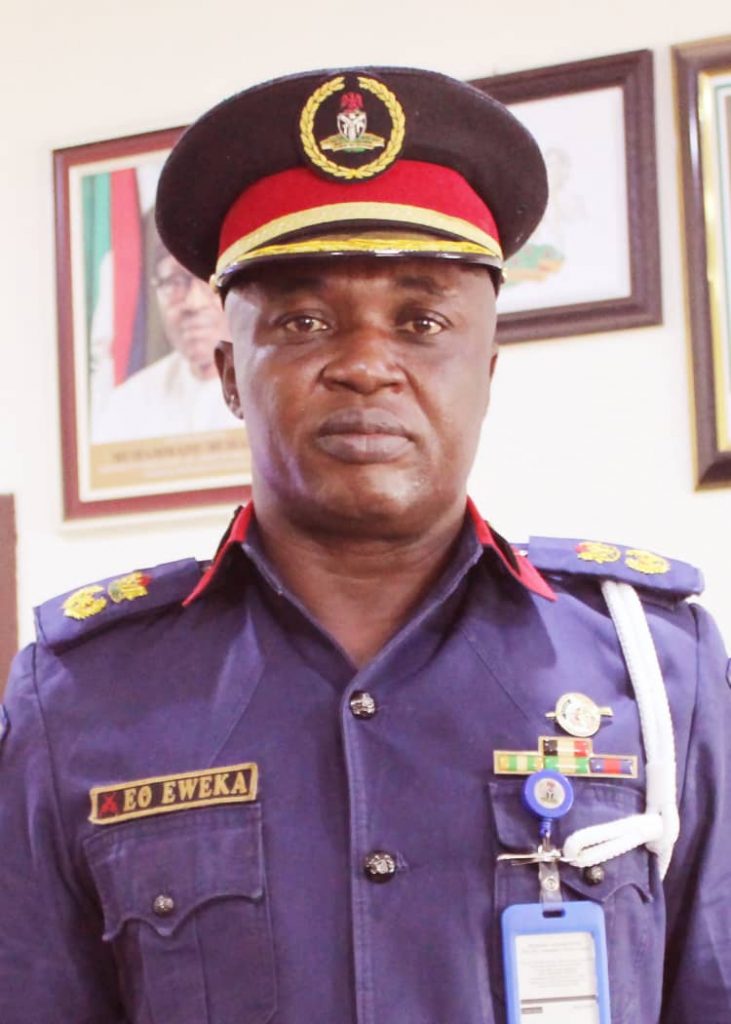 Operatives of the Nigeria Security Civil Defence Corps, Lagos State Command has arrested two suspected human traffickers and rescued two (2) victims, following a response to a distress call from a member of the public.

In a press statement e-signed and released to the National Association of Online Security News Publishers (NAOSNP) by the Command’s Spokesperson, ASCI Abolurin Oluwaseun Olumide stated that, “The vision of the Commandant of Corps (CC), Nigeria Security and Civil Defence Corps, Lagos State Command, Commandant Eweka Edenabu Douglas Okoro Msc ACMA CNA, to ensure the protection, security and safety of lives and property, in Lagos state has yet yielded another monumental result, as the personnel of the Corps attached to the Badagry Division, led by the Divisional Officer (DO), Badagry Division, Chief Superintendent of Corps (CSC) Akinyemi Rasheed Ayodeji, on Friday, 29th October, 2021, at about 14:30hrs arrested two (2) suspected human traffickers and rescued two (2) victims, following a speedy and timely response to a distress call from a person known as Mrs Olaitan a member of a Non Governmental Organization (NGO), unnamed, over the suspicious activities of the suspected human traffickers, mentioned above, around the Gbaji area of Badagry.”

“It is pertinent to state that the suspected human traffickers who later identified themselves as: 1.Believe Atete (M), age 30 and 2. Moses Medemaku (M), age 25, with their two victims: 1. Godspower Kessena (M), age 19 from Isoko, Delta state and 2. David Okporbome (M), age 25 from Isoko, Delta state, upon preliminary investigation, revealed that they had the initial plan to move their two victims from Gbaji to Seme and Ghana eventually, as their last point of call.”

However, as a matter of fact, the proactive personnel of the division led by the DO, CSC Akinyemi Ayodeji, intercepted the suspected human traffickers, from perpetrating their evil merchandise, at the point of embarking on their dastard, sacrilegious and inhumane act.

The NSCDC, Lagos Command, Badagry Division team, having also found two victims, with these suspects, immediately arrested them and rescued the victims from the hands of these men of the under world.

The two rescued victims however, upon having preliminary interrogation, with them having considered their level of volatility and putting them in the right psychological frame of mind, revealed that Mr Believe Atete, one of the suspects promised them gainful employments and a better life, in the Republic of Ghana, not until they got to Lagos, from Isoko, Delta state and discovered there was something crooked about the endeavor they had embarked upon, as a result of the strange conversations between the suspects and their allies on phone, which made them to know that there was fire on the mountain, before the able and gallant men of the Corps came to their rescue.

The Commandant, CC Eweka Okoro also seized this opportunity, to advise the members of the public to caution and restraint themselves from being deceived by fraudsters and human traffickers who hide under the guise of ‘creating employment opportunities,’ for their clients but have another inhumane and evil motive. He has also immediately, directed the Divisional Officer, Badagry Division, to transfer the suspects and the rescued victims to the Lagos State Command, Headquarters, Alausa, Ikeja, for further investigation to commence on the matter and promised to hand over to the appropriate government agency without delay.