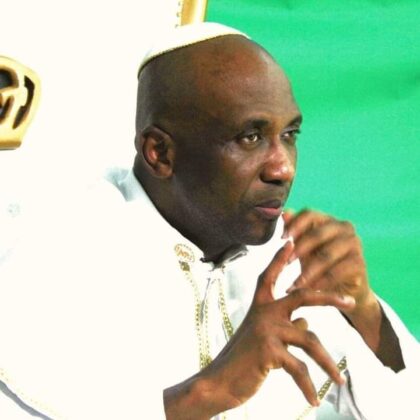 The second term ambition of Governor Babajide Sanwoolu has been sealed with an endorsement by the governor advisory council (GAC), a body that consists of the highest decision making personalities as far as Lagos APC is concerned.

Before the endorsement came, there were several gang-up against the second term ambition of the governor as we saw on the social media. In some publications, it was reported that leaders of the APC in Lagos are not in support for a second term ambition, most especially the muslim leaders in the state.

It was also reported that Governor Sanwoolu had an agreement with the leaders who brought him into power that he will only rule for four years in order to complete Governor Ambode’s second term which was cut short when he had issues with the leaders in the state.

It was definitely not a smooth ride for the governor before he got to the stage of endorsement by the GAC, he has faced some gang-up by those who are against him.

Considering the whole development, it is worthy of note that popular prophet, Primate Ayodele had prophesied how everything will turn out for the governor.

The first time he spoke about his second term ambition was in December 2020 when he said God has revealed to him that Governor Sanwoolu is the chosen one to take Lagos state to the next level. He stated then that the APC leaders should allow him have a second term for the betterment of Lagos state.

‘’ The Lord said to me that the Governor of Lagos State, Mr. Babajide Olusola Sanwo-Olu should be allowed to have a second term by the leadership of the APC.The Lord wants to do a new thing in Lagos and Governor Sanwo-Olu will be the one to be used.’’ (https://theeagleonline.com.ng/primate-ayodele-to-apc-why-you-must-not-deny-sanwo-olu-second-term-in-2023/)

Later in September 2021, Primate Ayodele spoke again and said the second term crisis of Governor Sanwoolu will begin. He warned him to forget about politics and immediately restrategize to have a second term.

“Sanwoolu second term crisis will begin, he should forget politics now and strategize, some forces are waiting to rain nemesis on him’’ (https://dailypost.ng/2021/09/06/2023-forces-against-your-second-term-restrategize-now-primate-ayodele-to-sanwo-olu/)

Again, in January 2022, Primate Ayodele revealed that the muslims will not take it easy with Governor Sanwoolu in 2023, noting that they will fight to ensure the ticket gets to a muslim.

‘’I see a crisis between the Muslims and Christians in 2023. The Muslims will not take it easy, they will fight and make sure they get the ticket in 2023,” (https://dailypost.ng/2022/01/21/2023-tinubu-will-disappoint-sanwo-olu-muslim-wont-take-it-easy-with-christians-primate-ayodele/)

As he prophesied, the argument on muslims getting the ticket has started already, it was reported on some news outlets, fulfilling Primate Ayodele’s prophecy.

The whole development had been foretold by Primate Ayodele months before they started playing out, confirming that indeed Primate Ayodele is a true man of God who sees ahead of time.