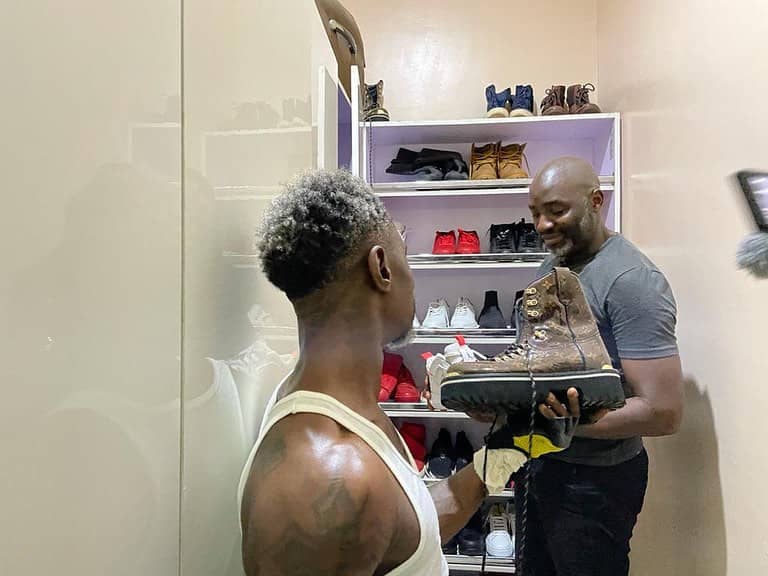 Gbolahan Peter Macjob is a renowned investigative journalist with the BBC, Radio/TV presenter, actor, entrepreneur, sport enthusiast, comedian and politician. Born on the 11th of January in the early 70’s and nicknamed “Ebora” growing up, Gbolahan is a passion driven individual who’s cravings for political power has beclouded his judgement and journalism.

Gbolahan a native of Abeokuta in Western Nigeria earned his first degree in Mass Communication at the Ogun State Polytechnic (now Moshood Abiola Polytechnic) before relocating to the United Kingdom to further his education.

According to close source, Dapsy was planning on relocating to the UK with his girlfriend before he was murdered at Iyana Safari area those who attended Moshood Abiola Polytechnic can relate with these areas surely. Gbolahan had ran to C-coy that night because he knew he was the next target. As at the time Dapsy was murdered, he was the Ibaka (name for the number 1 Eiye member in a Nest) and Gbolahan was his henchman known as the Ostrich who is primarily saddled with the responsiblity of protecting the Ibaka which is the reason he is still investigating his (Dapsy) death after 20years. They have other hierarchy such as Eagle, Woodpecker and even the Dove with various job descriptions.

*THE POLITICAL STRATEGY*
Recently, some sources have accused Gbolahan of involving in indiscriminate money making activities like rituals. My Lancashire source says “It is believed that Gbolahan used his son, Michael for money rituals”. Gbolahan’s first offspring is named Michael and lives with autism.
When asked what motivated him in helping people living with disabilities through his Afristar Foundation Team, He answered “I have a young son who has autism. Nevertheless, he is the happiest person in the world! The government of Great Britain is doing alot for disabled children, but I have noticed that most Nigerian families still hide children living with autism”.

The Afristar Foundation Team founded by Gbolahan receives grants, financial and technical supports on false pretence. In 2019, Gbolahan had diverted a grant he recieved in Lithuania to facilitate his political ambition. There are jaw dropping revelations about how Gbolahan and his political leader, mentor,  Segun Showunmi are trying to hijack the Ogun State Government.

Segun Showunmi is a staunch PDP stalwart in Abeokuta, he is a senior member of the Supreme Eiye Confraternity (SEC) and political godfather of Gbolahan. In 2019, Segun Showunmi contested for the Federal House of Representative (Abeokuta South Constituency) under the platform of the PDP while Gbolahan his protege contested for the same seat under the platform of YDP.
Gbolahan peddles drug to the UK for Showunmi and other PDP stalwarts. I don’t want to break this table so I will keep other names.

*THE UNEASY ALLIANCE*
After losing woefully at the 2019 General Elections, Gbolahan Peter Macjob, Segun Showunmi, Bolarinwa Omololu, Prince Drew Ade Bodunrin and other influential Supreme Eiye Confraternity (SEC) members held a meeting to identify the challenge and develop a mobilization strategy for 2023 in which Segun Showunmi will be vying for the Governorship seat of Ogun State. At this meeting, the uneasy alliance was formed. The resolution was to cripple the activities of their rivals (The Black Axe) ahead of the 2023 General Elections.

Consequently, in the 2nd week of December, 2021 a documentary anchored by Gbolahan Peter Macjob was premiered by BBC Africa and uploaded on YouTube. It was titled “Black Axe – Nigerians Mafia Cult Group”. In this documentary, Gbolahan had met with the biggest political thug in Edo State named “Tony Kabaka”. Kabaka has been a grassroot mobilizer for the Edo State government all his life. His unwaivering loyalty and support to the immediate past governor of the State (Adams Oshiomole) is the reason his property was destroyed. Kabaka is undoubtedly the most infuential youth in Edo State and a member of the Black Axe,reason he was the one chosen for the alliance.

In this documentary which associated the Black Axe and a Pan-African, non-profit, non-partisan organisation called Neo-Black Movement of Africa (NBM), Kabaka stated categorically that cultism still exist because government is involved. He threatened to mention the names of cultist in the Edo State government before he was called to order and off his microphone. Nigerians can relate with that…..Can’t we?

About 48 Hours after Kabaka had stopped singing, the Edo State government agreed to rebuild his destroyed property and stretched an olive branch. Kabaka accepted, apologized to the governor on social media platforms calling the governor his Uncle and on Sunday of that same week, he renounced his membership as a Black Axe member in a televised popular church service.

*THE HEATED CAMPAIGN*
Since our return to democracy in 1999, the heated campaign year has always been the even number year before the election year. 2002, 2006, 2010, 2014, 2018 and now 2022. These years are quite important to politicians but unknown to Nigerians as the catalyst year to effect the change that is craved. These even number years often reveal how the election year will be.

Segun Showunmi is running for the governorship seat in 2023 and rumour has it that he played a vital role in the assasination of Dipo Dina some years back. Gbolahan Peter Macjob will be re-running for a seat at the green chamber. Godwin Obaseki will be hoping to install his protege to succeed him after forming an uneasy alliance with grassroot mobilizer and community influencer, Tony Kabaka.

We are patiently anticipating to see how these events unfold.