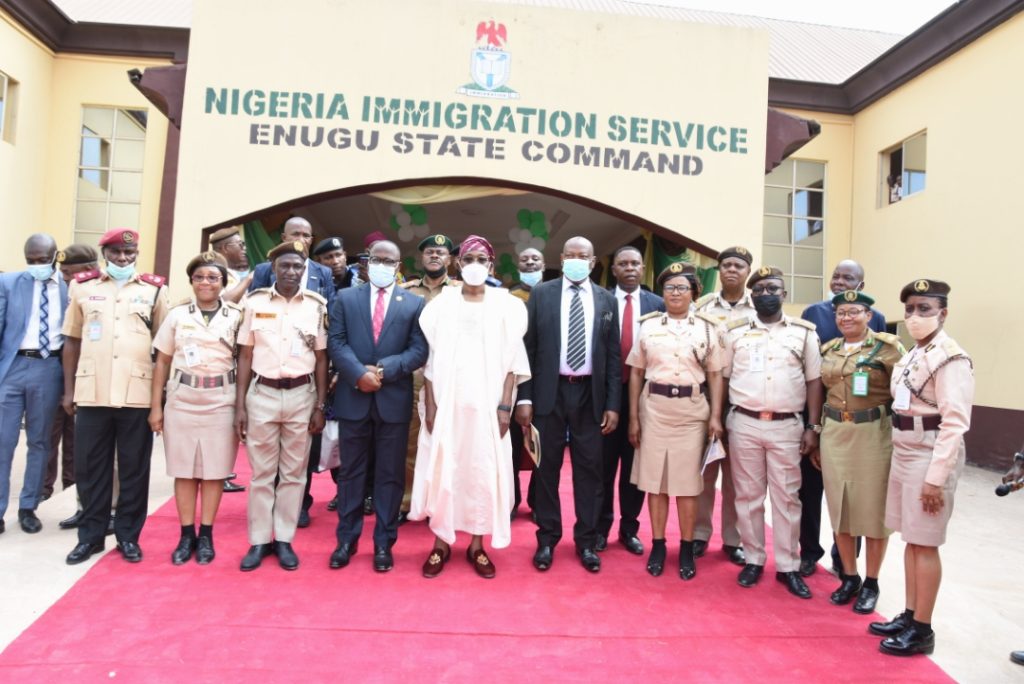 The Honorable Minister of Interior, Ogbeni Rauf Aregbesola has stated that applicants seeking to procure the Nigerian Passports do no longer need the services of anybody to do so henceforth. The Minister stated this on Thursday in Enugu while unveiling the enhanced electronic Passport facility for the South East region.

In a press statement e-signed and released to the National Association of Online Security News Publishers, NAOSNP by Sevice Public Relations Officer, Assistant Comptroller of Immigration, Amos Okpu stated that, “The Minister of Interior Ogbeni Rauf Aregbesola has said that applicants seeking to procure the Nigerian Passports do no longer need the services of anybody. The Minister stated this on Thursday in Enugu while unveiling the enhanced electronic Passport facility for the South East.”

According to Okpu, “He noted that with the seamless online option that the NIS has enabled prospective Passport applicants can now sit in the comfort of their homes and Offices and apply for any category of Passport. He stressed that “Passport applicants don’t need anybody again to get Passports; it is so easy to apply online and applicants will only be required to come to the selected Passport Office on the appointment date for enrolment”.

The Minister maintained that the main aim for the introduction of online application and payment option is to eliminate all forms of Passport racketeering, touting and clumsy processes. He enjoined Passport applicants to visit the NIS Passport portal via passport.immigration.gov.ng to apply, complete the form, pay online and get appointment date for enrolment without assistance from anybody stressing that many of such assistances tend to complicate the entire process. He advised applicants to ensure that they have their National Identity Number (NIN) and be ready to supply verifiable documents to enable easy processing of their applications.

Earlier, the acting Comptroller General of Immigration Isah Jere Idris had stated that the enhanced ePassport is the latest technology in Passport production. It comes in three categories of:
(i). 32-page, five –year validity;
(ii). 64-page, five-year validity and;
(iii). 64-page, ten-year validity.

The data page is polycarbonate and water-resistant. It has additional 25 security features over the ordinary electronic Passport.

He maintained that with the unveiling of the enhanced Passport and commissioning of the Production Centre in Enugu, all the five Passport Offices in the entire South East have been migrated to the enhanced Passport platform. He enjoined holders of the ordinary electronic Passport not to worry as the two documents are valid and running concurrently. He requested prospective applicants for the enhanced ePassport to avoid giving out cash payments or patronizing touts for assistance as the process is easy by simply visiting the Passport portal to apply and pay. He further enjoined members of the public to also utilize all available contact channels such as +2348021819988 and social media handles (Twitter&Facebook both @nigimmigration) to make enquiries or lay complaints.

Speaking earlier, the Governor of Enugu State, Rt. Hon Ifeanyi Ugwuanyi who was represented by the Secretary to the State Government Prof. Simeon Uchenna Otuanya thanked the Nigeria Immigration Service for its valuable contributions to the security architecture of the State. He lauded the introduction of the enhanced ePassport to the entire South East while assuring the Minister that the State would continue to support all agencies in the State.

It will be recalled that the enhanced ePassport facility for the South West was launched sometime in December last year in the ancient city of Ibadan. Plans are underway to extend the same facility to all the remaining geographical zones of the country.

A critical highlight of the event was the commissioning of the Passport Production Centre facility by the Minister of Interior ably assisted by the Secretary to the State government.