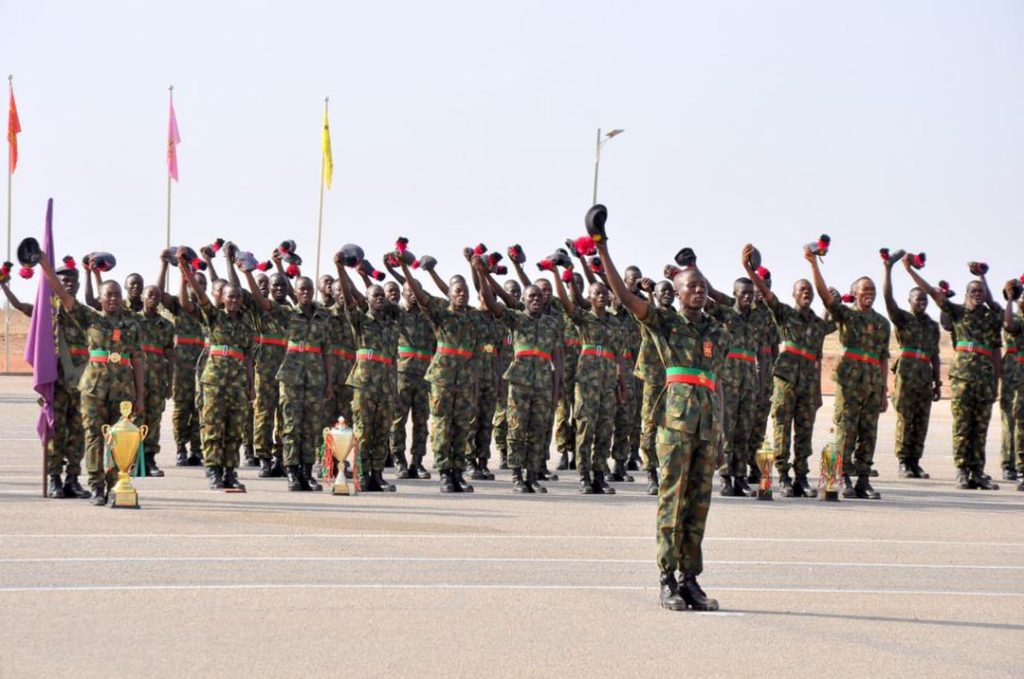 Major General Lawrence Pwanobato Ngubane (Rtd) has tasked cadets of Short Service Course 47 (Army) to remain focused, dedicated and committed to their duties and responsibilities upon their successful graduation from the Nigerian Defence Academy and subsequent commissioning into the officers’ cadre of the Nigerian Army.

Maj Gen Ngubane made this remark as the Special Guest of Honour at the Beating of The Retreat and Prize Giving Ceremony for cadets of SSC 47 (Army), held at the NDA Parade Ground, Afaka.

At the event which forms part of activities leading up to the proposed February 26 Passing Out Parade for the Short Service Cadets, General Ngubane urged the cadets to always keep in mind the security situation in the country and be reminded of their military and civic responsibilities, while also asking them to be good ambassadors of NDA, exhibiting a high level of discipline, loyalty, subordination to civil authority and the prioritisation of national interest above all.

While drawing notes from the day’s events, he reminded the cadets that there is always reward for hard work. He therefore charged them never to be complacent with their duties but to always put in the work if they desire to be successful in the military career.

Also speaking at the event, Commandant NDA, Major General Ibrahim Manu Yusuf, disclosed that training for SSC 47 (Army) commenced in April 2021. He added that after more than 10 months of rigorous training, 295 cadets of SSC 47 (Army), including 2 from the Republic of Liberia, are due to Pass Out from the Academy on February 26.

The commandant further disclosed that the training of the cadets, which was initially scheduled for 9 months was extended by another 2 months in order to equip the cadets with special skills required to deal with the hybrid of threats within the operational environment the cadets will be expected to enter into soon.

The Command extended the Academy’s gratitude to President Muhammadu Buhari, Defence Minister, Chief of Defence Staff and Chief of Army Staff for their unflinching support throughout the duration of the cadets’ training in NDA.

The Beating of Retreat and Prize Giving Ceremony for SSC 47 (Army) cadets marks the culmination of the cadets training in the Academy and draws the curtain on all training activities for the cadets. It also provides a platform to reward cadets who have distinguished themselves in military training activities and sporting activities throughout the duration of their training. It also awards deserving companies in Ashanti Battalion who have excelled in various competitions.

At the end of the ceremony, Tamando Company emerged Champion of Ashanti Battalion Inter-Coy competitions for Short Service Course 47 (Army). The Company emerged winner in 4 major military and sporting events to come up overall best. These events were Cross Country competition, Handball event, Exercise Camp Initial and Exercise Camp Highland. Tamando was followed closely by Colito Company in the 2nd position, while Kalapanzin Company emerged in the last position and was presented with the Wooden Spoon.

In the individual male category Cadet SO Odonfin of Kalapanzin Coy was awarded in Boxing, Cadet I Alpha of Colito Coy received the award for Wrestling, while Cadets B Ali and A Haruna, both of Tamando Coy, were awarded in the Cross Country event. Likewise, Cadet Coy Seargeant Major K Khamis of Kalapanzin Coy received the award for Obstacle Crossing.