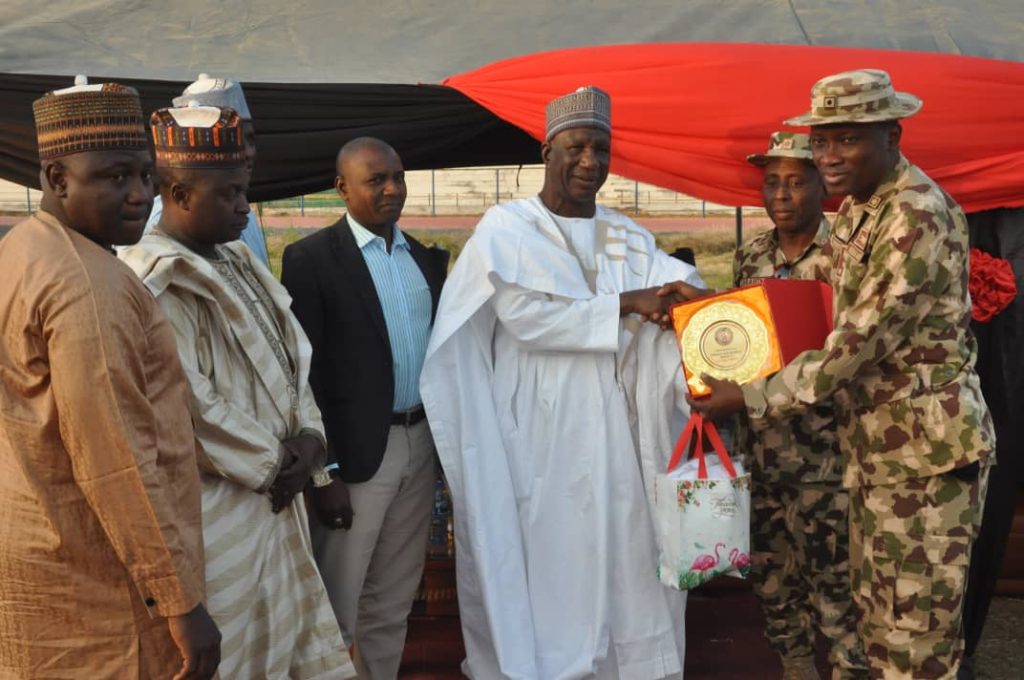 The Governor of Yobe State, His Excellency, Hon Mai Mala Buni, has expressed the appreciation of the good people of Yobe State for the immense sacrifices of troops of Sector 2 Joint Task Force North East Operation HADIN KAI to ensure lasting peace and stability in Yobe and other States in the North East region.

He stressed that his administration is determined to support security agencies to tackle the menace of Boko Haram insurgency in the north east of Nigeria. He noted that the efforts of troops in Operation HADIN KAI have provided enabling environment and support upon which Government activities thrives. Gov Buni who was represented by the Secretary to the State Government Alhaji Baba Mallam Wali further reiterated Government commitment to support Operation HADIN KAI with logistics within available resources.

Earlier, the Commander Sector 2 Joint Task Force North East Operation HADIN KAI, Brigadier General Adamu Nura, while welcoming the Special Guest of Honour and other invited dignitaries to the Sector 2 Nigerian Army Social Activities disclosed that the event is conducted annually and it’s one of the ways of keeping the customs and tradition of the Nigerian Army <a href=”https://metrotimes.ng”>alive</a>. He stated that the event is meant to strengthen social relationships among officers, soldiers and their families as well as their friends through cultural displays, musical <a href=”https://metrotimesng.com/2022/01/how-youths-stone-burnt-president-buhari-el-rufai-billboard-in-kaduna/”>performances</a>, comedies and other regimental activities.

The Sector 2 Commander who was represented by the Chief of Staff, Brigadier General Isang Akpaumontia, stressed that the event is usually organised to mark end of tedious and eventful training and operational year adding that it heralds the beginning of new training and operational year. He further disclosed that the event was conceived to create an atmosphere where officers and men would meet together outside the trenches of ongoing operations to unwind. The event according to him is also aimed at appreciating the successes achieved throughout the year 2021 within Sector 2 Area of Responsibility.

In his vote of thanks, the Chairman Organizing Committee, Lt Col RO Kolawole thanked the Yobe State Governor for finding time out of his tight schedule to attend the event and the Commander Sector 2 OPHK for his support and direction which has led to the successful hosting of the event. He also appreciated the traditional rulers, invited dignitaries and the good people of Yobe State for their steadfastness and support towards ending the insurgency.

The high of points the event were Cultural Troupes display, Inspection of Stands/foods, Tug of War, Group Photograph, Beating of Retreat and Lighting of Bonfire.

You are please requested to disseminate this information to the general public. Thanks for your support and cooperation.