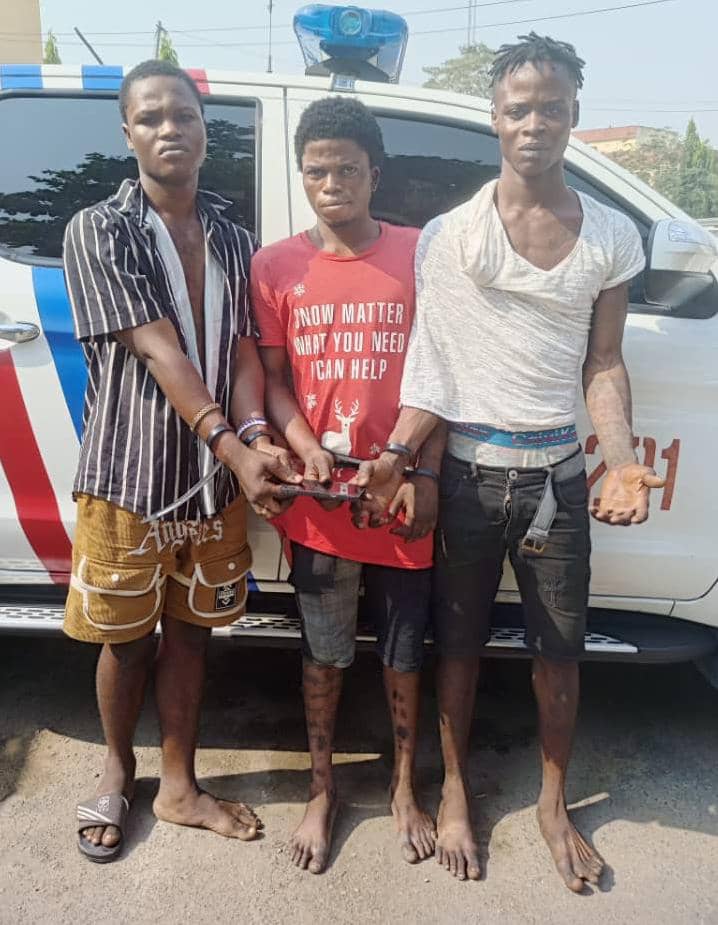 Written By Ibrahim A. Jagaba

The Lagos State Rapid Response Squad (RRS ), yesterday arrested three leading members of the swarm robbery gangs that have in recent times overtaken some strategic points in the Agege metropolis.

The commander of the agency CSP Saheed Olayinka Egbeyemi, had in response to a distress call yesterday night, ordered the agency’s decoy team who were on routine anti crime surveillance operations around Agege and environ to immediately arrest the situation, thus, the undercover operatives arrived the scene of the incident, around Isheri/Berger garage by Pen Cinema, in no time and succeeded in apprehending three notorious leaders of the gangs as they attempted escaping the scene.

The arrested suspects namely, Ridwan Imran (20), Lukman Abiodun (18) and Abdulahi Isa (18), had accosted the pedestrian namely , Yusuf Ahmed, harassed and ordered him to surrender the cash and valuables on him to them; his gutsy refusal infuriated them and prompted one of them (Lukman Abiodun), to smash a bottle on the victim’s head and thereafter descended on him, dispossessing him of his three phones and hundred thousand naira cash sum.

Preliminary investigation as confirmed, has led to the recovery of one of the very expensive smart phones from the arrested gang leaders, who led the investigating team to their loot pouch somewhere around the scene of the crime; estimated value of the valuables taken from the victim, who suffered deep cut from the bottle injury is put at over six hundred thousand naira (N600,000.00)

The commander of the agency has in line with extant directives, ordered the suspects to be charged to court for the law to visit it full weight on them; he has however, assured residents of Agege of sustained surveillance patrols as a way to make the area crime free and unhabitable for criminal elements going forward.