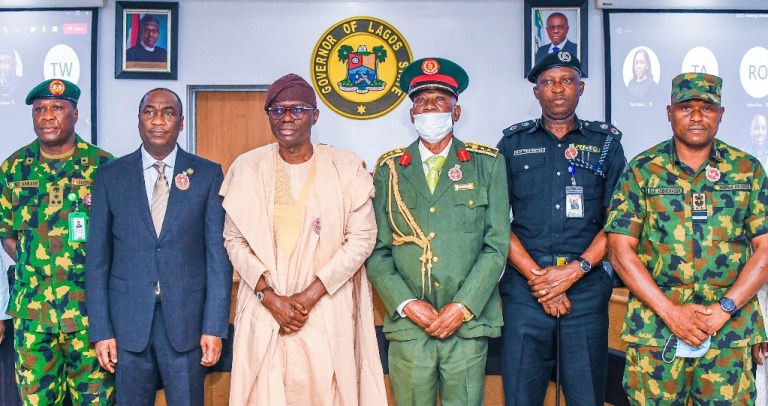 Lagos State Governor, Mr Babajide Sanwo-Olu, on Friday urged Nigerians to stop criticising the country but contribute their quota to build the nation.

Sanwo-Olu gave the advice during a dedicated Jumat Service for the year 2022 Armed Forces Remembrance Day Celebration, at the Community Central Mosque, Ikeja, organised by the Lagos State Ministry of Home Affairs.

It also honours veterans of the World War I and II as well as the Nigerian Civil War.

The governor, who was represented by his Deputy, Dr Obafemi Hamzat, said that Nigerians had formed the habit of criticising the nation, and even the Armed Forces, but also contributed to wrongdoings.

”All we do is criticise. We even criticise the Nigerian Army, that they are not fighting well. We always elevate the bad things about our country,” he said.

According to him, other countries have their challenges, but never portrayed such to the world.

Sanwo-Olu said that God had given everyone his uniqueness, hence, such uniqueness should be used to build the country.

”How do we justify the death of those people that fought for this country to remain? In memory of the people that have even died, let us even be nice to our country.

”Whether we like it or not, if we do not build it, all of us will suffer. It is as simple as that.

”We should do everything to prevent war. Some people have voluntarily said they will protect all of us with the help of Allah to defend this country. Therefore, we must appreciate them.

”We pray that Almighty Allah will be with the souls of those that have departed. For those that are living, it is our responsibility to do everything that we should to appreciate their efforts,” he said.

In his goodwill message, the Head of Service, Mr Hakeem Muri-Okunola, advised Nigerians to go beyond praying for the Armed Forces but do what was necessary by supporting the families of the fallen heroes.

Muri-Okunola commended the Nigeria Armed Forces for the efforts put in place to protect the people and the nation’s integrity.

He prayed Almighty Allah continue to fortify and strengthen them and their families.

Speaking on behalf of the Armed Forces, Maj. Ibrahim Harrison, prayed God to protect and grant peace to the country.

Earlier in his message, the Imam, Alhaji Abdulhakeem Kosoko, said Nigerians should continue to pray for the Armed Forces as they strive to keep the peace of the nation.

Kosoko said the people should justify the efforts of the fallen heroes by supporting their widows and children at all times.

He prayed that God would continue to protect them, their families and the nation.

The Commissioner for Home Affairs, Anofiu Elegushi, commended the Armed Forces for keeping the peace and protecting the nation.

Elegushi urged the people to continually show support for the widows around them especially the families of the fallen heroes.

“The governor has also ordered an empowerment training by the Ministry of Women Affairs and Poverty Alleviation for the widows of the fallen heroes.

“At the end of the training, the widows will be adequately compensated so that they can start a business of their own,” he said.