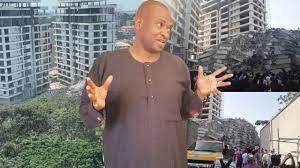 Femi Osibona, the owner of the collapsed 21-storey Ikoyi building is dead.

Osibona’s body was discovered among others during the rescue process at the site of the building on Thursday.

Earlier, the dead body of Mr Osibona’s PA (Personal Assistant), Nifemi, was recovered from the rubble.

Not less than 36 people have so far been confirmed dead since the building collapsed.

Rescue efforts are still ongoing at the scene of the incident with families and friends of those trapped in the building accusing government officials and rescue workers of being ineffective.