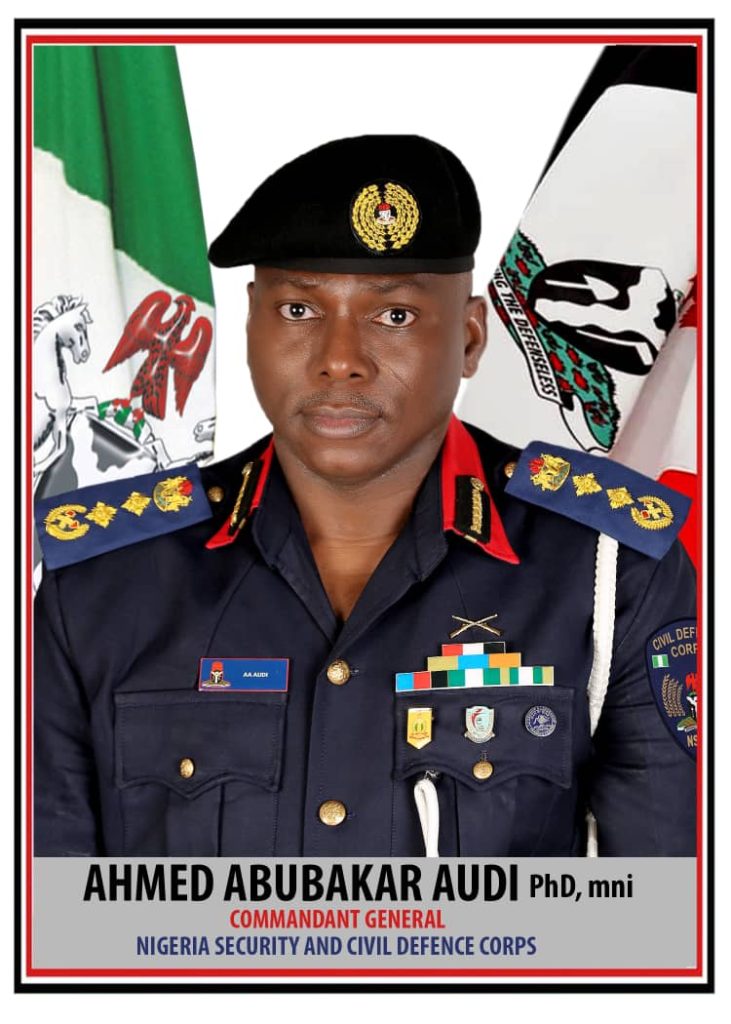 The Commandant General of the Nigeria Security and Civil Defence Corps, Ahmed Abubakar Audi has strongly condemns the recent assault on members of the Joint Task Force operation comprising of Nigeria Police, Civil Defence Corps and Vigilante group where one police personnel and two members of NSCDC lost their lives.

In a press statement e-signed and released to the National Association of Online Security News Publishers (NAOSNP) by the director of public relations of the corps, DCC Olusola Odumosu stated that, “The Commandant General, Nigeria Security and Civil Defence Corps, Ahmed Abubakar Audi, mni, strongly condemns the Thursday 28th October deadly attack on security operatives, innocent citizens and critical national assets and infrastructures and called for new approaches, greater commitments and more affirmative actions against all criminal elements threatening the internal peace and security of Nigeria.”

He described as unfortunate, the recent assault on members of the Joint Task Force operation comprising of Nigeria Police, Civil Defence Corps and Vigilante group where one (1) police personnel and two (2) members of NSCDC paid the supreme price in their brave struggle against terrorism, banditry and kidnapping.

According to the Corps helmsman, the brazen attack which happened in Shinkafi, along Kaura Namoda road, Zamfara State while the operatives were on deployment to checkmate the rising wave of banditry, kidnapping and other heinous crimes in the state is not only condemnable but callous, despicable and inhuman.

He commiserated with the families and friends of those who had lost their loved ones in the “heinous crime” and promised to fish out the criminals and make them face justice. He praised the efforts and resilience of the gallant operatives for preventing greater loss of lives and destruction of public property, assuring that efforts would be fully mobilized to go after the bandits, apprehend and deal decisively with them under the full weight of the law.

Dr Audi appealed to members of the public to be vigilant, security conscious and to promptly assist security agencies with credible information that could lead to the arrest of these criminals who perpetrated this despicable act before they cause more havoc in the society.

He vows that the Corps will not relent in it’s efforts but will continue it’s dogged fight against banditry, kidnapping and insurgency through concerted efforts of well trained personnel, introduction of more training programs and innovative strategies towards the deployment of more sophisticated equipment and improved staff welfare which provides an umbrella of life insurance coverage for all personnel of the Corps.

“NSCDC is a full fledged paramilitary agency of government determined to collaborate with other security agencies in keeping the country safe and preserving the way of life of Nigerians, we are therefore not deterred by these recent attacks but we are forging ahead to make life meaningful for all Nigerians, the CG said.