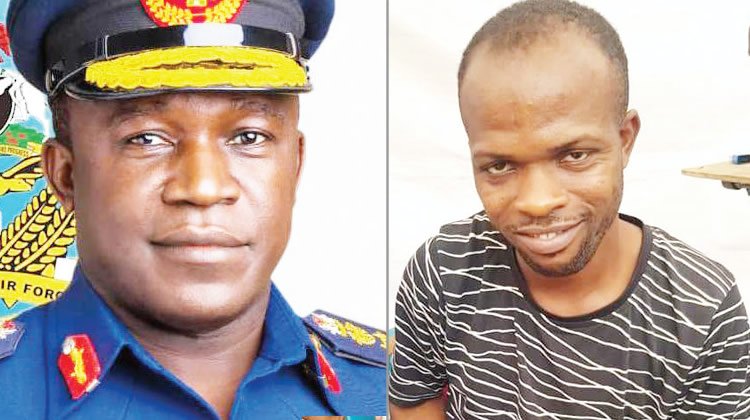 The family of an artist, Ifeanyi Kalu, has been thrown into mourning after personnel of the Nigerian Air Force, accused of driving on the Bus Rehabilitation Transport lane in Lagos State, crushed him to death.

Town Crier News Nigeria gathered that Ifeanyi was on his way to work in the Ilupeju area of the state when the incident occurred.

His remains were said to have been deposited in a mortuary at the Nigerian Air Force base in Lagos.

Describing Ifeanyi’s death as a big loss to his family, an actor, Segun Adefila, said he was killed two months after his mother’s death.

He noted that the 31-year-old left behind six siblings and an aged father.

In a post on his Facebok page, Adefila wrote, “Ifeanyi was a young Nigerian artist who was diminutive in stature but gigantic in strides. His life was one huge struggle for survival without a thought for crime but through a dint of hard work.

“On October 20, 2021, Ifeanyi’s life was cut short on the expressway of Ikorodu Road. He lived with his aged father and six siblings and left them at home on that fateful day for a job he just secured.

“He was on his way to a school (Temple Schools, Ilupeju) where he was helping to teach pupils cultural dance and music. A Nigerian Air Force vehicle travelling on a BRT lane knocked him down. Ifeanyi’s body is still in the Nigerian Air Force base mortuary.

“Ifeanyi’s mum is also still in another mortuary.

His bereaved family who are definitely inconsolable at the moment also stands the risk of not getting any form of tangible compensation from those whose vehicle knocked him down.”

Adefila clarified that the deceased was hit between the Obanikoro and Anthony ends of the Ikorodu Road.

While insisting that the Air Force was responsible for the accident, he said some companies in the vicinity could confirm his claim with their CCTV footage.

“According to them, he (Ifeanyi) had got to the BRT lane when they (NAF vehicle) hit him.

He fell on the expressway and a commercial bus just finished the job they started.

What kept everybody quiet was that they acted immediately by picking him up,” he added.

Adefila said the military later offered the family a compensation of N200,000.

“But why would they agree to take him to their place or even agree to pay anything if they did not hit him?” he queried.

A spokesperson for the Nigerian Air Force, Edward Gabkwat, refuted Adefila’s claim that the military vehicle crushed the victim, saying the 31-year-old was knocked down by a commercial bus.

He said, “An Air Force vehicle did not kill or crush the victim.

From what I learnt, the victim was trying to cross the road and an Air Force vehicle that was approaching saw him, and the vehicle suddenly stopped.

“The victim, who was apparently in shock at how the vehicle stopped, tried to go back to where he was coming from and I understood that a Danfo vehicle crushed him.

As an organisation with responsible personnel, the officers, who were in that vehicle, felt it would be out of place to see such an incident and a victim in that particular state and ignore.

“So, they decided on their own that they needed to assist and convey him to an Air Force hospital and that was how the victim ended up in our own hospital.

Unfortunately, it was in that process that he gave up.

“When the victim passed on, the family asked the Air Force for assistance to bury him and I understood that they (family) came up with a sum of N500,000.

The Air Force leadership in the base volunteered to contribute more than half of what they asked.”

He insisted that the Air Force personnel did not ply the BRT corridor or break any law.

Ifeanyi’s brother, Ikechukwu, denied that the family sought the assistance of the military.

He said, “They were the ones that first hit him and the impact of hitting my brother pushed him on the expressway where the bus finally killed him. Even the person speaking to us on behalf of the Air Force said their vehicle brushed him on the BRT lane.

“They first rushed him to a nearby hospital where he was rejected before they took him to the military hospital where he gave up his ghost on that same day. We are not seeking assistance; I have the message they sent us asking for a meeting and to know what we want them to do for us.”

The Head, Corporate Communications, Primero Transport Services Limited, operator of the BRT, Mutiu Yekeen, while commiserating with the victim’s family, described the incident as regrettable.

He said, “In our own operation, we always inform our busmen to be very careful when driving on the BRT corridor, let alone people that are not supposed to use the lane. Anybody that is not permitted by LAMATA to use the corridor is passing there illegally.”

A spokesperson for the Lagos Metropolitan Area Transport Authority, Kolawole Ojelabi, said the agency had made efforts to stop illegal use of the BRT lane.

He said, “We have done a lot of advocacy and have even visited the Air Force base in Ikeja to tell them of the need to help us appeal to military personnel, particularly air force personnel not to use the BRT lane. The BRT lane is reserved for BRT buses and not for any other vehicle.”

The state Police Public Relations Officer, CSP Adekunle Ajisebutu, had yet to respond to calls made to his phone as of the time this report was filed.

*WE MUST ENSURE THE INTEGRITY OF THE RECRUITMENT EXERCISE’ – PSC, deploys staff for Constable Exam nationwide*