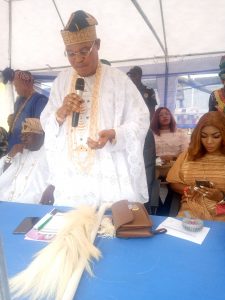 Oba Oladele Friday Kosoko recently marked his 69 years birthday. The colorful event started at about 10am in his palace at Iworo kingdom, a suburb of Badagry Local Government Area, Lagos State, Southwest Nigeria.

Many dignitaries, such as Baales, chiefs, Islamic clerics and well-wishers graced the occasion.

The celebarant had on April 12, 2021, marked his four years on the throne.

Mrs. Faidat Mohammed described Oba of Oniworo as “a good and kind person we have ever thought to have in Iworo Kingdom.” The Oba was also described as a nobleman.

According to the Oba of Iworo: “Today, being my celebration day, I invited the Islamic clerics and the representatives of the Christian Association of Nigeria (CAN); they all came to pray for me. I went out but before I returned, I was surprised to see the crowd gathered for the birthday celebration. My thought was just to mark the day with few people to praise God because there are more occasions coming.

“Next year, I will still invite you for my fifth year on the throne. So, I didn’t want to bother anybody at all but today that the Lord that created heaven and earth, I said I have to do this prayer. I thank everybody, especially those I see in my palace on a daily basis.

“I thank God for his infinite mercy over us. I also thank Onimeke of Meke Kigdom. Despite that I said I didn’t want to invite any king, Onimeke was passionate that to witness the occassion because when we are inviting Iworo, you must invite Imeke and when you invite Imeke, you must invite Iworo.

“The advice I want to give you on what is happening is that if you look at our street lights, they are no longer functioning for almost two months. Our purpose as a community leader is to get us informed when found wanting.

The installation of the street light cost the State Government millions. Apart from the traffic light, how many places do we have the traffic light in this community? We are not benefiting; we are at the extreme but they are on the street. Please, don’t hesitate to get us informed because if the street light is not functioning, there is no way I will know. Please, always get us informed.

For Advert Placement Town Crier News Nigeria is there to serve you better.

“Government properties are your properties. Aradagun road will be constructed; the State government has made provision for that; the same thing will happen in Imeke, also in Ilado, but the one we have in our community, please let us join hands to help the LAWMA people. Some will just deliberately dump their refuse on the roadside, which is not proper. I have gone to meet the police in our community. If you are not capable, I will turn myself in to the police and I will work. These are the things giving me concerns. To go on what the government had done for us in our community.

“Look at our road; Oba Oyediran Street has been abandoned. We were thinking there would be no solution to it anymore but as God would have it, go and see it today; work is completed. I can assure you that in the next three months the construction of the road will be completed. So, the State government has been of assistance to this community.

“There is nothing we asked from the State government they will not do. It is not left to us. I’m using this opportunity to pass across the message; we must not turn all those areas to dumpsite. Anyone I arrest will work for two weeks; I will buy a broom and gown for anybody that is caught; that will serve as a deterrent to others.

“We have all seen all that you like and I have said earlier that I would always thank the Almighty God. There was no labour room at our Primary Health Centre; they have the capacity of what they could carry from the primary health centre. However, after the confrontation, I instructed them to start molding 1,000 blocks for the construction of the labor room. Reason is that I was in Abuja when I received a call that someone had given birth to twins, but there was no provision for the set of twins. I said to myself, that we can no longer wait for the State government though I have given enough advice, mainly on that Primary Health Centre, which the government is putting into consideration. They are molding the blocks in commemoration of my birthday on September 20, 2021. I assure you that as time goes on; we will have three rooms there, as our labour rooms.

“Our police station is giving us a lot of benefits that we know nothing about. I can remember some years back that I said with this police station that they built here, are they going to be arresting us? I said to myself that well, it is only the offender that will face the music. When you sit down quietly, and you are not a trouble maker, nobody will touch you. So, now we have applied for grading. Though they gave us little conditions, I’m assuring you that in the next three months we must have, at least, 50 fully armed policemen. All those messages coming out from the clerics majored in security. There is nothing you could do when you are not secure. I thank God we sleep with our two eyes closed but in some other areas, they cannot sleep with their two eyes closed. We are not mocking them but God has been so wonderful with us, particularly within the Southwest. The miscreant or bandits are trying to penetrate but with God on our side, they will all be captured. Please, I want you to know that prayers are working. We should also try on our own; let’s inculcate discipline. As we are calling on the government they are responding.”

To Prince Aremo Oluwatosin Emmanuel Kosoko, said, “We are very grateful to God for the occasion of the oba’s 69th birthday. You know, if you can remember a couple of his friends and contemporaries are no longer alive. We don’t celebrate their loss but we were just grateful to God. His journey of manifestation and we are just excited that God had preserved him for this purpose; so it is a big celebration.

“As he is celebrating, he is still trying to prepare development for the kingdom because I hear him saying that they have commissioned 1,000 blocks. He is a man of the people and someone who had been very passionate about the development of Iworo Kingdom. So, while celebrating, he is still thinking of what we can do for Iworo. So, it is a very big celebration. I think he had actually been a leader from a very young age, because he joined the Nigeria Army at a very young age where he played a very considerable role. Later he went into business. He had always wanted to lead. He contested at the federal constituency level and in different elective positions and he even became a House of Representative member in 1993.

“I think leadership for him is something he had grown up with. Thank God now; he is an Oba to this Iworo Kingdom. So, leadership is always there. I’m not surprised what he has achieved within the last four years. So, he is a man of the people genuinely. He just has to show the kind of man he is; leadership is about followership. A leader without followership is not a leader, I think his personality should be able to accept anyone poor, rich, old one, male, female. He had just told you the kind of person he is; he wants to learn from people he wants to absorb.

“As his son, the head to the throne, I wish him God’s direction, good health and wisdom. You know leading a family is a difficult role; now think about leading a community. So, I’m praying that God will bless him with wisdom and I wish him all the best. I know that with all the vision you can understand what we have here. Within four years, we will have a police station, a southwest pole, tarred road and solar energy coming very soon. You can see that these are strategic infrastructure that will attract investors to Iworo. The town will be one of the most investable towns in this entire Badagry.

“Though it could be difficult but with the right set of infrastructure this would happen. I think it is time for us to support his vision and also support what he is doing. There are lots of memories we share together. I think one of the memories is when we went hunting. He told me to get into the car, let’s go to Iworo; that time we were in Okokomaiko. He carried a gun in his booth and I wondered; does this man want to go and kill me? But the truth is that we were going hunting though he didn’t tell me what we were going for and I said to myself that my father couldn’t kill me nah and got into the car. When we drove down to Iworo, he told me where we were going, because he saw in my face the way I was very frightened.

“We have shared a lot of memories together; we have traveled together to different countries. So, we have a good relationship and I have learnt so much from him.

“Few of his challenges are when we were robbed, because I can remember one time when we were attacked, and he was shot on his leg and it was a very challenging time for him, healthwise, mentally, physically; that was a very painful day where they killed some of our pets.

It was a big challenge because he couldn’t recover from that emotionally, mentally, and he was out of engagement for over a year. I’m happy that he bounced back and since then God has been faithful.” 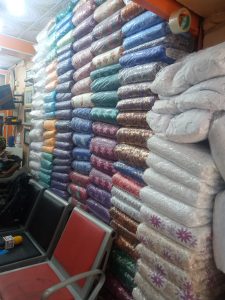 SICADE NIG ENT LTD,best place to pick up the best Fabrics for your occasions.