Fayemi calls for cooperation with firefighters to improve response time 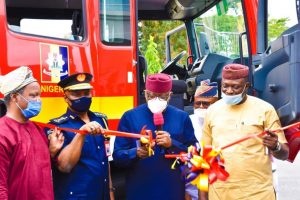 Gov. Kayode Fayemi of Ekiti has persuaded citizens to cooperate with the State and Federal Fire Services to improve response time to fire incidents.
Fayemi made the call during the commissioning of a state-of-art firefighting truck in Ado Ekiti on Thursday.
The governor said that the provision of the truck by Federal Fire Service (FFS) Controller General , Ibrahim Liman, for the operations of Ekiti was highly commendable.
He stated that there was need to support the federal fire service in its quest to improve the fire safety situation in the country.
“I see firefighting as one of the most essential services to render. This is a critical profession where we also have to make sure the remuneration is at par with what is obtained in other well sort after jobs,” he said.
He tasked Ekiti Office of Transformation, Strategy and Delivery to work closely with the state firemen to understand their challenges and recommend preliminary operational improvement.
“I have also instructed the supervising ministry; the ministry of infrastructure and public utilities to develop framework and guidelines that will enhance the effectiveness and efficiency of the state fire service.
“There is also the need for collaboration between the service and the emergency call centres,” he said.
He stated that the rate of fire outbreak in the state had declined from 2019 till date.
He attributed the success to the combined efforts of the relevant organisations expected to combat and prevent fire in the state.
FFS Controller General reiterated the need for citizens to have the emergency phone numbers of firefighting stations nearest to them.
“ Report all fire incidents on time wherever you reside, know the nearest fire stations to you and know their emergency telephone numbers.
“ We are asking Ekiti people to cooperative with the state government, state and federal fire services,” he said.
Liman disclosed that the FFS had plans to establish a Fire Volunteer Club, as he urged Nigerians to key into the new initiative.
“If we have volunteers we will now go to the grassroots and by so doing fire incidences will reduce,” he said.
According to him, Ekiti State Government is vast in the contribution and development of its fire service by the recent recruitment of 59 fire men, acquisition and refurbishment of fire trucks.

Between Araraume and PDP deadbeat quest in Imo North