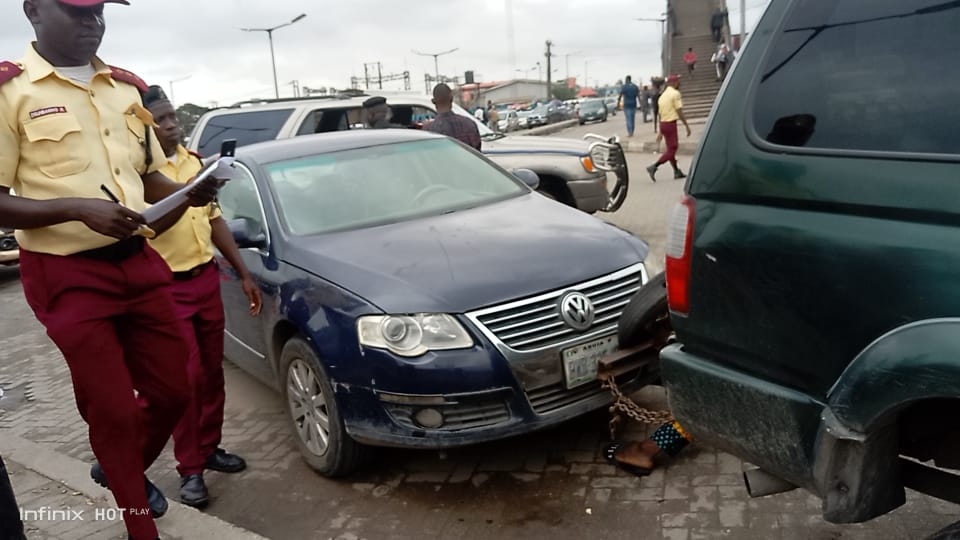 Due to the continuous perennial traffic gridlock usually being experienced around Apongbon inwards and outwards Lagos Island, caused by indiscriminate illegal parking of vehicles, garages and parks, 19 additional vehicles were again apprehended by the Lagos State Traffic Management Authority (LASTMA).

The General Manager, (LASTMA) Mr Bolaji Oreagba disclosed that the on-going total clampdown exercise embarked upon by the Authority was to generally ease off traffic flow to motorists particularly this approaching ‘Ember Months’ across the State.

Mr. Oreagba disclosed further that study conducted revealed that perennial traffic gridlock being experienced by motorists are caused by recalcitrant drivers who do not want to comply with the State Traffic Laws and Regulations.

He said that the on-going total Enforcement exercise which is expected to cover major identified spots is being coordinated by the Core Operations Commands (COC) from LASTMA Headquarters at Oshodi.

“I must implore law abiding citizens of Lagos State, especially motorists, to adhere strictly to the traffic law of the State in order not to run afoul of the law which has consequences. We must all have a positive attitude towards obeying the law of the State which was made to ensure orderliness and fast-paced socio-economic improvement of individuals, corporate entities and generality of the people”.

While assuring members of the public of the Authority’s commitment in ensuring free flow of traffic on all our roads, Oreagba urged drivers and general road users to be compliant with traffic laws, to make the ‘Smart City’ vision achievable in Lagos.

He However called on LASTMA officials to be more dedicated on effective traffic monitoring and management across the metropolis.

Speaking in the same vein, Mr. Peter Gbejemede the Director of Operations that led the team confirmed that immediately after the enforcement operations around Apongbon, CMS and Iyana-Oworo traffic was observed to flow better for motorists.

He maintained that drivers/owners of these new additional 19 apprehended vehicles would be arraigned at Lagos Mobile Court to serve as deterrent to others.

RE: PUBLICATION ON PURPORTED SALE OF POLARIS BANK