It was a show of shame at the Ondo State Magistrate’s Court on Thursday as a lawyer, identified as Barrister Anthony Oladele Thomas was docked for allegedly swindling his client of N4,775,000 being money realised from the sale of a property entrusted to the him to sell.

It was learnt that after the property was sold and was authorised to share the proceeds among three siblings, the lawyer allegedly fraudulently invested part of the proceeds in a Ponzi Scheme that went underground.

The charge read: “That you Anthony Oladele Thomas sometimes in 2009 in Ondo town within the Ondo Magisterial district did steal the sum of Four Million, Seven Hundred and Seventy-Five naira (N4,775,000) being part of the proceeds of sale of Feleonis property belonging to Olufemi Adesioye and family by fraudulently converting the money to your own personal use and thereby committed an offence punishable under Section 390(8)(b) of the criminal code Cap, 37 Vol. 1 Laws of Ondo State of Nigeria 2006.” 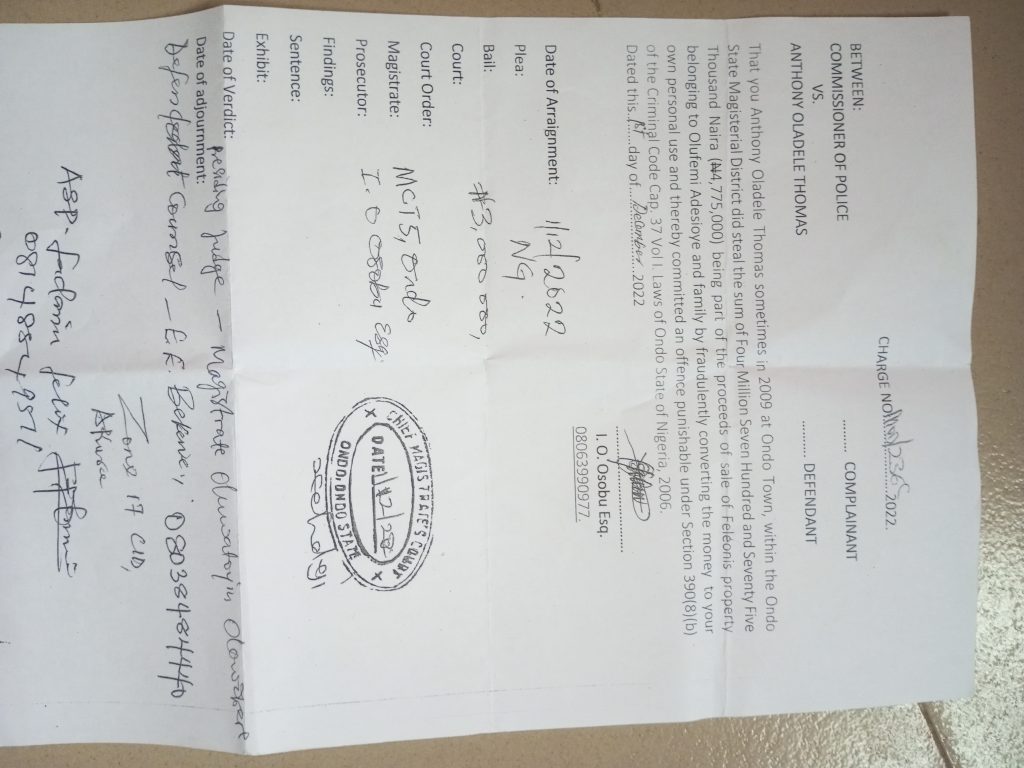 However, Town Crier News Nigeria investigation revealed that Oladele Thomas, resorted to every means to frustrate every attempt made, including his church in the past, to pay Mr. Isaac Idowu Akintade, who is now deceaseda, a sibling of a 90-year-old man, Pa Olufemi Adesioye, the balance of proceeds meant for one of the siblings.

Testifying before the Court, Pa Adesioye gave the genesis of how he and the mother entrusted a property to the defendant to sell in 2009, as a supervisor.

Explaining further, he told the court that he had engaged the lawyer to sell his grandfather’s estate located at Idishin, which was later sold for N16,000,000.

As a legal practitioner – a man in the temple of justice – supposedly imbued with so much trust, he was saddled with the responsibility to disburse the proceeds to three of Pa Olufemi Adesioye’s siblings.

Unfortunately, Pa Adesioye told the court that he never knew Barrister Anthony Oladele Thomas was “deceptive”, dressed in a false robe of a lawyer, whose clandestine motive was to confiscate part of the proceeds for his personal aggrandizement.

“Sadly, instead, the lawyer only disbursed money to two of his client’s siblings resident in Nigeria and kept one part (N4,775,000) met for Isaac Idowu Akintade, who was residing in London, but died about three years ago.

“Barrister Anthony Oladele Thomas has defaulted on an errand he was sent to carry out.

Three weeks before Idowu died in London, he (Idowu) wrote to me and asked: “Where is my part of the money?”

“I am appearing in the court to tell the whole world through the judiciary that he has not paid a Kobo to my uncle, who is entitled to N4,775,000.

“On Barrister Anthony Oladele Thomas’ claim that he invested in a wonder bank, I am just hearing that today in the court,” Pa Olufemi Adesioye reiterated.

“Before my sibling died, he wrote to me from London to say: ‘Barrister Anthony Oladele Thomas has not given me a dime, please, ensure you get it from him.’

“When I confronted Barrister Anthony Oladele Thomas for the money meant for my nephew, he resorted to threatening me and my brother with death hence I filed a petition after exhausting every option to get the money from him failed,” Pa Adesioye further explained to our correspondent on the court premises.

Part of the petition read: “Having the inclination that nature is fast taking its toll on me, I have deemed it imperative to lodge this complaint before you in a ‘Save My Soul’ manner, lest I be cheated till I return to mother earth,” Pa Olufemi Adesioye, who resides at No 1, Gbose Street, Agbala Maria, Ondo, stated in the opening paragraph of the three-page petition.

In a reaction on a telephone conversation with Barr Oladele Thomas, he denied that Pa Olufemi Adesioye entrusted any property to him to sell just as he also failed to tell who gave the said property to him.

Besides, Barr Oladele Thomas claimed to have paid an undisclosed amount to the deceased’s account number domiciled in the First Bank of Nigeria.

However, when asked how much he had paid that left a balance of N1.6m, he declined to comment but added that Pa Adesioye had no claim to make but added that he could make an application for the First Bank to transfer the money if he could prove it.

“If he is entitled to the money, let him prove that it is his money. He has been to the Independent Corrupt Practices Commission (ICPC); they told him the money doesn’t belong to him. He is desperate and has been going all over the place,” Thomas told our Correspondent.

He also claimed to have had contacts with the children of the beneficiary but when asked why he hadn’t remitted the money rather than allowing Pa Adesioye to lay claims to it, he revealed: “I am not in contact with the children now. However, whatever settlement that would come, it cannot be done in isolation of the lawyer to the children’s father.”

However, Thomas complained of the complicity of the police in the case, who had to dragged him to court without investigating the petition brought to the AIG Zone 17, Akure.

The Presiding Judge Oluwatoyin Olowokere, advised Barr Oladele Thomas to ensure he settles the matter with the family and adjourned the case to 17th of January, 2023 for hearing and granted a bail in the sum of N3m with two shorties.

In his summation, the prosecutor, Barr I.O Osobu argued that Pa Olufemi Adesioye has a cogent case against Barr Oladele Thomas, who has presented false bank evidence for payments he purportedly made.

On the other hand, all attempts to draw the presiding judge of a subsisting case at the High Court by the defendant’s counsel, Barr E.E Bekewe didn’t stop the court from hearing the case against Barr Oladele Thomas.