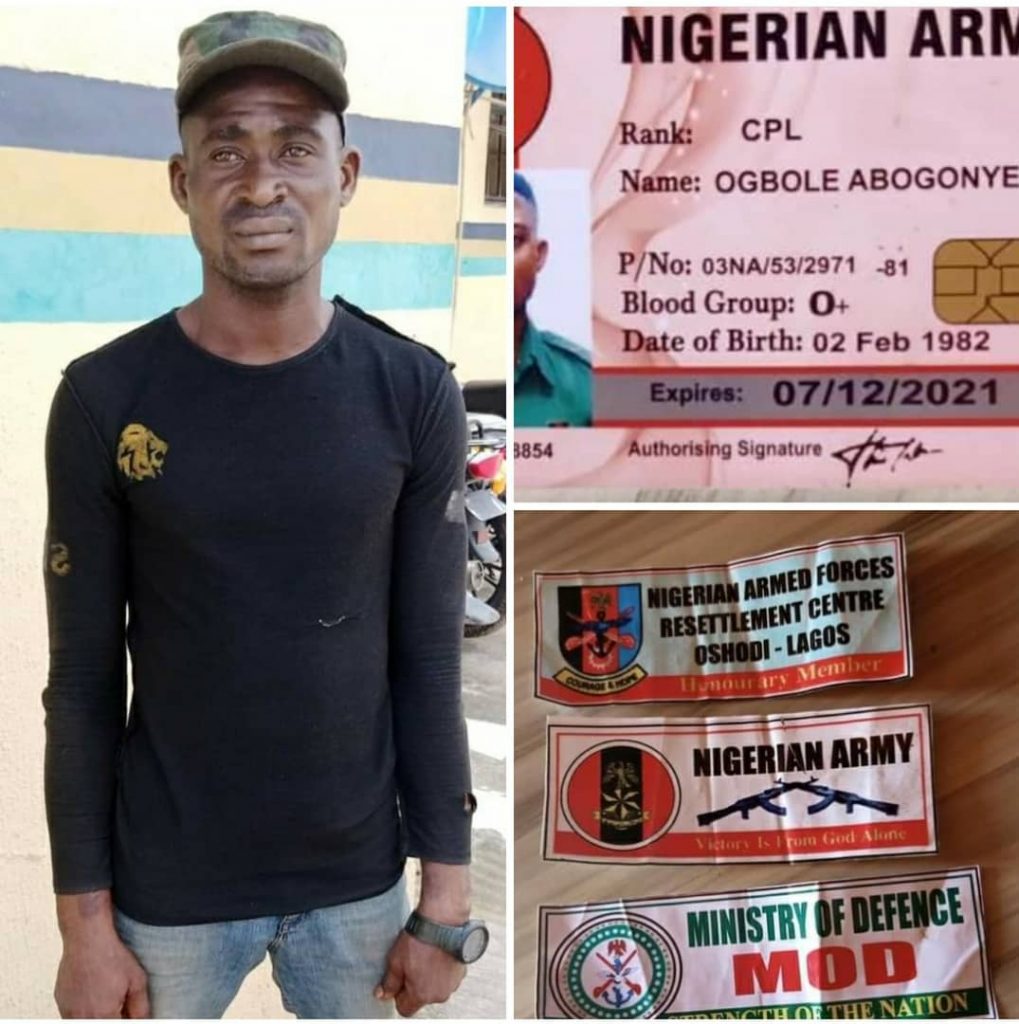 “You cannot eat your cake and have it”, according to a cliche. But for an erstwhile corporal in the Nigerian Army, the reverse is the case, for which he has ran into trouble.

The 38-year-old Army deserter, Abogonye Ogbole, has allegedly been posing as a serving soldier and has been arm-twisting unsuspecting transporters, comprising motorists, tricyclists and motorcyclists, in the Papalanto axis of Ogun State, until recently when his cup got filled to the brim, leading to his arrest by a team of detectives from Ewekoro Division.

Abogonye was trailed and tracked down at a drinking joint at Papalanto on Sunday, October 10, 2021, after he escaped arrest by a patrol team from the same police station the previous day.

in the early hours of Saturday, October 9, precisely at 1:00am, a team of patrol men on stop-and-search operation along Onigbedu Road, Itori, flagged down an unregistered motorcycle, with the suspect as a passenger.

The policemen, it was learnt, questioned the rider on his mission on the road at that odd hour.

Out of overzealousness and undue claim of superiority over the police, a phenomenon that is rampant among rank and file in the military, the suspect confronted the police operatives, whom he accused of delaying him, prompting the officers to demand for his identity.

Abogonye, while introducing himself said, “I’m an Army”, a statement that quickly aroused the detectives’ suspicion, coupled with his vituperation, they demanded for a proof of claim as a serving soldier.

To impress the men, the Army deserter first flaunted a Nigerian Army identity card and, thereafter, handed it over to the police team leader

No sooner than he gave out the I.D card than he realized that he had shot himself in the leg, and had to bolt.

With his escape, the police team became convinced that Abogonye was either having a sinister motive for being on the road that late or an impostor, following which the bike man was arrested and taken to the station.

When questioned on how he came about the Nigerian Army sticker on his motorcycle, the rider owned up to the effect that the fleeing suspect gave it to him and even forced him to paste it on the bike.

Coincidentally, as fate would have it, the Divisional Police Officer (DPO), Ewekoro, SP Tijani Taofeek, reliably gathered that some soldiers were regularly extorting transporters at Papalanto, with one of them noted for not paying each time he boarded a bike.

The DPO was said to have solicited for the cooperation of the informant to take a snapshot of the ‘soldier’ and send to him via WhatsApp, an arrangement that paid off.

While personally interrogating the bike man, the DPO presented the photograph to him, to ascertain if it was the said runaway ‘soldier’, to which he confirmed.

At that point, SP Tijani raised a team of crack detectives to the area and, with the cooperation of the informant, the suspect was smoked out from the midst of other fun makers at a drinking joint, even as he made frantic attempts to flee, but overpowered by the police team, who handcuffed and took him to the station.

At the station, the suspect, from whom, apart from the Army I.D card that was initially recovered, and from whom some other incriminating items, comprising an Army fez cap, assorted military stickers and Indian hemp were found, confessed to have deserted the Nigerian Army.

When contacted on the telephone, the Ogun State Police spokesman, DSP Abimbola Oyeyemi, said he was not aware, but would find out.