The Nigerian Army in line with the Chief of Army Staff’s initiative to constantly engage military veterans to strategize on new tactics and innovations to tackle security challenges in the country is holding a week-long workshop at the Muhammed Buhari Hall, Nigerian Armed Forces Resettlement Centre, Oshodi Lagos for Military Veterans from the South West Zone.

The Special Guest of Honour Commandant Nigerian Armed Forces Resettlement Centre Air Vice Marshal Idi Gamso Lubo in his keynote address disclosed that the seminar was to consolidate on the gains of the previous edition while addressing gaps in the employment of NA veterans in information gathering and other supporting roles to military operations. He added that the seminar was also expected to boost the morale of NA Veterans and give them a sense of belonging while enhancing their productivity/ welfare in retirement. 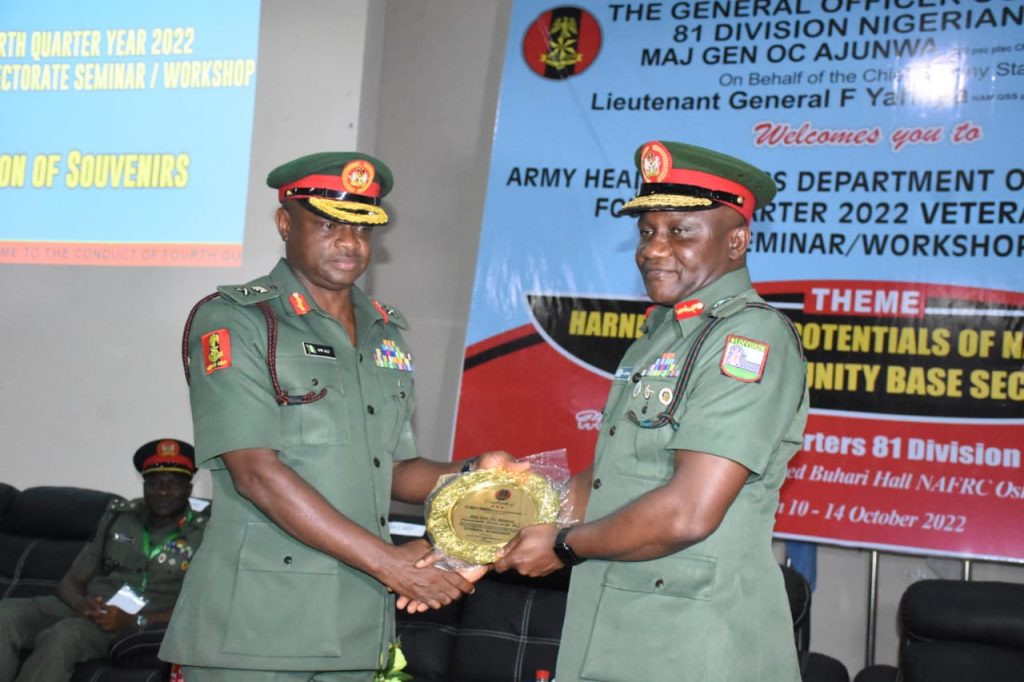 In a similar vein, the representative of the Chief of Army Staff who is the Chief of Administration Major General Okpeh Wilson Ali noted that the seminar has come to stay as it is being codified as an ongoing effort to re-engage the services of military veterans to continue to benefit from their wealth of priceless experience and professionalism gained over the years to enhance the fighting efficiency of the NA in its numerous internal security operations. General Ali states that the military veterans remain an important link between the NA and those at the grassroots bearing in mind their enduring roles in community security, especially at this critical time Nigeria is faced with diverse but sir surmountable security challenges. He, therefore, charged them to provide the NA with first-hand information on all that is happening within their localities toward tackling security challenges.

Earlier, in his welcome remarks the General Officer Commanding 81 Division Major General Obinna Ajunwa charged the participants to see the seminar as another opportunity to learn something new as they remain partners in securing Nigeria. He said he is convinced that the participants will leave the seminar better informed and equipped with the requisite knowledge to further contribute to community base security in the country. During the workshop, several well-packaged and thought-provoking lectures were delivered.

Dangote: Our acquisition of Obajana Cement plant followed Due Process