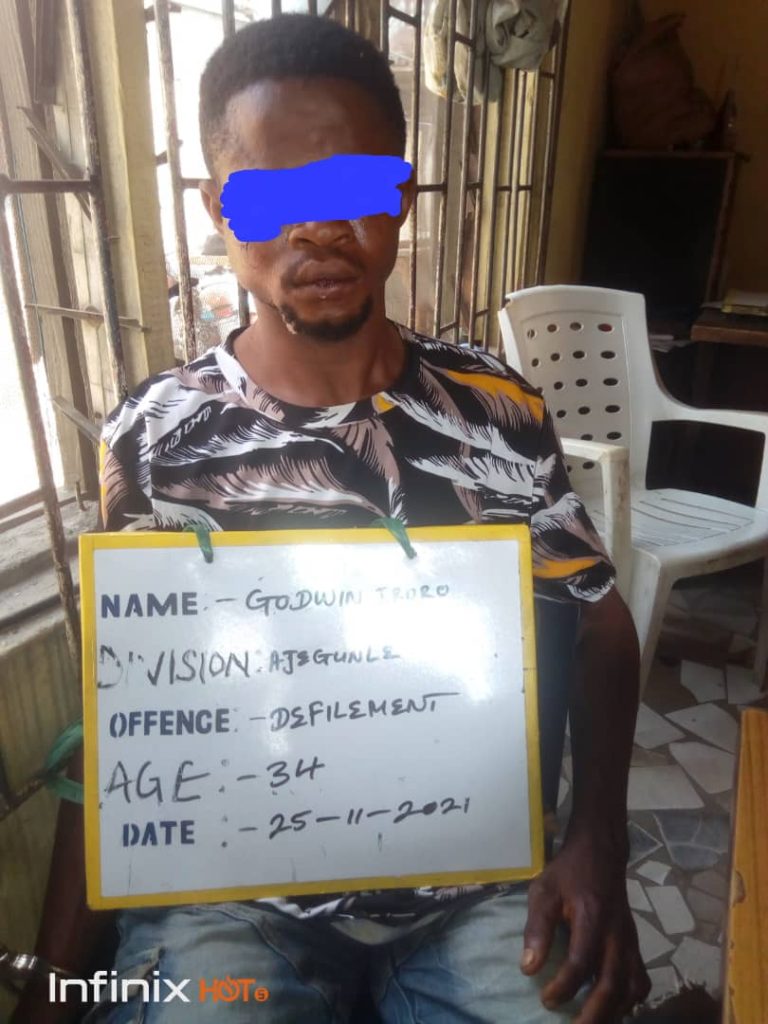 A 34-year- old married man, Godwin Iroro, has been arrested by police detectives attached to the Ajegunle Division for defiling his friend’s 10-year-old daughter (name withheld).

I a release issued by the Lagos Command Police Public Relations Officer, a Chief Superintendent of Police, CSP Adekunle Ajisebutu read that,

” The suspect was arrested on 25th November, 2021 following a complaint lodged at the Police Station by the victim’s father, Chukwudi Chime, who upon noticing the unusual and awkward movements of his daughter probed to know what happened to her.

The little girl when questioned, disclosed that her father’s friend, a father of four who also lives in the same house at 5, Iyalode Street, Ajegunle, Lagos, had carnal knowledge of her when her father was not at home.

Preliminary investigation revealed that both men are separated from their wives. While the victim lives with her father at the above address, the suspect’s four children live with their mother in Asaba, Delta State.

He added that,” The suspect, upon interrogation, confessed to the crime but blamed it on the devil. He also confessed to have sexually abused the little girl only twice before the evil was uncovered.

He stated that ” Angered by the beastly attitude of the paedophile, the Commissioner of Police, CP Hakeem Odumosu, immediately directed that he should be transferred to the Gender Unit of the Police Command for discreet investigation and diligent prosecution.

” The CP warns such licentious men who would not keep their restless manhoods in check to desist from such contemptible act or face the grave consequences. He Concluded.