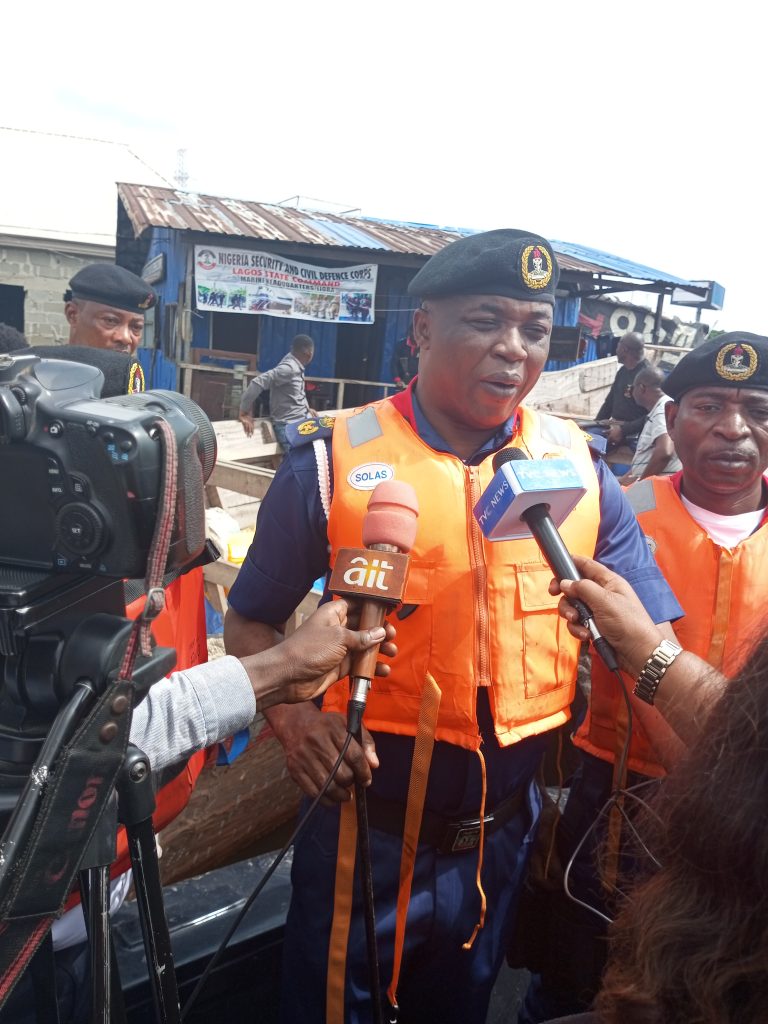 In line with the renewed and re – invigorated efforts of the Commandant, Nigeria Security and Civil Defence Corps ( NSCDC ), Lagos State Command, Commandant of Corps ( CC ) Edenabu Okoro Eweka, msc, acma, cna, against all forms of economic sabotage and other kinds of criminality, in Lagos State, the Anti – Vandal Unit of the Lagos State Command, ably led by its Head of Unit ( HOU ), Assistant Commandant of Corps ( ACC ) Musa Abdullahi Jibrin, who were always on constant routine surveillance and patrol, at the wee hours, of Monday, 17th October, 2022, intercepted a wooden boat, on the high sea, at Ilekan, around Ajah axis, loaded with blue and yellow kegs, containing about twenty four thousand, five hundred litres of product, identified, to be Premium Motor Spirit ( PMS ), also known as petrol, suspected, to be conveyed, to the neighbouring country, by the suspected oil thieves, who were eventually, nabbed, by our gallant officers and men. 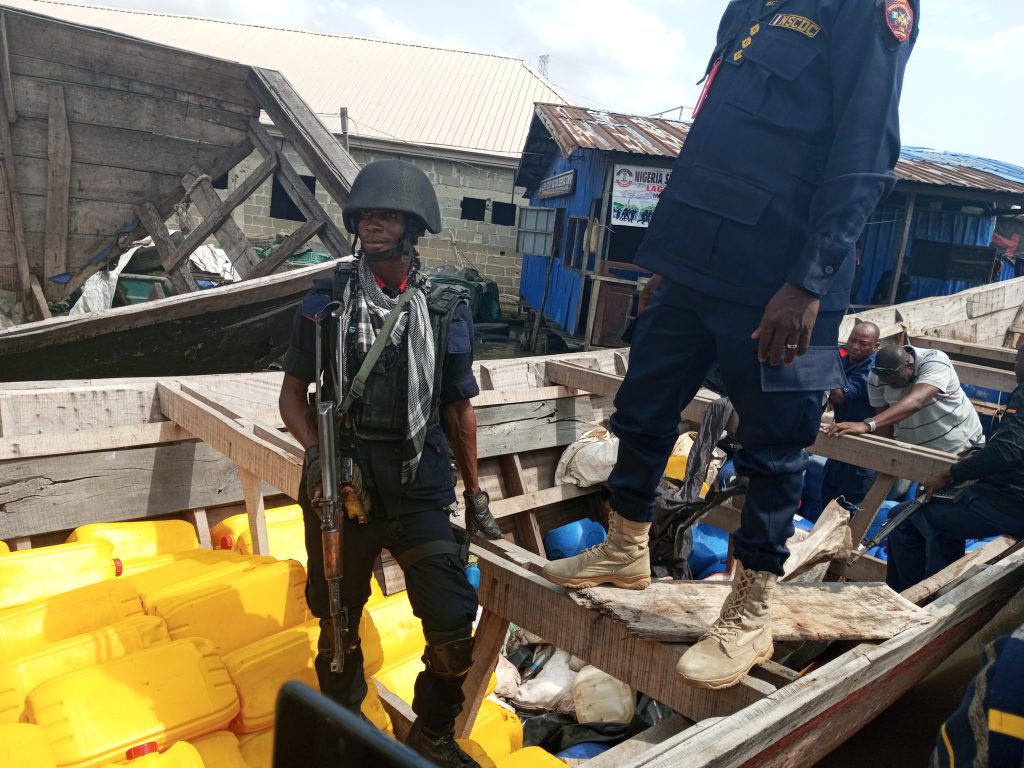 “The suspected stolen PMS, is estimated to be over four million naira only, at market value,” Commandant Edenabu Okoro Eweka,” said, while addressing some media men, at the Ijora Jetty beat of the Command, where the parade of two male suspects, namely; Olorunwa Sunday and Friday Bolaji and exhibits were displayed, yesterday, Tuesday, 18th October, 2022, at about 11:00hrs.

The Commandant, while affirming the Command’s unflinching commitment, towards eradicating all forms of economic sabotage, during the parade, yesterday, at the Ijora Jetty, in company of Deputy Commandant of Corps ( DCC ) Jimoh Olusola, ACC Musa Jibrin, the Command’s Public Relations Officer, Deputy Superintendent of Corps ( DSC ) Abolurin Oluwaseun and other gallant officers and men, immediately ordered, the Anti – vandal and Exhibit unit of the Command, to evacuate the recovered oil products back to the Command’s Head Quarters, in Alausa, Ikeja, Lagos, in a bid, to carry out further intelligent investigation, on the matter and find a lasting solution to such ugly economic sabotage in the state.

We are here again today to show to the public some unscrupulous element of the Nigerian society whose specialize in foreign federal government subsidies PMS to our neighbouring country Cotonou.

This group of people yesterday was caught on Sunday night stroke Monday morning was found carrying 400 quantity of 30 litres keg which is about 12,000 litres and about 2,500 Litres drum which is about 12,500 PMS .

Being transported to Cotonou PMS.

They were caught at Ilekan on the High sea by the vigilant Anti-vandals teams of NSCDC officers acting on intelligent information and these set of people you can imagine our interim reports reviews that they brought these fuel all the way from Eleko .

They are going in to Badagry where they have fuel they didn’t take it now going to republic of Benue.

Our vigilant officers apprehended them and they were now saying where is your master.

They said our master is on the road flying the road

This is the way they sidephone Nigeria subsidies PMS thereby causing government to waste revenue and we as a responsible agency we would not relent in our effort to put them down and not allow them to continue to it the federal government to shame,so that why we arrested them,others who are yet to be caught will learn that it is not good to sabotage the federal government and we will not allow such to happen in this our area that is our resolutely and we will continue doing it day and night thank you very much.

The next thing is for us to do diligent investigation and take them to court because they have no excuse to ferry federal government subsidies PMS.

They are intentionally going to Court and the court will decide what will happen to them.

The message to others is that NSCDC will assist to carry out thier duties under our able leadership leadership
And CG Abubakar Muhammed Audi has empowered us with logistic.

We will not tolerate sabotage or for them to continue to sabotage the federal government it is not in our record to allow that. Thank you very much.

Nyesom Wike has since launching his ill-fated presidential ambition appointed a number of PDP Governors (in alphabetical order: Okezie Ikpeazu x Abia; Samuel Ortom x Benue; Seyi Makinde × Oyo) as his political Aides. Ifeanyi Ugwuanyi of Enugu is the only inconsistent one of the lot.