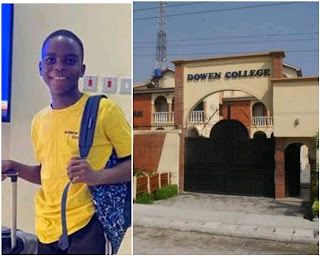 Following controversies that had continued to trail the death of a 12-year-old male student of Dowen College in Lekki axis, Sylvester Oromoni Jnr, the Lagos State Government has shut down the school indefinitely.

It said that the school would remain closed pending the outcome of the ongoing investigation the Nigerian Police and its agencies have embarked upon to unravel circumstances surrounding the death of Oromoni Jnr.

The closure came hours after the State government commenced investigations into the former student’s death to ascertain if the claims made by the family were true or not and to determine the role played by the school management after the deceased was said to have sustained injuries within the school premises.

Announcing the closure on Friday after a meeting with the School Management and Staff, the Commissioner for Education, Folasade Adefisayo, said that the move was to give room for adequate investigations on the former student’s death.

Through the statement made available to The Guild by the Head of Public Affairs for the ministry, Ganiu Lawal, the commissioner appealed to Nigerians particularly Lagosians for calm, saying no effort will be spared in getting to the root of the incident.

Earlier, Adefisayo explained that investigations would unravel what led to the injuries sustained by the deceased and other details needed to help establish the truth on the case after the family and the school management began to trade words.

She hinted that preliminary investigations revealed that the deceased was indeed enrolled as a student of the College in its boarding facility and that he was treated by the school’s medical personnel after sustaining the injuries.

The commissioner stated that it was after the treatment that the school management requested that the parents take the former student away for further care.

According to her, we reassure the family of the late Sylvester Oromoni Junior and Lagosians at large that efforts are being made to unravel the circumstances leading to his demise, even as we reiterate the Government’s commitment to Child Protection.

Adefisayo noted that after commencing the investigations, the state government delegation comprising top-level management of relevant Ministries, Departments, and Agencies as well as the Police, has visited the school on a fact-finding mission.

The commissioner, meanwhile, described Oromoni Jnr’s death as shocking and the State government was indeed sad about this great loss.

Digitalization And The Media – Akin Adeoya