Indigenes of Abomiti, Yeguda and Eyin-Osa Communities in Ilamija, Epe, Lagos State have send a Save Our Soul, SOS, Appeal to the Executive Governor of Lagos State, Babajide Olusola Sanwo to avert a possible Communal Face Off among the above mentioned indigenes over the Land Resettlement of the Three Communities.

The Lagos State Government had earlier in 2006 interfaced between the Three Communities following the acquisition of their Land for the Lekki Free Trade Zone, LFTZ, Project.

This has however led to controversy following allegations that somePolice Officers, which include; CSP Shola Jejelaiye and SP Salako, are allegedly acting on the Instruction of the State Commissioner of Police, Abiodun Alabi to forcefully take over the Resettlement Land under the influence of one Murphy Adebare, who is the Chief Executive Officer of Topaz Gardens Limited. 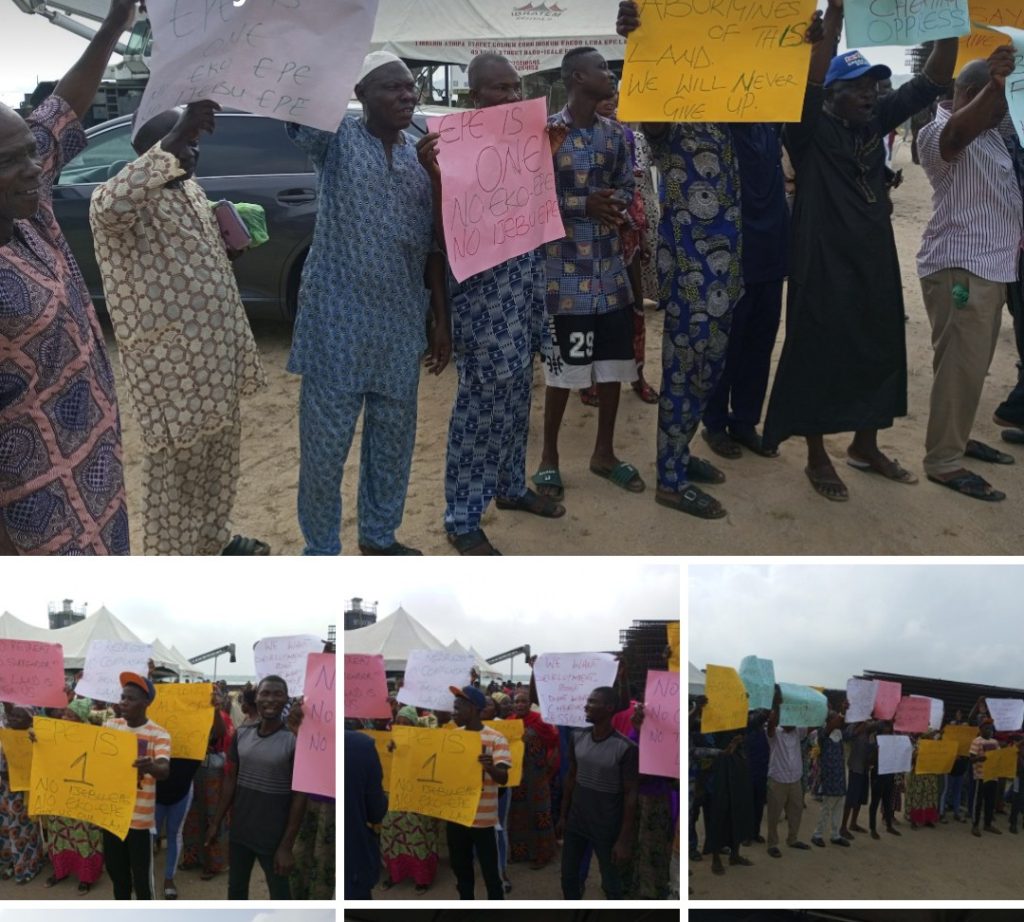 Lamenting the plot by the alleged Police Officers to forcefully take their Lands, the Mogaji of the Families who own the said Land, Semiu Olaiya Iyanda, said contrary to insinuations that Murphy Adebare is a renowned Land Grabber is False, as they seek the services of the Topaz CEO, stressing that the resettled communities got the Certificate of Occupancy No: 33/33/2022 and Survey Plan No: LS/D/BK 425/A after their customary and aboriginal lands were acquired by the Lagos State Government for the Lekki Free Trade Zone.

Iyanda stressed that ever since the communities took the possession of the said land, where the State Government resettled them, there have been efforts by Land Grabbers through the said Police to forcefully take the Land from them and Sell to their cronies. 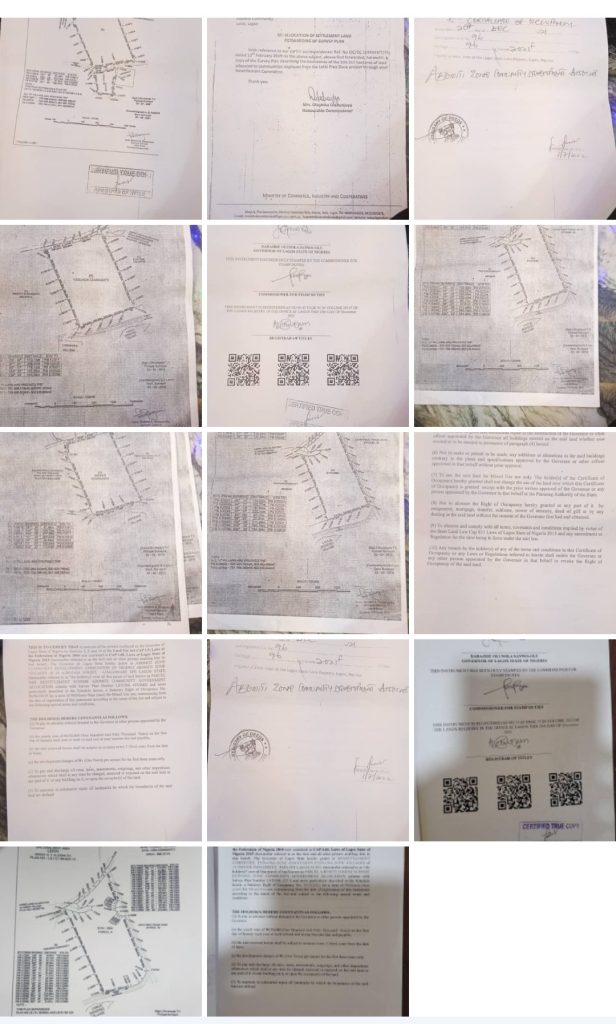 In a Press Released issued by the Families that owned the said Land, it categorically stated that SP Salako acted under the guise of Law Enforcement Officer, mobilized and led dreadful hoodlums to invade, forcefully took over and stationed the said armed hoodlums on the resettled communities’ land, which form part of Alagbon Village, and Eyin-Osa Government Resettlement Scheme at Ilamija.

It added that SP Salako is bent on forcefully taking over the communities’ land and handover it to their cronies who are also land Grabbers who is specialises in either using government acquisition land to defraud innocent land buyers, using of soldiers or Task Force allegedly led by CSP Jejeloye to hijack properties by force, in which CSP Jejeloye receives Kickbacks.

“It is embarrassing and disgraceful that, SP Salako attached to ACP Jejeloye is using the respected Nigerian Police Force Uniform, to forcefully takeover innocent people’s land for and at the behest of his connivers and business partners, who are renowned Land Grabbers in the whole of Ibeju Lekki, fraudulently taking over innocent communities’ land through the use of his partner in Police uniform for kickback, in person of one Murphy Adebare a.k.a Topaz Ajagungbale.

“It is more surprising that despite the Mobile Police on the land, whose the occupant of the said land had approval for, to protect the workers on the land against hoodlums, the said SP Salako unleashed his thugs and gave cover to the armed hoodlums to attack the said Mobile Police, duly approved to secure lives and property of the communities resettled on the land.

“This is basically an act by which Land grabber in Police Uniform, such as SP Salako, lead armed thugs who brandish gun and other dangerous weapons on the said resettled land at Ilamija, which contravenes the provisions of Sections 2 (1), (2), (3), 3 (1), (2), (3) (a) (b), (4) (a) (b) of the Lagos State Properties Protection Law 2016, which prohibit forceful take over of other people’s land with the use of violence or stationing of Land agents, use of thugs, or hoodlums to intimidate or scare away people from the Land and or illegal occupation of property and peg the punishment at Ten (10) years imprisonment.

“While Sections 5, 6 & 7 of the Lagos State Properties Protection Law 2016 prohibit the use of Land agent and or Illegal use of Law enforcement agent, Vigilante group, ethnic, cultural/traditional militias and or encroaching with a weapon and peg the punishment at Ten (10) years imprisonment without option of fine.

“After the soldier-like invasion of the communities’ land by SP Salako who led thugs on the land, the communities petitioned the Inspector General of Police, Force Intelligence and Investigation Department, complaining of the un-police-like and unethical acts and behaviour of SP Salako, who is said to be acting under the leadership of CSP Ishola Jejeloye of Lagos State Task Force, who is also taking order from the Commissioner of Police of Lagos State, CP Abiodun Alabi, who are hell-bent on forcefully taking over the communities’ land, constructing a new fence after demolishing the first fence on the land.

“Upon our petition to the DIG FCIID, there was a standing order that the officers on the land should be withdrawn with immediate effect but despite the instruction, the CSP Jejeloye redoubled the officers who invaded the land, led by SP Salako.

“It is essential we bring to the public notice that, these acts of SP Salako, and those behind his activity can bring about communal clash that may degenerate into crisis. Hence, our reason for calling the public attention to the issue, to take note and hold responsible CSP Ishola Jejeloye and SP Salako for any act of breach of Peace on the Abomiti, Yeguda and Eyin-Osa Resettlement Land at Ilamija, Epe Lagos”.

The communities is however stressing that it is rendering its displeasure of how the matter is being handled by CSP Ishola Jejeloye and SP Salako, claiming to be acting under the instruction of the CP Alabi, as the officers have shown signs and tendencies of bias against them and wants to forcefully take over the land. 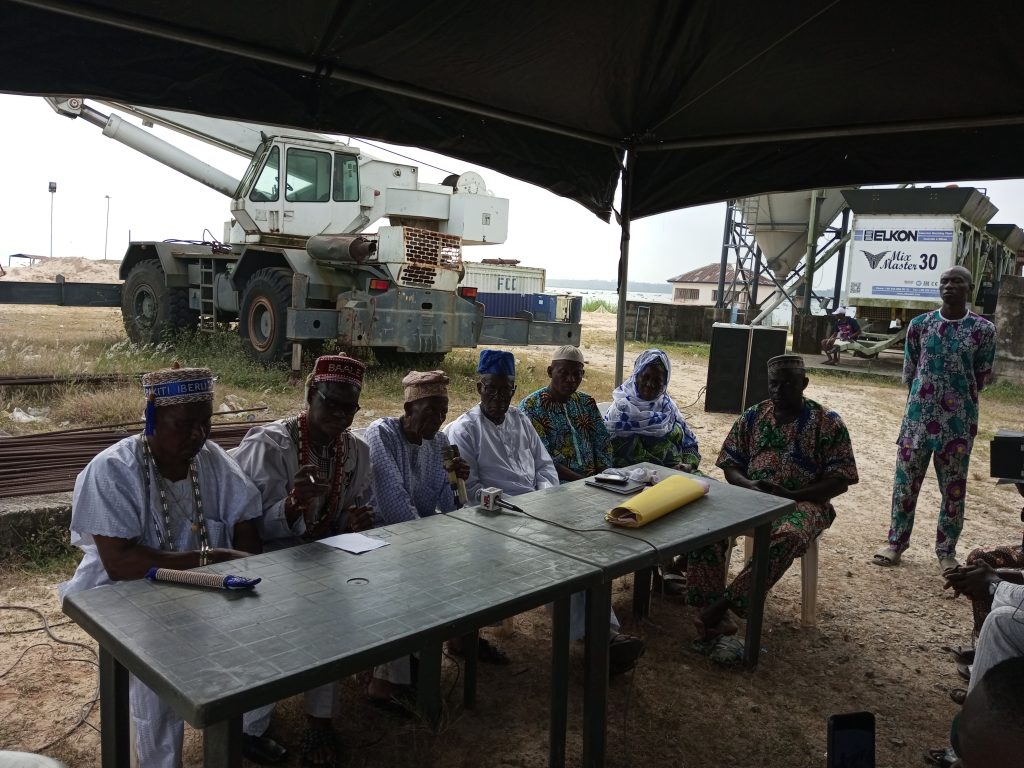 Hence, they are calling the attention of the office of Inspector General of Police and Governor Sanwo Olu to Wade into the matter and bring the indicted Police Officers to book and further investigate their dastardly acts, by instructing an unbiased police team to investigate the case meritoriously and justifiably.

“We are law abiding citizens and would not want to take Laws into our hands, by engaging thugs to combat the said SP Salako and his hoodlums on the land as he currently placed them on our land. We have never doubted the confidence and trust reposed in your highly respected office by the general public to do substantial justice to the complaint above, regardless of whose ox is gored”, the communities claimed.