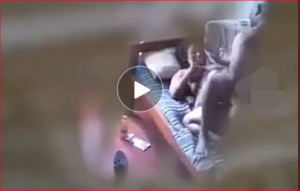 Stubborn Son Records Father in Bed with Another Woman To Show It to Her Mother As an Evidence, But Video Leaked and Goes Viral

The atmosphere on the information superhighways, thus, social media took a different turn after a wild footage hits the various platforms.

The said hard to believe video went viral after hitting online, thereby attracted much attention and also generated endless conversation among users privy to it.

In more details, a Nineteen (19) year old Anagie Gamalu has recorded his mother’s new husband while in bed with another woman.

Anagie, according to the reports has been reporting to the mother about the infidelity on the part of her new man but the mother rejects.

One afternoon when the mother was off to the market, the man, Samuel Onwowola brought in another woman not knowing the son was resting in his room next to theirs.

He therefore recorded the act secretly and showed it to his mother after her return from the market as an evidence.

The video has now gone viral after it mysteriously made way onto the internet.

NSCDC PROMOTES 5010 OFFICERS AND MEN ACROSS BOARD