Wednesday, the 28th of December 2022 is a day that will not be forgotten in a hurry by many families across Lagos State.

The day which started like every other day recorded the successful hosting of the much-talked-about 7th edition of the annual charity concert called GLOWFUX.

GLOWFUX Charity Concert, an initiative of Fanafillit Integrated Concepts, is an annual end-of-the-year charity event that brings together children from orphanages/special needs establishments for memorable end-of-the-year celebrations with the general public.

In its usual style, the event had loads and loads of games for both adults and children without any form of discrimination, and winners of each competition which were ably anchored by the popular children’s party MC – Daddy Yo went home with a variety of souvenirs courtesy of Rite Foods, Omo Detergent, FIDSON Healthcare and Beloxxi Biscuits and Bobo Foods. Noteworthy as well is the scholarship in ICT by Epeetech Solutions for five individuals from Lofty Skills Soccer Academy who emerged the most outstanding in a brain tease game.

The hallmark of the event was the induction of new GLOWFUX Young Ambassadors who were charged to become promoters of the humanitarian cause and other charitable initiatives. The new young ambassadors are Master Diamond Olowu, the popular child music act Vanessa Jones, Miss Hidarat Aroyewun and Miss Oluwadarasimi Kalejaiye. 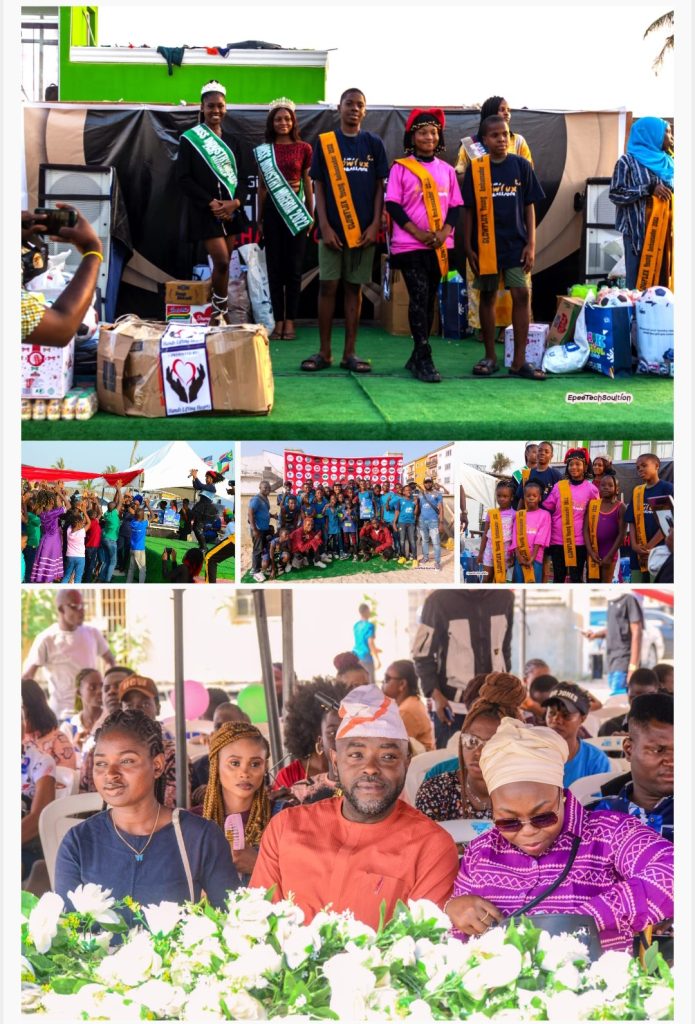 Also recognised was Ambassador Gbolahan Odukoya who was appreciated for his remarkable contribution to the success of the GLOWFUX Charity Concert 2022.

All the beneficiary establishments carted home lots of gift items ranging from clothes, food, household items etc., courtesy of the over 200 guests each of whom arrived at the event with gifts for the beneficiary homes.

As everyone at the event was entertained with superlative performances by MC Wadada, Da’Fresh Olorin, Vanessa Jones, Meyrah, First Class Comedian, Hilary Jackson, DBard Creative Media, and Dom Sax etc., so were they all treated to refreshments like biscuits, sausage and drinks courtesy of Beloxxi Biscuits and Rite Foods. And at the end of the event, everyone left with souvenir bags containing well-packaged jollof rice prepared by Beeth Events Concepts and other branded products courtesy of FIDSON Healthcare PLC, Rite Foods, Beloxxi Biscuits and Omo Detergent.

It is worthy of note that this edition of GLOWFUX Charity Concert would bring to the record, a total of 13 special needs (government-owned and private-owned) establishments with over a thousand children and adults that have benefited from the project since inception.

HOW TO EARN MONEY ON STREAKK BLOCKcHAIN WITH...

Over 50 Million Naira Up for Grabs in...