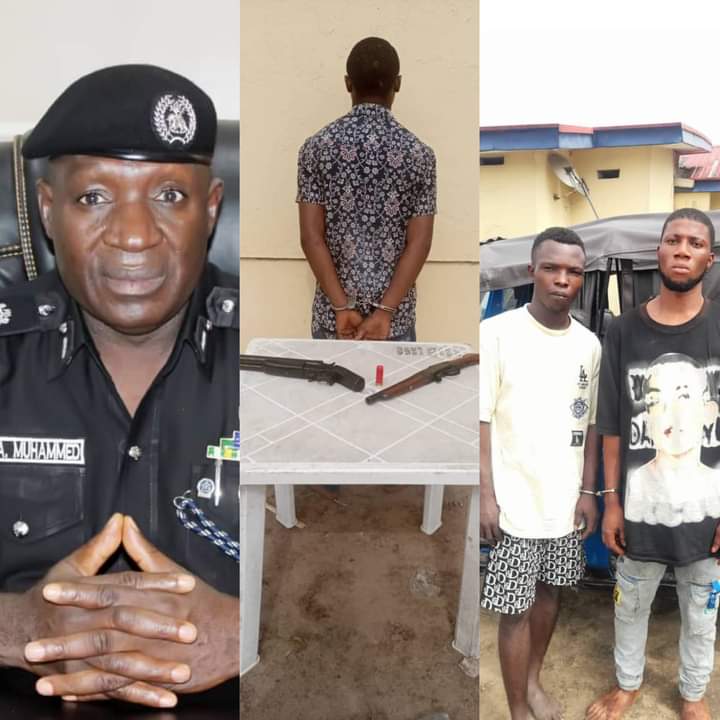 Delta State Police Command was On February,  21 2022 at about 2025hrs, a distress call was received from an unidentified person from Otu-Jeremi Community in Ughelli South LGA, that some hoodlums stormed the Community and kidnapped a young man along with his Toyota Corolla car. The DPO Otu-Jeremi Division swiftly detailed patrol teams who went on their trail but before their arrival, Policemen attached to Counter Terrorism Unit, Base 5 Warri who were escorting their principal coincidentally ran into the hoodlums. They trailed the hoodlums to Ekrokpe Community. The hoodlums upon sighting the Police, shot at them and the team retaliated. The vehicle was successfully demobilized by the team and one of the suspect Onwuka Kelly, age 23yrs was arrested while the victim (name withheld) age 37yrs of Egbo-Urhie Community of Ughelli South LGA was rescued unhurt. The following exhibits were recovered from the suspect: one (1) cut to size double barrel gun, one (1) cut to size single barrel gun and one (1) live cartridge. Investigation is ongoing
2. On the 22/2/2022 at about 1030hrs, acting on information received from a tricycle(Keke) rider that two young men flagged him down at PTI junction Effurun and hired him to convey them to Agbarho. The Tricycle rider further stated that on getting to Agbarho bridge along Ughelli-Portharcourt Expressway, one of the passengers hit him on the head, forced him out of the tricycle and robbed him of his tricycle. The DPO Agbarho Division detailed operatives to investigate with a view to arresting the suspects and recovering the tricycle. Consequently, on the 23/2/2022 at about 1200hrs, upon an intelligence led investigation, the hoodlums were trailed to their hideout in Eghwarha road Agbarho, where two (2) suspects namely: Goodluck Ahirima ‘m’ age 24yrs and Charles Oyibocha ‘m’ age 24yrs were arrested and the snatched tricycle recovered. Investigation is ongoing.