LSSTF Board Holds Meeting, Agrees to Reposition the Fund to sustain Mandate

The Board of Trustees of the Lagos State Security Trust Fund has held its Y2022 LSSTF Board Retreat, and first physical Board meeting (after inauguration in June 2020).

The meeting was held on February 5, 2022 at the Radisson Blu Anchorage Hotel, Victoria Island. 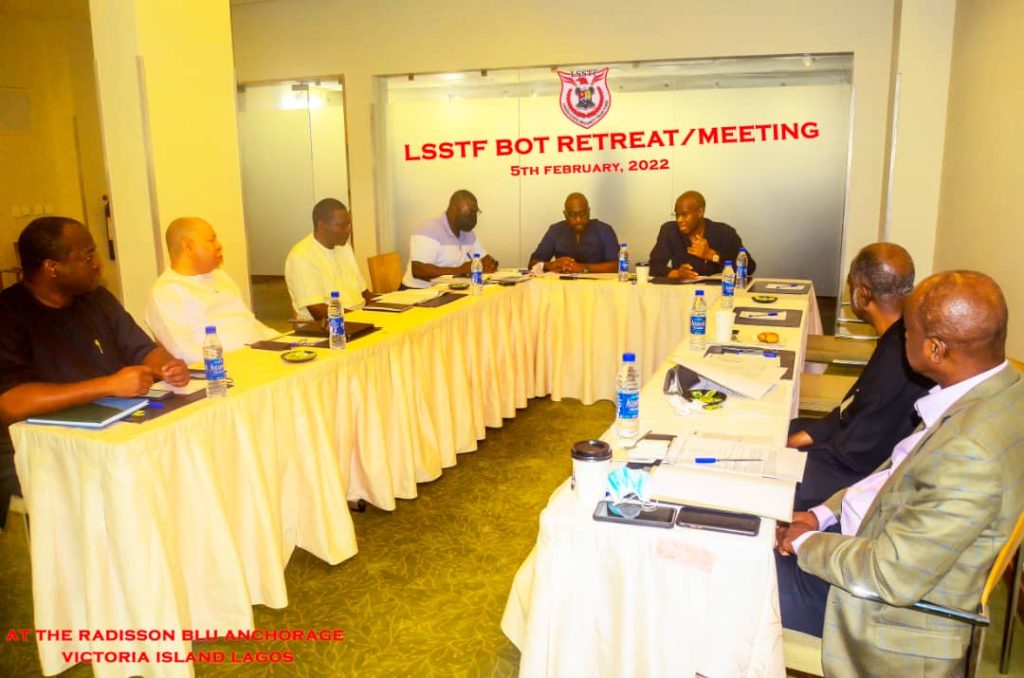 At the retreat, the Board deliberated extensively on the various security matters in the state and how to reposition the Trust Fund to meet the demands of security agencies, as the Fund continues to be the only veritable organ for the sustenance of security of lives and property.

The newly deployed Commissioner of Police, Lagos State Police Command, CP Sylvester Abiodun Alabi and the Commander Rapid Response Squad (RRS) CSP Olayinka Egbeyemi were also on hand to give updates on the security challenges experienced, and what may be required to enhance their activities for better policing of the state.

The Commissioner of Police, who noted that Lagos was a familiar terrain, shared his policing agenda for the State which can be summarised in “Visibility Policing” and noted that the Rapid Response Squad will be strengthened to ensure quick response to emergencies.  He also noted that the fundamental human rights of residents will be respected and not violated under his watch.

He commended the efforts of the LSSTF over the years as the major force behind their achievements and eulogized the state government under Governor Sanwo-Olu for his proactive approach & support. He further seized the opportunity to make some germane requests that will enhance his performance.

The Commander, RRS also shared with the Board, the accomplishments of the Squad and gave a first-hand illustration of their role while highlighting the importance of a vibrant and well-kitted squad in projecting a decent and respectable image for the officers. He also gave ideas about how the Squad can be better improved for maximum results.

The meeting ended with the Board being better informed of the enormity of the task before it and they resolved to maximise the first quarter of the year to work assiduously to achieve the set out goals in furtherance of the mandate given to them of facilitating safety and security in Lagos State particularly as we approach the campaign activities ahead of the 2023 general elections.