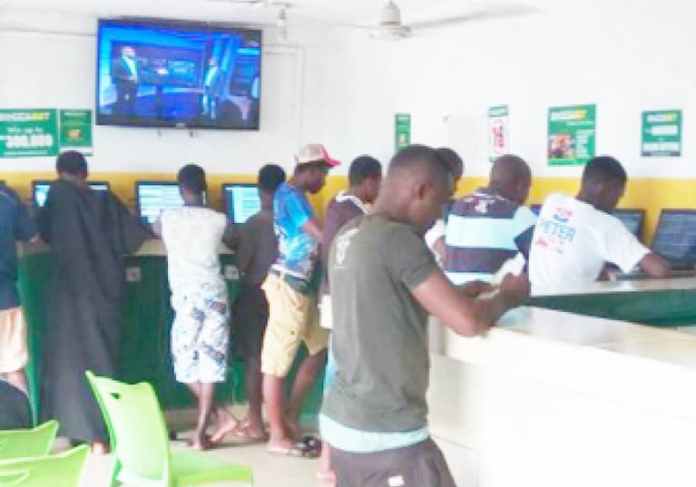 In view of the prevailing economic situation, sports betting, hitherto viewed as a taboo, especially by adherents of the two leading religions, Islam and Christianity, has become a lucrative business for most Nigerians.

Consequently, it is now common to see youths and the elderly across both sexes engaging in sports betting as they all battle to make ends meet. In the end, while some smile to the banks, others are left with bitter tales.

So many decades ago, coupons were in vogue as bettors would go to betting shops to play what was then known as “pool”. At that time, it was degrading to be identified as a bettor.

However, with the advent of website technology, sports betting has undergone a major transformation. Now, a larger percentage of sports bettors wager bets from the comfort of their homes.

This development has caused an astronomical rise in sports betting companies and sports shops across Nigeria.

At the moment, there are more than 36 betting companies that have been issued licences to operate in Nigeria. However, the most prominent among them are KC Gaming Bet (Bet9ja), Betway, Nairabet, Naijabet, Betwinner, Betbigi, Cloud Bet, Sportybet, iBet, Access Bet, BetLion, Melbet, MERRYBET, BETKING and ZEBET.

As business enterprises, these companies have also cashed in on Nigeria’s huge population and have extended their tentacles to cover the nooks and crannies of the country.

There is hardly any part of the country that the presence of the betting companies is not felt. Despite of electricity challenges, they can be reached both online and offline.

Despite the economic benefits associated with sports betting, it remains a double-edged sword. For those who have become addicted to it, the prices they pay for losses incurred far outweighs the gains they make after weeks, months or years of trying.

It is, therefore, worrisome that sports betting has suddenly become a serious social problem.

Those who take Roger’s wise counsel for granted have paid dearly as amplified in the responses of some bettors who shared their experiences with Daily Trust on Sunday.

It has indeed been a sweet-bitter experience for many Nigerians, especially the young ones who have become addicted to sports betting.

As a matter of fact, many can tell when they formed the habit, but it is not always easy for them to say when they will get out of it. The hope and optimism of hitting the jackpot has pushed many to the brink. In an attempt to win, many have lost fortunes.

Abbey (not real name), who resides in Lagos has become deeply involved in sports betting.

The middle-aged man who is a civil servant, said he betted regularly but that he had not been able to hit a jackpot despite the huge amounts of money he had spent on it.

He said, “I have squandered a lot of money on it, but I have been winning too. But what I am winning isn’t really commensurate with what I have spent. There is always this push to want to play anytime I see any money.”

He further said there was a game to play at every point in time on a daily basis as, “There is a game you can play in the morning, at night and in the afternoon. I usually take a stake as soon as I earn money.

Seun Olaonipekun, a shoe maker, who used to bet while he was an undergraduate, confirmed that the highest amount he ever put into betting was N25,000.

Olaonipekun said, “I betted using my school fees at that time. Unfortunately, I never won. N25,000 was the highest I ever put into it.

The money was my school fees. I didn’t know what came over me, and I did not win.”

Speaking to our correspondent, a Kano resident, Sadik Muhammad, who is in his early 20s, said he was introduced to sports betting by a friend and so far the highest amount he had won was N150,000, but noted that he had lost over N600,000.

Mohammed, therefore, said he wanted to stop betting but that he could not as he kept going despite the pain of losing huge sums of money.

He said, “I wish and pray that I can stop sports betting, but I am already used to it.

Although I have lost huge amounts of money, whenever a side hustle comes up, I do it to earn money so that I can go and bet; it gives me joy.”

Abubakar Usman, also in Kano, shared his experience, saying he started sports betting on his own in order to meet some pressing needs, and that the highest amount he had won was N40,000, while losing over N100,000.

Usman said, “I used to see my friends with expensive stuff and I knew they weren’t doing any business. Later on, I discovered they were into sports betting, that was why they were buying new phones, new clothes and what have you. I was lured by that and now I am trapped in sports betting; I cannot do without it.”

Bilal Abubakar who said through sports betting he now understood what it meant to win or lose a gamble, noted that he regretted why he went into sports betting.

According to him, the desire to live a luxurious life led him to betting which has left bitter tastes in his mouth.

He said, “If one is yet to start betting, I would advise him not to go into it. Betting is all about chances. You either win or loose.

I am still regretting why I joined sports betting, and it annoys me because I cannot stop.”

Our correspondent in Kano also gathered from some agents of sports betting companies that they suffered daily transfer of aggression as bettors sometimes visited their disappointment and frustration on them.

In Bauchi, some bettors opened up to our correspondent on why they are into sports betting and how getting out of it has become herculean.

A betting shop operator, Shadrack Mark, said, “I hope to get my breakthrough from sports betting.

I know a few people who have won big. Maybe one day I will win big. I don’t think I can stop.”

Another resident of Bauchi, Sadiq Abubakar, who is a teacher, said, “I started in 2017 when a friend introduced me to it. I see it as fun, and again my passion for football led me to betting.

I have won a couple of times but I look forward to stopping soon as my religion forbids betting.”

In one of the “nearly-won-it” stories which are common among sports bettors, a soldier who gave his name as Effiong said, “I started betting in 2016 and I won some money. But for a match where a club just refused to score a goal, I would have won N41m. Had it been I won that money, I would have left Nigeria to begin a new life in Europe. I’m used to betting and I don’t think I can stop.”

On his part, a student of Ahmadu Bello University (ABU), Zaria, Amar Isma’il, said most Nigerians had made sports betting their source of livelihood because of unemployment.

He said, “Presently, many sports betting companies are springing up in the country because of the huge patronage they and their agents are enjoying.

Most Nigerians are unemployed so they have to bet in order to survive. Unfortunately, some of them stake their last kobo without winning anything.”

A resident of Kaduna, Baba Shehu, named depression among the negative consequences of sports betting.

He said, “Most times, sports betting enthusiasts become depressed when they lose coupons they presumed were sure wins.

“It could lead to deviant behaviours because sports betting is addictive.

Such an addiction, sometimes lures others into stealing or using money entrusted in their care for betting.

In the end, they suffer losses and are left to face dire consequences .”

Recently, two university graduates in Abuja landed into trouble after they betted using money they were given for different purposes.

On Abacha Road in Mararaba, Nasarawa State, Msughter Atetan (not real name) got more than he bargained for after he used the money that was given to him to buy school materials for his niece to bet.

The Benue State University graduate who lives with his elder sisters had to run away from them when it dawned on him that they were ready to take him to the Abacha Road police station.

Our reporter gathered that when he eventually showed up after three days, he was drunk, claiming later that he went and drank himself to stupor with his friends because he wanted to forget his sorrows. It took the intervention of his eldest sister who compelled him to write an undertaking to be of good behaviour for him to be allowed back into their apartment.

A businessman, David Egbo, also narrated how his cousin who visited him in Mararaba, New Karu, Nasarawa State, caused him a lot of embarrassment. He said the graduate of Benue State University was a betting addict.

He said, “My cousin came around to submit applications but ended up embarrassing me. When it was time for him to travel back to Otukpa, I gave him a transport fare of N4,500. Few hours later, he returned home in his pants. Everybody in our compound was just laughing at him.

“When I investigated, I discovered that he went to a betting shop and played with his transport money. After losing, he decided to play on credit.

It was when he lost again that the shop attendant forcefully collected his bag containing his credentials and other belongings. As if to nail his coffin, he was stripped of the clothes he was wearing.

“I sent him out of my house.

I later learnt that his parents sent money for him to travel back.

As a matter of fact, we have not spoken, so I don’t even know if he was able to regain his bag and other belongings.”

The above incidents aptly capture the prices that most Nigerians, especially the youths pay simply because they cannot take their eyes off betting.

To make matters worse, as if there is no regulation, even teens are commonly seen patronising betting shops.

However, the federal government agency responsible for regulating betting activities in the country has said it was keen on regulating the lottery sector.

Only recently, the National Lottery Regulatory Commission (NLRC) warned against the engagement of underage Nigerians in lottery.

It stated that anyone participating in the lottery would have to be 18 years and above.

However, in view of noticeable infractions, effort was made to get the Head of Public Affairs of the commission, Mr Magnus Ekechukwu, to speak on the level of compliance with the directive by sports betting operators and their clients.

Unfortunately, all effort proved abortive as he neither responded to phone calls nor an SMS sent to him by our reporter.

Why more children are having high blood pressure –Cardiologists

Nigeria Fails To Qualify For World Cup After...

SAMI RUNS FOR A WARRIOR AT RUN LAGOS...